A classroom at Alexander Hamilton High School in Los Angeles Unified School District (LAUSD) appears to be showcasing hateful, anti-America propaganda on its walls, including the messages “FUCK THE POLICE” and “FUCK AMERIKKKA. THIS IS NATIVE LAND,” as well as the Black Lives Matter, Palestinian, “modern PRIDE,” and transgender flags.

A parent of a student at the school exposed the grotesque agitprop to Parents Defending Education (PDE), and provided photos ostensibly snapped by their child. The apparently shocked parent described their dismay, calling the incident the “disgusting brainwashing of students with taxpayer dollars,” according to PDE. 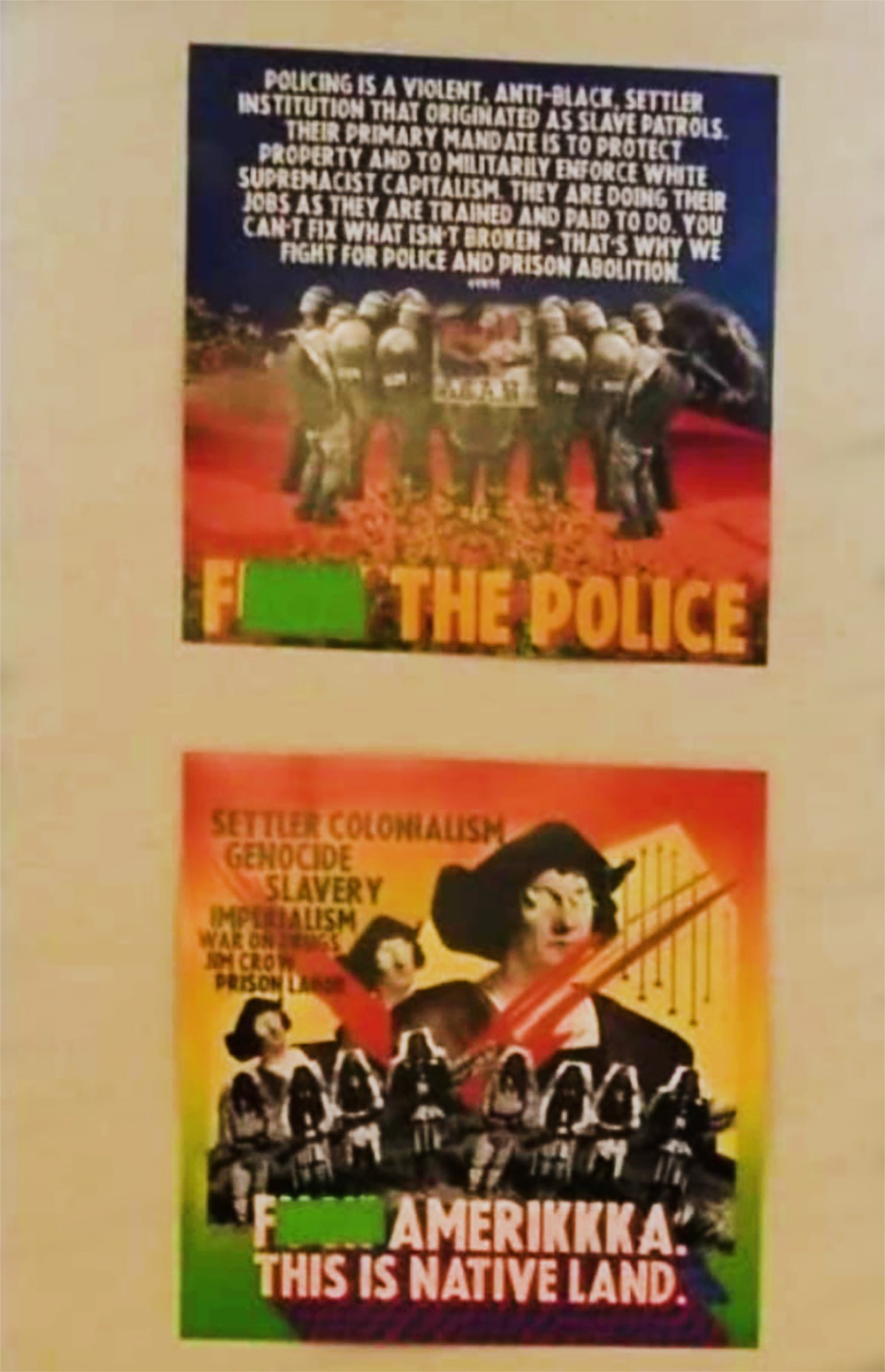 Propaganda posters on the wall of an LAUSD high school classroom. (PDE). [Brightened for clarity].

POLICING IS A VIOLENT, ANTI-BLACK, SETTLER INSTITUTION THAT ORIGINATED AS SLAVE PATROLS. THEIR PRIMARY MANDATE IS TO PROTECT PROPERTY AND TO MILITARILY ENFORCE WHITE SUPREMACIST CAPITALISM. THEY ARE DOING THEIR JOBS AS THEY ARE TRAINED AND PAID TO DO. YOU CAN’T FIX WHAT ISN’T BROKEN — THAT’S WHY WE FIGHT FOR POLICE AND PRISON ABOLITION. [Emphasis added].

Meanwhile, the anti-America poster appears to depict Christopher Columbus and implies that the United States is inextricably tied to the Ku Klux Klan. 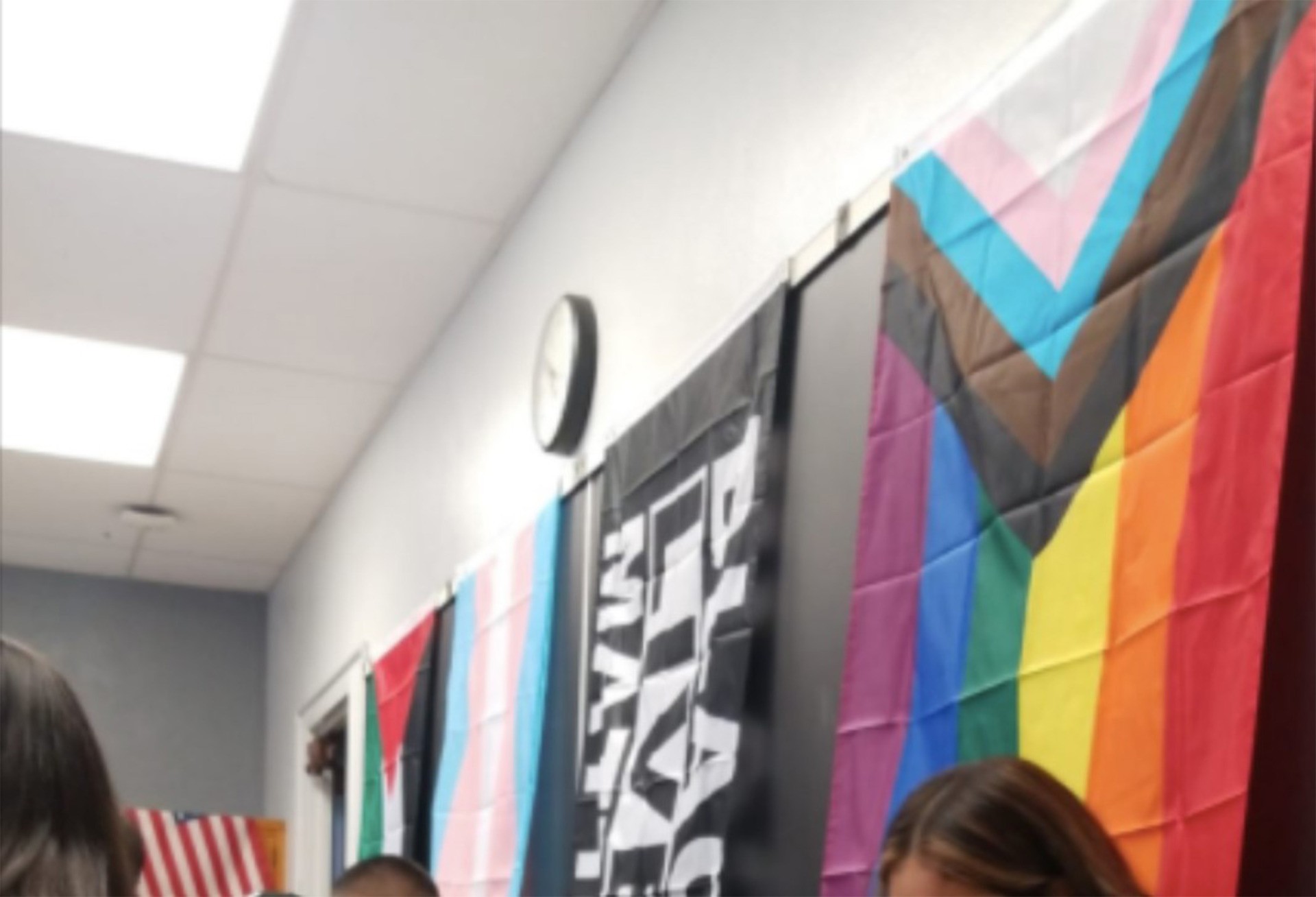 Photo showing flags across a wall in an LAUSD classroom. (PDE).

In response to an inquiry made by PDE to LAUSD, the district replied in part that:

Any displays that are determined to be overtly and objectively political or otherwise run afoul of our policies of inclusion and respectful treatment of others will be taken down and will be handled administratively. Nevertheless, not every subjective belief that any one display is “political” can be accommodated in a district as large and diverse as L.A. Unified. [Emphasis added].

PDE wrote about LAUSD, citing U.S. Supreme Court case Garcetti v. Ceballos, 547 U.C. 410 (2006), that “school officials appear to misunderstand the role of teachers and the freedom of expression they enjoy while on the clock. … Public employees are not insulated from employer discipline under the First Amendment when they make statements pursuant to their official duties.”

“When teachers make statements, advocate for particular points of view, and/or post specific items on walls or bulletin boards, they are acting pursuant to their official duties,” PDE concluded. “They do not have unfettered First Amendment rights.”

It is yet unclear as to whether action will be taken to remove the propaganda.