Democrats on the New York City Council are eyeing a plan to allow nearly a million non-citizens the ability to vote in local city elections.

The plan, backed by 34 Democrats on the 51-member New York City Council, would allow non-citizens with green cards, visas, and work authorization to vote in city elections so long as they have resided in New York City for at least 30 consecutive days.

The plan indicates that legal immigrants on green cards or an employment visa who have lived in New York City for at least a month would be able to vote for mayor, comptroller, public advocate borough presidents, council members, and changes to city policy.

Ydanis Rodriguez, a Democrat councilmember who represents the Washington Heights neighborhood in Manhattan, told NY1 that “we need to recognize the contributions of our immigrant brothers and sisters” by giving non-citizens city-wide voting rights.

“This is not about doing a favor to immigrants by allowing them to vote,” Rodriguez said. “If they pay their taxes, as I did when I had my green card, then they should have a right to elect their local leaders.” 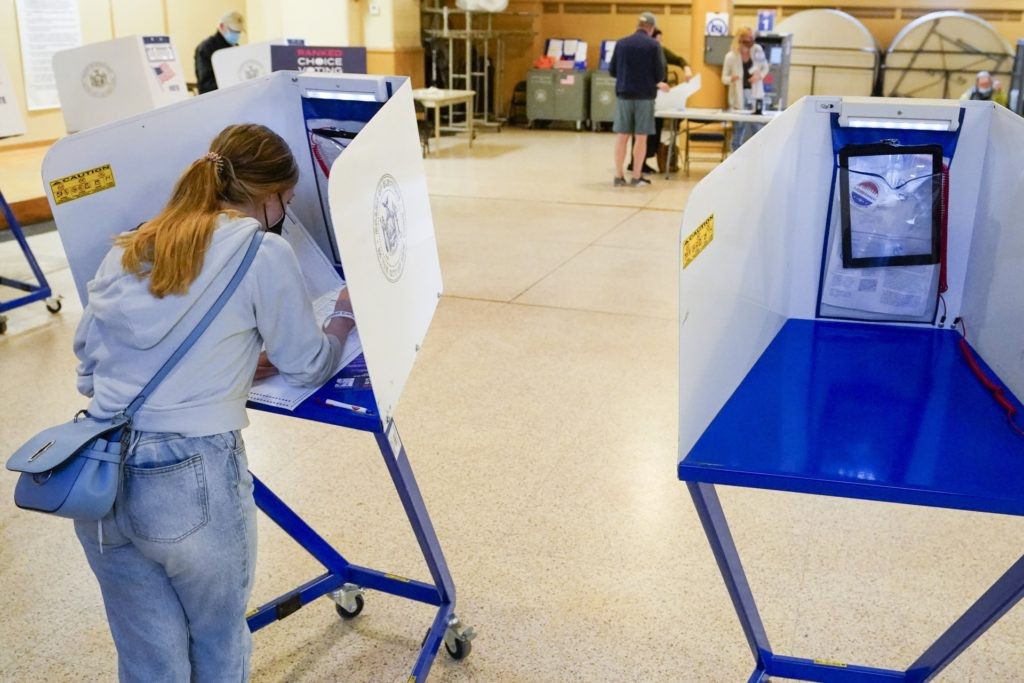 June Harkrider, who turned 18 in March, marks her ballot as she votes for the first time during early voting in the primary election, Monday, June 14, 2021, at the Church of St. Anthony of Padua in the Soho neighborhood of New York. (AP Photo/Mary Altaffer)

Councilman Robert Holden, a Democrat who represents the Maspeth neighborhood in Queens, is again opposing the plan, telling the New York Post that “giving non-citizens the right to vote would greatly diminish the value of citizenship, as well as the incentive for immigrants to make the commitment to this country and become citizens.”

“Citizenship and suffrage must not be torn from each other,” Holden said.

Councilman Joe Borelli, a Republican who represents Staten Island, said he believes “citizenship should matter and having someone reside here for 30 days and check some boxes shouldn’t entitle them to vote for the people who will tax us for the next generation.”

Democrats on the New York City Council attempted to pass the plan last year, seeking to give huge electoral power to the city’s 3.1 million foreign-born population — making up almost 40 percent of the total city population.

The majority of the city’s foreign-born population has arrived from the Dominican Republic, China, Mexico, Jamaica, Guyana, Ecuador, and Haiti, Trinidad and Tobago, Bangladesh, and India.