President Joe Biden canceled a scheduled trip to Chicago on Tuesday, according to reports, as he struggles to get his $5 trillion spending agenda through Congress.

The president met with moderate Sens. Joe Manchin (D-WV) and Kyrsten Sinema (D-AZ) at the White House on Tuesday, working with them to negotiate a price tag for his $3.5 trillion entitlement and climate spending bill.

“The president felt it was constructive, felt they moved the ball forward, felt there was an agreement that we’re at a pivotal moment,” White House press secretary Jen Psaki told reporters Tuesday afternoon, refusing to go into further detail.

Biden has repeatedly asked Manchin, who opposes the massive spending bill, to set a top-line price tag that he would consider, but Manchin has resisted.

“There were really good, honest straightforward negotiations,” Manchin said after returning from the White House. “There was no commitments made.”

NEW: Manchin returns from his meeting w/ Biden, tells us he made “no commitments” to the President on the reconciliation package.

“There was no commitments made at all,” he said when asked about a top-line number. “Just good negotiations, talking about the needs of our country.” pic.twitter.com/954u4exHIc

Sinema has made it clear to Biden she does not support his plan, according to reports, even though she has returned to the White House for a third meeting to discuss proposals with staff.

The White House needs support from both moderate Democrat senators to advance Biden’s partisan spending package requiring all 50 Democrat votes in the Senate.

But progressives are growing angry that Biden’s $3.5 trillion bill will not make it on the “two-track” legislative strategy that they were promised, threatening to kill the bipartisan infrastructure bill. 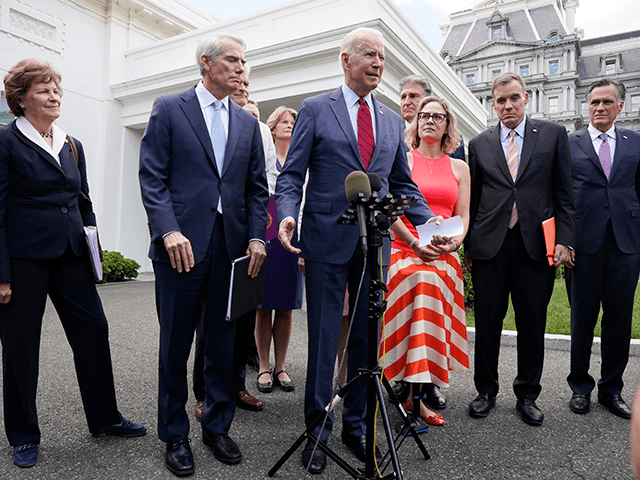 “Let’s be crystal clear,” Sen. Bernie Sanders (I-VT) said on social media, warning Democrat leaders not to move forward on the infrastructure bill without passing the $3.5 trillion bill. “If the bipartisan infrastructure bill is passed on its own on Thursday, this will be in violation of an agreement that was reached within the Democratic Caucus in Congress.”

Pelosi has scheduled a House vote for the infrastructure deal on Thursday, making the more left-wing of the party more skeptical of her commitment.

“I strongly urge my House colleagues to vote against the bipartisan infrastructure bill until Congress passes a strong reconciliation bill,” Sanders continued, warning them they would lose “leverage” for their more expensive agenda.

Let’s be crystal clear. If the bipartisan infrastructure bill is passed on its own on Thursday, this will be in violation of an agreement that was reached within the Democratic Caucus in Congress.

Biden remains behind the scenes as the negotiations continue, with no public events scheduled.

Psaki said the president and his staff would spend the week working with Congress to set negotiations.

“Let me just tell you that, one, we all ate our Wheaties this morning. I expect that’s going to be the breakfast all week,” she said Monday.