After the vote to approve the debt ceiling increase, Schumer was “confronted” by Sen. John Thune (R-SD) and Sen. Mitt Romney (R-UT) for a derogatory floor speech towards Republicans, Politico Playbook reported. Thune reportedly told Schumer his speech was “inappropriate and tone deaf.”

“Republicans played a risky and partisan game, and I am glad their brinkmanship didn’t work,” Schumer said in his remarks, blasting Republicans. “Today’s vote is proof positive that the debt limit can be addressed without going through the reconciliation process, just as Democrats have been saying for months.”

After Schumer’s remarks, the confrontation increased to a “shouting match.” Manchin reportedly sided with Republicans and reportedly approached Schumer afterward and told him his speech was “fucking stupid.” 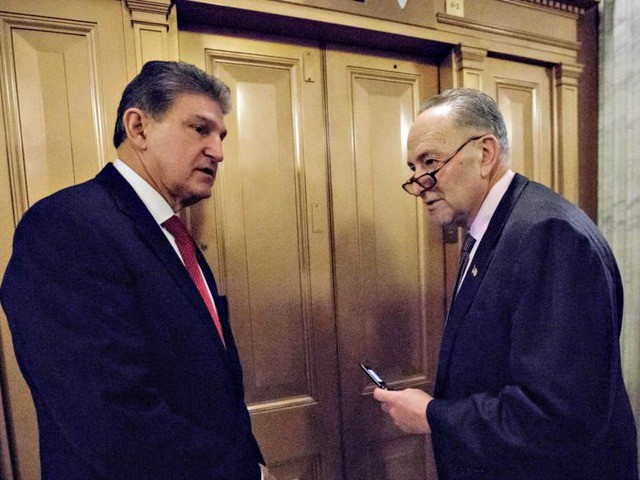 Media reports from the incident reveal a photo of Manchin putting “his head in his hands as he listened to Schumer’s tirade”:

Manchin’s reactions during Schumer’s speech, for what it’s worth (also, shoutout to @CSPAN). https://t.co/EzVzF909Fa pic.twitter.com/MiN40QaQhs

After the confrontation, Manchin reportedly said that “[Schumer] felt charged up and [they] had good conversation, ” adding, “We have to deweaponize, you can’t be playing politics.”

“I’m sure Chuck’s frustrated but that was not a way to take it out. We just disagree. I’d done it differently,” Manchin reportedly said. “Civility is gone.”

After Thune and Romney said their piece, Sen. Susan Collins (R-ME) reportedly “chased” Schumer into the cloakroom to “chew him out.”

Sen. Lindsey Graham (R-SC) told reporters the Republicans were upset because Sen. Mitch McConnell (R-KY) changed his mind at the last minute to raise the debt ceiling after whipping votes for weeks against it.

“Listen, they kicked our ass and we have no one to blame but ourselves,” Graham said.

Schumer, on the other hand, was described after the event as “not gracious,” a source told Playbook. “He’s not gracious, he’s from Brooklyn!” the source said.

The drama comes as the Senate voted to raise the debt ceiling by $480 billion after 11 establishment Republicans, including McConnell, voted for the debt ceiling increase. The debt ceiling will only be raised until December, when Democrats will again rely on McConnell’s good graces to increase the limit.

But it is unknown how that number will be a useful tool for Republicans.