ROME — President Joe Biden will almost certainly meet with Pope Francis when in Rome on October 30-31, the Vatican Nuncio to the United States has confirmed.

“It would be an anomaly if he did not meet the pope while in Rome,” Archbishop Christophe Pierre told Catholic News Service, especially since Biden is the first Catholic president since John Kennedy.

Archbishop Pierre is helping the Holy See prepare for Mr. Biden’s first visit to the Vatican as president, which includes navigating a “tense situation because of the agenda of the Democratic Party on abortion,” Pierre stated.

On Saturday, Pope Francis granted a private audience in the Vatican to Speaker of the House Nancy Pelosi (D-CA), who spearheaded the House passage of the most radical pro-abortion legislation ever introduced in Congress. 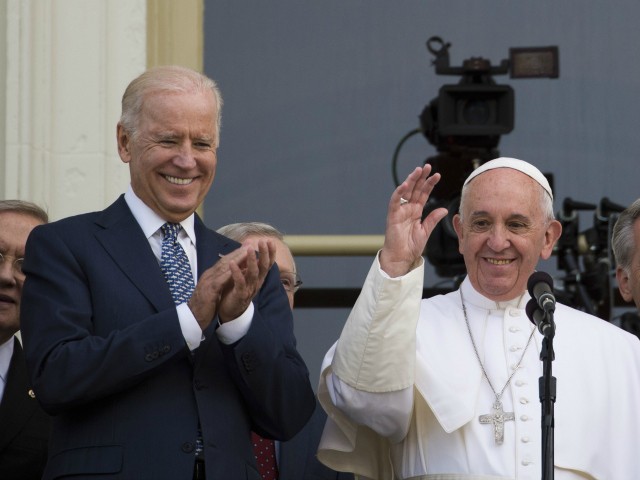 Pope Francis waves next to U.S. Vice President Joe Biden on a balcony after speaking at the U.S. Capitol building in Washington, DC on September 24, 2015. (Andrew Caballero-Reynolds/AFP via Getty)

Passing the Women’s Health Protection Act is a “very exciting day,” said Pelosi, a Catholic. “We’ve long been supporters of Roe v. Wade. We haven’t been able to codify it because we never had a Democratic pro‑choice Majority with a Democratic President, and now we do, and now we do.”

Pelosi described her meeting with Pope Francis as a “spiritual, personal and official honor,” while praising the pontiff for his “immense moral clarity.”

The pope’s leadership “is a source of joy and hope for Catholics and for all people, challenging each of us to be good stewards of God’s creation, to act on climate, to embrace the refugee, the immigrant and the poor, and to recognize the dignity and divinity in everyone,” Pelosi wrote in a press release on her website, while carefully sidestepping the abortion issue.

Archbishop Pierre said diplomacy is not easy and the pope has the whole Church to worry about.

“These are two human beings with huge responsibilities trying to meet each other. They are not wooden figures,” the archbishop said in reference to Biden and the pope. “And behind them is a big machine — and the world.”

The church plays a major role in American society and is “very much present in all issues,” he said. “You have 80 million Catholics, the huge structure of the church, and the bishops are very active.”

“When the Church is contaminated by polarization, we go nowhere,” Pierre said. The Church is called to be “salt of the earth” and “light of the world.”

President Biden reportedly will attend the G20 summit in Rome at month-end before traveling to Glasgow, Scotland, for the U.N.’s COP26 climate change conference.