Sinema’s congressional office did not comment on the senator’s travels, but New York Times’ sources told the publication Sinema had meetings in Paris and London. It is unknown if Sinema is traveling to additional countries, how long she might be abroad, how the trip was financed, or “whether she was doing any additional fund-raising for her own campaign.”

Meanwhile, Sen. Gary Peters (D-MI) was also in London on Wednesday to headline a fundraising dinner, which could have cost guests as much as $36,500, according to the Times. “Sinema’s name does not appear on that invitation.”

The reported fundraising efforts by the two Democrats come as the Senate is out of session. Democrat leadership indicated earlier in October the deadline to complete Biden’s $3.5 trillion reconciliation package is on Halloween, a little more than 15 days away.

Leftists are starting to look at Rep. Ruben Gallego (D-AZ) as a candidate to primary Sen. Kyrsten Sinema (D-AZ) in the future as they fume over the senator not being a rubber stamp for President Joe Biden’s agenda. https://t.co/owKuKdahXL

It seems unlikely Democrats will agree on the massive package by the deadline because Biden’s agenda has been stricken with Democrat infighting and therefore delayed multiple times.

The infighting centers around the far-left demanding an expansion of welfare handouts, which include free Pre-K, free college, free dental and vision for Medicare. But “moderates” like Sinema are not satisfied with the overall package. Sen. Joe Manchin (D-WV) has also stated his topline number for the package in $1.5 trillion, far short of the $3.5 trillion the far-left is demanding.

The spokesman for Sinema, John LaBombard, told the outlet the senator has spent time with Biden on the phone this week discussing her reservations over the massive tax and spend package.

“So far this week, Senator Sinema has held several calls — including with President Biden, the White House team, Senator Schumer’s team, and other Senate and House colleagues — to continue discussions on the proposed budget reconciliation package,” LaBombard explained. “Those conversations are ongoing.”

Despite the claims Sinema is still negotiating the package with Biden, which seems to hinge on the tax portion of the package, Sinema reportedly has not always returned the president’s phone calls. Such behavior has exasperated Biden. “The President told progressives this week that he has spent many hours with the two senators ‘and they don’t move,’” CNN reported. 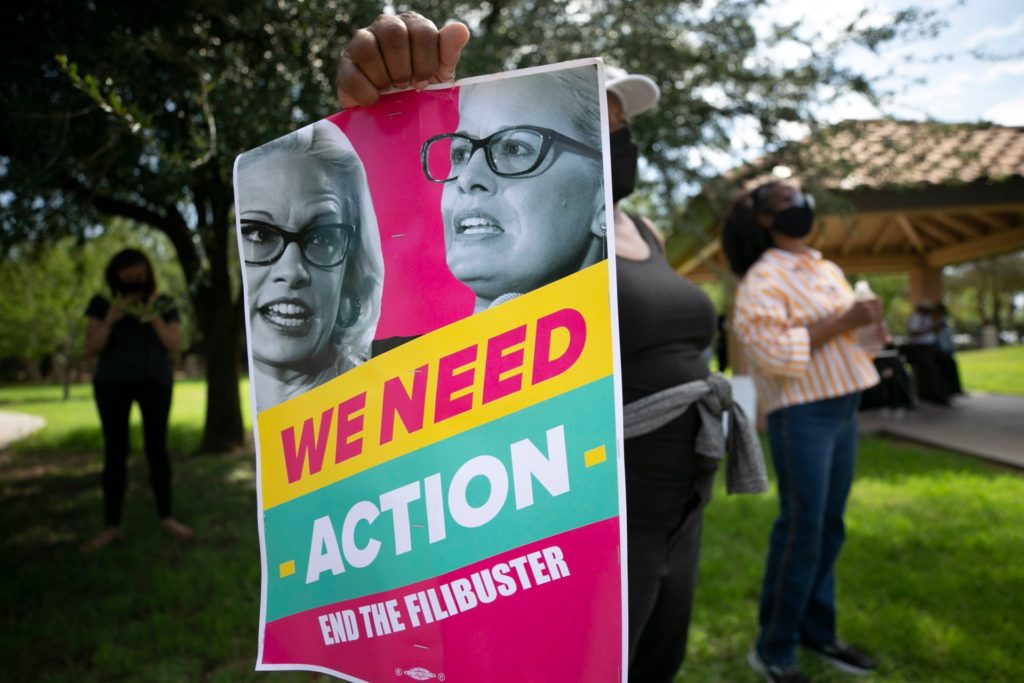 A rally is held at Kachina Park in Phoenix to demand Sen. Kyrsten Sinema, (D-Ariz.) end the filibuster on July 26, 2021. The rally, march and sit-in, in front of Sinema’s Phoenix office looked to end the filibuster, see the passage of voting and workers rights legislation and raising the federal minimum wage to $15 an hour. (David Wallace/The Republic via USA TODAY NETWORK)