President Donald Trump’s 2020 policies stopped the inflow of roughly 1.2 million foreign workers, according to a report by the business-funded Cato Institute.

However,  the rollback of government interference in the nation’s labor market has been good for American employees. It has forced U.S. executives to raise employees’ wages, treat their employees with more respect, and also invest in workplace technology to help the employees to get more work done per shift.

But Cato represents the interests of the investors and CEOs who gain from the federal government’s deliberate, wage-cutting inflation of the labor supply. So the Cato report emphasizes the employers’ loss of labor and ignores the offsetting gains for employees and productivity.

Trump slammed Joe Biden during the RNC for taking the donations of American workers while helping to offshore their jobs to China. https://t.co/fRNpC9fi46

The Cato estimate of 1.2 million absent foreign workers is far higher than an October 4 report by Goldman Sachs:

The reductions “would imply a tighter labor market than it did last cycle,” said the Goldman report, which added. “As a result, we expect wage growth will remain at about 3¾% in 2022.”

The biggest drop in labor has been caused by many Americans’ short-term exit from jobs, not by migration reforms, the Wall Street Journal reported on October 14:

More than a year and a half into the pandemic, the U.S. is still missing around 4.3 million workers. That’s how much bigger the labor force would be if the participation rate—the share of the population 16 or older either working or looking for work—returned to its February 2020 level of 63.3%. In September, it stood at 61.6%.

Many observers say the economy can gain from the reduced workforce — and the reduced government inflation of the nation’s labor market with migrant labor.

“The labor scarcity we’re experiencing is real … [and] is an opportunity, not a crisis,” David Autor, a professor at the Massachusetts Institute of Technology, wrote in a September 4 article for the New York Times. “When employers pay more for human labor, they have an incentive to use it more productively … And one way to use people more productively is to train them.”

“Many businesses are responding to higher wage costs by boosting the output of the workers they have, with productivity up 5% from the first quarter of 2020,” the Wall Street Journal wrote. 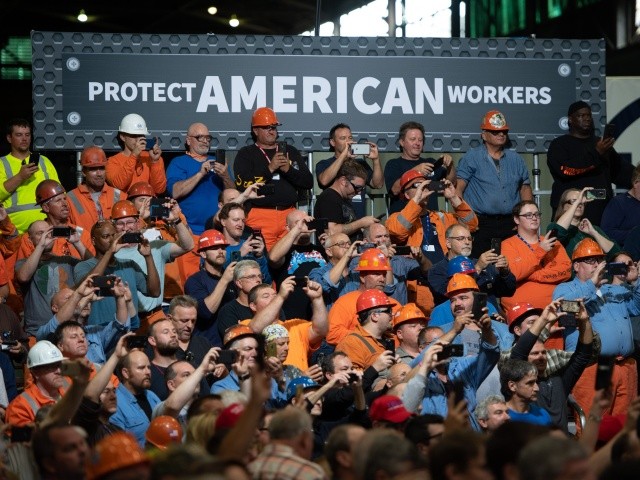 Employers are also being forced to treat their employers better. “We don’t like to say this much, but it has long been the practice of many restaurants to hire staff as inexpensively as possible and provide them with the fewest benefits that they can,” said Bret Thorn, the senior food & beverage editor for Nation’s Restaurant News. “We all know this,” he added:

I guess that can be a good business plan when the labor pool is deep, which it’s not now and I doubt will be for the foreseeable future, but it’s also cruel.

The federal government also allows employers to hire a population of at least eight million illegal migrants, and also to import short-term workers who arrive with tourist visas.

The huge inflow of foreign workers damages Americans’ wages — and their ability to buy homes — especially among the roughly 4 million young Americans who enter the workforce each year.

Nationwide, the federal policy of extracting legal and illegal migrants from poor countries is deeply unpopular because of its economic impact on ordinary Americans.

A wide variety of pollsters have shown deep and broad opposition to labor migration and the inflow of temporary contract workers into jobs sought by young U.S. graduates. This pocketbook opposition is multiracial, cross-sex, non-racist, class-based, bipartisan,  rational, persistent, and recognizes the solidarity that Americans owe to each other.

More than a third of those deaths were in Baltimore. Now, a mobile treatment van helps those suffering for free: pic.twitter.com/zY4enXusyM