The U.S. Supreme Court ruled unanimously Monday in favor of a California police officer who was accused of using “excessive force” during an arrest, reversing the liberal Ninth Circuit appeals court on an issue at the center of the “defund the police” movement.

Union City, California, police officer Daniel Rivas-Villegas responded to a 911 call from “a crying 12-year-old girl reporting that she, her mother, and her 15 year-old sister had shut themselves into a room at their home because her mother’s boyfriend, Cortesluna, was trying to hurt them and had a chainsaw,” The Court explains in a per curiam opinion.

“The girl told the operator that Cortesluna was ‘always drinking,’ had ‘anger issues,’ was ‘really mad,’ and was using the chainsaw to ‘break something in the house,'” The Supreme Court added.

After Rivas-Villegas arrived to the scene with four other officers, one officer asked whether the girl and her family were able to exit the house, to which dispatch said they “were unable to get out,” adding that the 911 operator had “hear[d] sawing in the background,” and thought that Cortesluna might be trying to saw down the door.

Rivas-Villegas and the other officers then proceeded to command Cortesluna come outside and “‘get down'” onto the ground, the Court said in its summary judgement.

Oscar-winning actor Morgan Freeman says he rejects the “defund the police” movement because police are necessary, and most officers are doing a good job. https://t.co/DizE2FO9PG

“Officers saw a knife in Cortesluna’s left pocket,” The Supreme Court explained. “While Rivas-Villegas and another officer were in the process of removing the knife and handcuffing Cortesluna, Rivas-Villegas briefly placed his knee on the left side of Cortesluna’s back.”

“Rivas-Villegas was in this position for no more than eight seconds before standing up while continuing to hold Cortesluna’s arms,” the Court said. “At that point, another officer, who had just removed the knife from Cortesluna’s pocket and tossed it away, came and handcuffed Cortesluna’s hands behind his back.”

The Court added that while the federal district court covering that part of California granted summary judgment to Rivas-Villegas, the U.S. Court of Appeals for the Ninth Circuit reversed. 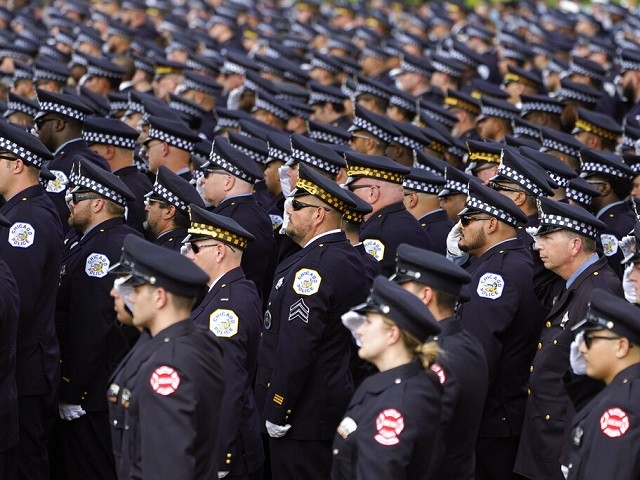 Chicago police and firefighters salute as the body of slain Chicago police officer Ella French is carried into the St. Rita of Cascia Shrine Chapel for a funeral service Thursday, Aug. 19, 2021, in Chicago. French was killed and her partner was seriously wounded during an Aug. 7 traffic stop on the city’s South Side. (AP Photo/Charles Rex Arbogast)

The San Francisco-based appellate court held that “Rivas-Villegas is not entitled to qualified immunity because existing precedent put him on notice that his conduct constituted excessive force,” the Supreme Court said, adding that in reaching this conclusion, the Ninth Circuit relied solely on LaLonde v. County of Riverside.

The Court goes on to note that the court of appeals acknowledged that “‘the officers here responded to a more volatile situation than did the officers in LaLonde.‘”

Nonetheless, the three-judge appeals panel reasoned that “‘both LaLonde and this case involve suspects who were lying face-down on the ground and were not resisting either physically or verbally, on whose back the defendant officer leaned with a knee, causing allegedly significant injury.'”

The Supreme Court, however, rejected that reasoning, siding with the dissent from the Ninth Circuit’s Judge Collins, who argued that “the facts of LaLonde are materially distinguishable from this case and are therefore insufficient to have made clear to every reasonable officer that the force Rivas-Villegas used here was excessive.” 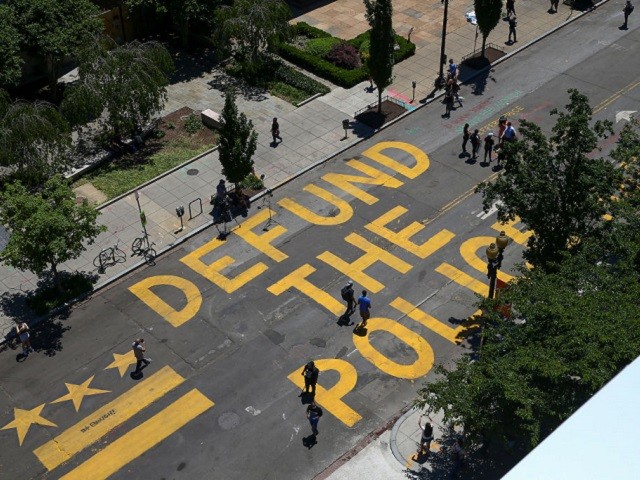 People walk down 16th street after “Defund The Police” was painted on the street near the White House on June 08, 2020 in Washington, DC. (Tasos Katopodis/Getty Images)

“We agree and therefore reverse,” the Supreme Court said, adding that “LaLonde did not give fair notice to Rivas-Villegas,” who is “thus entitled to qualified immunity.”

The Supreme Court then cited its decision in White v. Pauly, which ruled that “‘Qualified immunity attaches when an official’s conduct does not violate clearly established statutory or constitutional rights of which a reasonable person would have known.'”

“A right is clearly established when it is ‘sufficiently clear that every reasonable official would have understood that what he is doing violates that right,'” the Court reaffirmed.

Police use of force when making arrests has been in the news regularly since the riots last year sparked by the death of George Floyd, and congressional Democrats have advocated legislation that would govern what sort of tactics police can use in such situations, and whether lawmakers should strip police of qualified immunity.

The case is Daniel Rivas-Villegas v. Ramon Cortesluna, No. 20–1539 in the Supreme Court of the United States.