Reports the Biden administration is considering providing illegal border crossers, who were subjected to former President Donald Trump’s “zero tolerance” policy, some half a million dollars each in a reparations-style payout were blasted Friday by Rep. Greg Murphy (R-NC).

In an exclusive statement to Breitbart News,  he said “not one American taxpayer penny” should contribute to the “absurd, unconscionable initiative that would further implode our border security,” adding any such funds would be a “slap in the face” to Americans.

Noting various “self-inflicted crises” currently plaguing the U.S., the North Carolina Republican criticized the notion of a “prize fund for illegal immigrants” who knowingly broke the law, in his statement:

In the face of an overwhelming number of self-inflicted crises: 30-year high inflation, supply chain disruptions, the Afghanistan debacle, labor shortages, and of course the crisis at our Southern Border, it’s a slap in the face to the American people that this administration would even consider using taxpayer dollars to create a prize fund for illegal immigrants who have knowingly and purposely broken our laws.

He also slammed the amount of compensation proposed, claiming it was disproportionate to that paid to families of fallen service members and 9/11 victims.

He then warned the “absurd, unconscionable” move would be further damaging to the country’s eroding border security.

Biden’s administration is considering a plan that would give border crossers, who were subjected to former President Donald Trump’s “Zero Tolerance” policy, about $450,000 each in a reparations-style payout. https://t.co/4xYojvRqoh

“Not one American taxpayer penny should go towards this absurd, unconscionable initiative that would further implode our border security,” he added.

On Friday, Rep. Murphy announced he had led a letter — with over 40 other Republicans signed on — addressed to U.S. Department of Homeland Security (DHS) Secretary Alejandro Mayorkas, Department of Health and Human Services (HHS) Secretary Xavier Becerra, and Attorney General Merrick Garland, expressing “urgent concern” regarding a recent Wall Street Journal report detailing the Biden Administration’s potential decision to pay illegal immigrants who crossed the U.S. border in 2018 roughly $450,000 in compensation per person.

“I was incredulous when I read the report that the Biden Administration wants to send half a million dollar checks to illegal immigrants who broke our laws” he said, adding it was “a truly asinine, pro-crime idea that will incentivize illegal immigration and open the floodgates for a surge at the border.”

Demanding President Biden provide answers as to why those who “knowingly and unlawfully” entered the country illegally are prioritized over Americans, the letter blasts the alleged rationale for the “egregious abuse of taxpayer dollars” — compensation for “lasting psychological drama.” 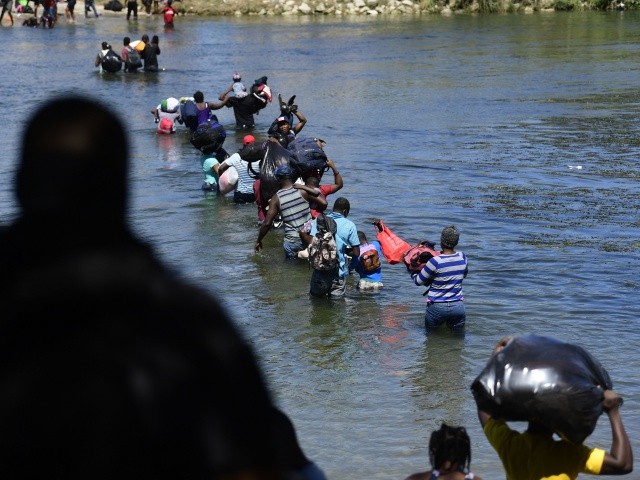 Calling the promise of exorbitant funds to those who unlawfully entered the country a “message to the world that our borders are open, and our rule of law will not be enforced,” the letter concludes by highlighting the “shameful” thought of prioritizing those who broke the country’s laws over those who gave their lives defending it.

“The idea that we would give illegal foreigners who broke the law a check that exceeds the amount that our government supplies to our valiant and heroic Gold Star Families is shameful, reprehensible, and morally indignant,” it states.

Last week, as Breitbart News reported, the Biden administration weighed whether to provide border crossers — who were subjected to the zero tolerance policy — with $450,000 each as part of a payout in lawsuits filed.

One million migrants have crossed the border since October, according to a June 29 report by CNN. https://t.co/E1N4UjOKeK

In some instances, a family unit could secure about $1 million from the payout and overall, payouts could cost American taxpayers over $1 billion.

Lawyers representing the border crossers have argued that each family unit should get $3.4 million in payouts.

Former President Donald Trump had instituted the zero tolerance policy at the United States-Mexico border in 2018 to reduce illegal immigration, a policy which had been utilized since at least before 2001.

As a result of the policy, adult border crossers were often put into separate holding facilities from children they arrived with at the southern border. Since then, border crossers who were subjected to the policy have sued the federal government.

On Thursday, Deputy Director of the ACLU’s Immigrants’ Rights Project Lee Gelernt, who is a lead negotiator on one of the lawsuits, criticized the “moral stain” left by the family separation policy, calling for compensation and a means for the illegal immigrants to remain in the country, according to the WSJ report.

“President Biden has agreed that the family separation policy is a historic moral stain on our nation that must be fully remedied,” he said.

“That remedy must include not only meaningful monetary compensation, but a pathway to remain in the country,” he added.