Imperiled and “mad” Democrats slammed President Joe Biden on Wednesday after the catastrophic election that left the Democrat Party disoriented over the defeats in Virginia, New York State, New Jersey, and Texas.

“Nobody elected him to be F.D.R., they elected him to be normal and stop the chaos,” said vulnerable Rep. Abigail Spanberger (D-VA), suggesting Biden’s radical agenda will have a “bruising” impact on the 2022 midterms, the New York Times reported.

Franklin D. Roosevelt, president in the 1930s and among the second wave of “progressivism,” created new federal agencies and enacted sweeping far-left legislation during the great depression. One of FDR’s principle achievements was the creation of the Social Security Administration, which is now insolvent.

“We were so willing to take seriously a global pandemic, but we’re not willing to say, ‘Yeah, inflation is a problem, and supply chain is a problem, and we don’t have enough workers in our work force,’” Spanberger said. “We gloss over that and only like to admit to problems in spaces we dominate.” 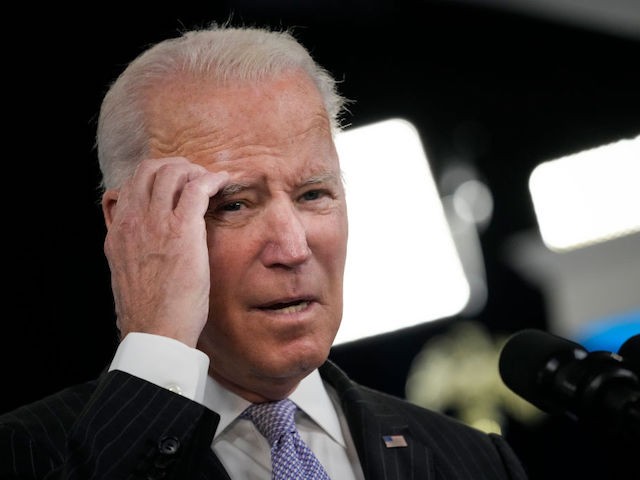 U.S. President Joe Biden speaks about the authorization of the Covid-19 vaccine for children ages 5-11, in the South Court Auditorium on the White House campus on November 03, 2021 in Washington, DC. (Photo by Drew Angerer/Getty Images)

Rep. Kathleen Rice (D-NY), another Democrat likely fearing the 2022 midterms, said the demand to enact radical legislation is not a reality in her district. Rice took the far left to task for threatening her reelection hopes.

“I don’t understand some of my more progressive colleagues saying last night now shows us that what we need to do is get both of these bills done and shove even more progressive stuff in,” Rice told the Times. “What we’re talking about is not resonating with voters.”

Loretta Weinberg (D), a Democrat state senator from New Jersey, where Gov. Phil Murphy (D) has nearly lost the governor’s mansion and where the top Democrat senator in the state’s legislature was defeated by a Republican with less than $200 dollars, told the Times Biden’s coronavirus lockdowns have hurt the party.

“We are a high-property-taxes, very densely populated, very diverse state, with all of the problems of people living close together during a time of a pandemic — tough decisions of closing schools and closing down the economy,” she said. “And it all came back to roost.”

Not every Democrat feels the same way as those who are facing a difficult reelection. Rep. Sean Patrick Maloney (D-NY), the chairman of the Democratic Congressional Campaign Committee, told the Times Republicans won Tuesday’s election in Virginia by being dishonest to voters.

“Glenn Youngkin got away with being all things to all people, and we can’t let them do that,” Maloney said. “The House Republicans have cast their lot with the toxic Trump agenda of lying about the election, of minimizing the pandemic, of ignoring the attack on the Capitol.”

Far-left state representative in Arizona, Raul Grijalva, told the Times the election was lost because Biden failed to pass his radical agenda in Congress. “We’re seeing the expectations of our base not being fulfilled and that’s suppressing the vote by itself,” he said.

“We’re mad at them, but we can’t say anything because it might make them weirder,” he said.