Leftist internet trolls have been crying racism in response to Kyle Rittenhouse trial Judge Bruce Schroeder’s reference to “Asian food” on Thursday as the court went into recess.

The alleged “faux pas” happened as Judge Schroeder dismissed the court for lunch on Thursday afternoon, during which he mocked President Joe Biden’s supply chain crisis at Asian food’s expense.

“Let’s hope for one o’clock, I don’t know, the uh, hope the Asian food isn’t coming — it isn’t on one of those boats in Long Beach Harbor,” he said. 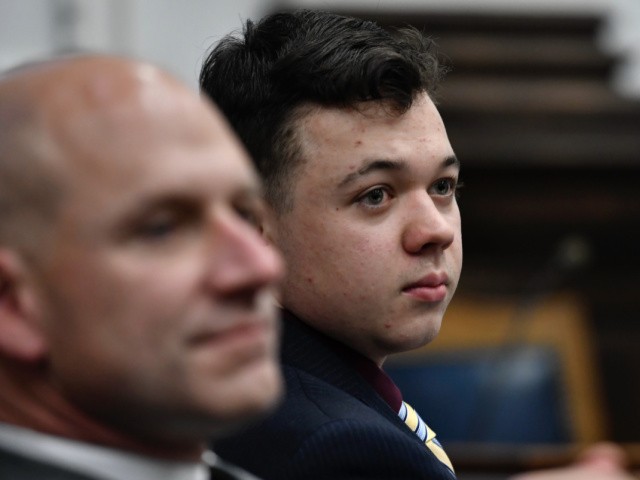 Kyle Rittenhouse, right, and his attorney Corey Chirafisi listen during the trial at the Kenosha County Courthouse on November 11, 2021, in Kenosha, Wisconsin. (Photo by Sean Krajacic-Pool/Getty Images)

The outrage came swift, nearly 24 hours after the internet lost its collective mind over the judge’s ringtone, which may or may not have been Lee Greenwood’s “God Bless the USA” or “Southern Cross” by ultra-left-wing Crosby, Stills, and Nash.

John Yang, president and executive director of Asian Americans Advancing Justice-AAJC, told the far-left outlet that the judge’s joke will put the Asian community “in the crosshairs of micro aggressions as well as actual physical violence,” stressing that the comments indicate the judge’s lack of “cultural sensitivity.”

“Any Asian American that sees or hears his statement will understand that he is making fun of or mocking our community,” Yang said. “This is a great illustration of how Asian Americans are not immune from racial bias and discrimination in our criminal justice system.”

The echo chamber of the Twitterverse did little to quell the torrent of hot takes decrying the judge as an apologetic racist.

2) And yes it is RACIST. The boats in the harbor are majority boats from Asia. And he said Asian food – which further connects the Asian boats. It’s racist c’mon.

4) folks — JUST BECAUSE YOU DIDN’T KNOW/THINK A TERM IS RACIST doesn’t mean it’s not racist. Example — the slur “moon face” is one of the most racist things against Asian people. Most haven’t heard of it. But it’s damn racist. Trump used it against @gtconway3d last year. https://t.co/G1aq3kK2lV

6) The same judge blocks the prosecution from calling Rittenhouse’s murdered gunshot victims as “victims”, but calling them arsonists looters and rioters is okay. https://t.co/6YUunzsq3B

it's pretty clear that this man should not be a judge of anything. https://t.co/9OcjNN4w4r

#RittenhouseTrial Judge Bruce Schroeder breaks for lunch referencing the food that was ordered saying, “I hope the Asian food isn’t coming.. isn’t on one of those boats from Long Beach Harbor.” pic.twitter.com/UakvcxbSO1

BREAKING: The judge in the Kyle Rittenhouse murder case jokes in court that he hopes the "Asian food" that they ordered isn’t "on one of those boats in Long Beach harbor" as if all Asian food is imported from overseas. RT IF YOU THINK HE'S A RACIST DISGRACE!

"I hope the Asian food is coming and it's not on one of the boats in Long Beach harbor," says Judge Schroeder, incomprehensibly.

“Let’s hope for 1 o’clock. I dunno..I hope the Asian food isn’t coming; it isn’t on one of those boats in Long Beach Harbor.”
-Judge Shroeder today before going into recess.

Would he have said that if they were having sandwiches catered?

Judge: “I hope the Asian food isn’t held up on one of those boats in Long Beach harbor.”

Yep, he said that. No jury in the room, just the lawyers but STILL WTF