Dr. Anthony Fauci said he is “not so sure” if vaccines should be required for travelers on domestic flights, making the remark during Wednesday’s press conference in the White House briefing room, where he also admitted the definition of fully vaccinated “could change” down the road to include those who received a booster shot.

During the presser, Fauci detailed the first case of the omicron variant in the U.S., popping up in California in an individual who recently traveled from South Africa and is fully vaccinated. During the Q&A portion of the press conference, a reporter asked Fauci if he supports a vaccine requirement for domestic flights.

“The President was asked about this earlier this week and said that that had not yet been recommended to him. You’re his chief medical advisor.  Do you think that’s something the country should adopt?” the reporter asked.
“You know, I’m not so sure we should say that that would be a requirement,” he said, seemingly dismissing the prospect, yet not entirely.

“That’s where we want to go, as opposed to a requirement,” Fauci added. 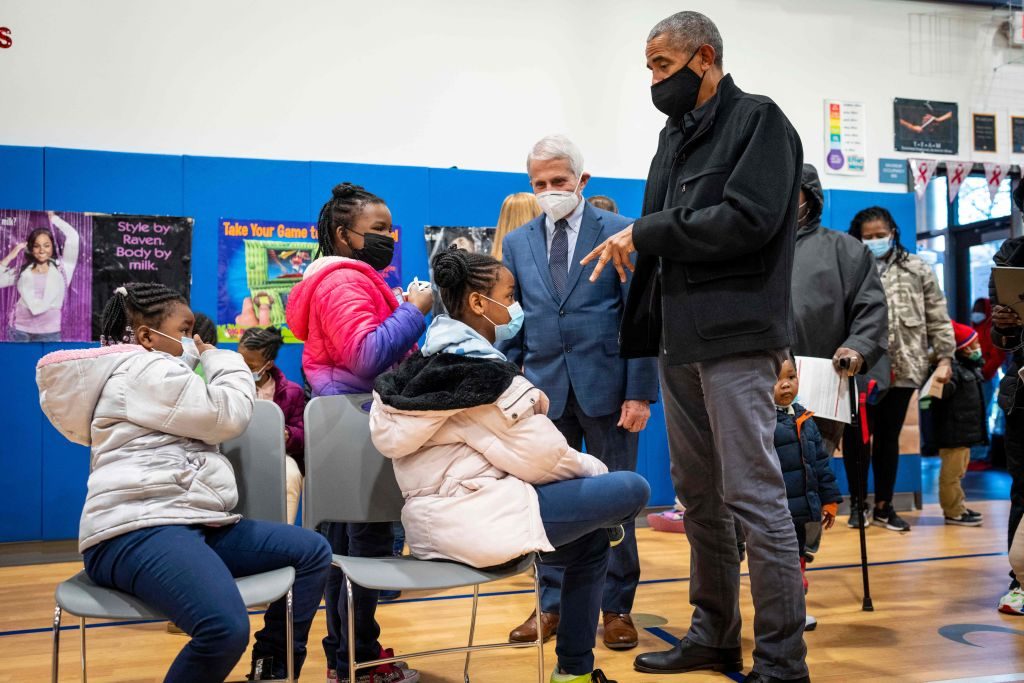 Former President Barrack Obama and Chief Medical Advisor to the president Anthony Fauci, talk with elementary school students as they prepare to receive their second vaccine shot at the Kimball Elementary School in Washington, DC, November 30, 2021. (DOUG MILLS/POOL/AFP via Getty)

However, Americans are keenly aware that the administration is willing to reverse course and mandate vaccines, as it is currently attempting to do through the Occupational Safety and Health Administration (OSHA). Notably, over a year ago, Fauci said, “I don’t think you’ll ever see a mandating of vaccine, particularly for the general public.”

“If someone refuses the vaccine in the general public, then there’s nothing you can do about that,” he said at the Healthline town hall in August 2020. “You cannot force someone to take a vaccine.”

Later on, a reporter asked Fauci if there should be a “at a minimum, be a testing requirement for domestic air travel.”

Dr. Anthony Fauci is a “sociopath” and “narcissist” who deserves to be in jail based on his “lie of omission” in January 2020 alone, Peter Navarro told Breitbart News Saturday. https://t.co/dc6mpS9wcc

“Well, again, that’s some- — these kinds of things we always talk about and consider.  But, right now, I’m not so sure we need a testing for an air travel in this country,” Fauci said, once again seemingly dismissing the prospect, yet leaving the door open for change.

“I always get back to the fact — is that people should wind up getting vaccinated and boosted if they’re eligible for a boost.  I keep coming back to that because that’s really the solution to this problem,” he added.

During that same press conference, Fauci admitted that the definition of “fully vaccinated” could change down the road, applying only to those who also got booster shots.