The Chinese Foreign Ministry published a “report” Sunday announcing the death of American democracy at the hands of wealth, racism, and “too many checks and balances.”

China, one of the world’s most repressive regimes and its most prodigious human rights abuser, has been using its government media arms for the past month to complain that President Joe Biden did not invite the country to its upcoming “Summit for Democracy,” a digital event in which the State Department claims world leaders will discuss “an affirmative agenda for democratic renewal and to tackle the greatest threats faced by democracies today through collective action.”

Instead of inviting China, which the Biden administration has formally accused of genocide over the ongoing genocide of the Uyghur people, the State Department invited representatives from the sovereign nation of Taiwan. The U.S. does not formally recognize Taiwan as a country because the Chinese Communist Party falsely insists it is a rogue “province” under Beijing’s control.

While complaining about Taiwan’s participation, communist regime outlets such as the Global Times have expressed more outrage that the U.S. excluded China, and fellow autocracy Russia, from its list of democratic invitees.

The Foreign Ministry published “The State of Democracy in the United States,” a 30-page tirade about freedom in America, in part to discourage the rest of the world from admiring the American political system. While the paper lists Beijing’s usual gripes about the United States – alleged rampant racism, wealth inequality, and the promotion of free societies abroad – it added a new complaint to the list: checks and balances.

The “checks and balances” system distributes power at the highest levels of American government in a way that, in theory, makes it impossible for one person or institution to control the country. The judicial, legislative, and executive branches can all “check” each other when one of the branches attempts to abuse its power.

In China, the Communist Party is the only institution with power. The Politburo and its dictatorial leader, Xi Jinping, hoard unlimited power used to abuse, disappear, or otherwise subdue any dissenting voice.

“The U.S. political system has far too many checks and balances, raising the cost of collective action and in some cases making it impossible altogether,” the Chinese Foreign Ministry report read. The propaganda report cites failed theorist Francis Fukuyama as the alleged originator of this complaint.

“American political scientist Francis Fukuyama points out in his book Political Order and Political Decay that there is an entrenched political paralysis in the US. Fukuyama calls the system a ‘vetocracy,'” the report continued. “Since the 1980s, the ‘vetocracy’ of the US has become a formula for gridlock.”

The report then went on to misuse the term “veto” – a power the president can use to block legislation – claiming that the American federal government has many “individual veto players” who can single-handedly prevent the entire government from functioning: 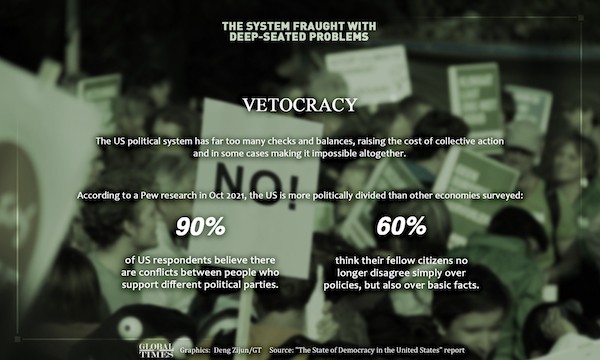 “The function of ‘checks and balances,’ which was purportedly designed to prevent abuse of power, has been distorted in American political practice,” the report claimed. “Vetoing makes one identify more strongly with their peers in the same camp, who may in turn give them greater and quicker support. Consequently the two parties are caught in a vicious circle, addicted to vetoing.”

The report does not explain who it is accusing of constantly vetoing policy, nor does it at any moment explain that only the president has veto power. Presidents exercise this power rarely. In the past 30 years, President Donald Trump used his regular veto power ten times, Barack Obama and George W. Bush both issued 12 vetoes, and Bill Clinton issued a significantly higher number at 36.

Elsewhere, the Chinese Foreign Ministry report repeatedly uses the case of George Floyd, a Minnesota man who died in police custody in 2020, as proof of eroding democratic governance, even as it admits that the incident prompted protests without government intervention in “about 100 cities across the 50 states of America.” It also cites the events of January 6, 2021, also the product of a public assembly that would have ended with severe police repression in China, as proof that America is not a democracy. 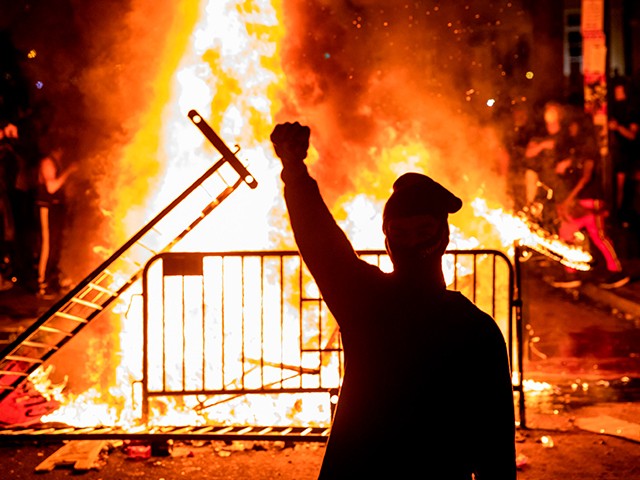 More minor evidence of alleged democratic erosion listed include the entirety of the U.S. media, elections, the use of money to support politicians, the coronavirus pandemic that China caused, and U.S. social media sites such as Twitter and Facebook, which the Chinese regime bans citizens from accessing.

“Whether a country is democratic should be judged and determined by its own people, not by a minority of self-righteous outsiders,” the report concluded.

The Global Times, a Chinese government propaganda outlet, praised the report for helping “crush the ‘halo’ of the so-called ‘a beacon for democracy'” [sic] on Sunday.

“China’s recent actions also help the international community to clear the clouds and show what true democracy is. As the beacon of US democracy is dimming, the democratic practices in China are dazzling with brilliance,” the Global Times claimed, citing “experts.”