Republicans are “pro-death” as well as “anti-science and anti-rational thought,” according to a recent Vanity Fair piece that blasts them for being “all in on eradicating Biden’s vaccine mandates for businesses,” while charging they will persist “until every American has the right to get COVID-19.”

A Vanity Fair essay published on Wednesday, penned by politics correspondent Bess Levin and titled “Behold, the Many Ways Pro-Death Republicans Are Going After Biden’s Vaccine Mandates,” began by accusing Republicans of opposing both science and rational thinking.

“Something you’ve probably picked up on over the last nearly 21 months is that Republicans are both anti-science and anti-rational thought,” Levin wrote.

“They won’t stop until every American has the right to get COVID-19.”

“That’s why, since the beginning of the pandemic, they’ve fought every single public health measure known to stop the spread of COVID-19,” she added, “from social distancing to mask wearing to getting vaccinated.”

According to Levin, unlike “reasonable people who don’t get their medical advice from Fox News,” conservatives devote “every waking hour to both fighting Joe Biden’s attempts to end this thing once and for all and blaming him for it not being over already.”

The essay also claims that Republicans, who are “are all in on eradicating Biden’s vaccine mandates for businesses,” “won’t stop until every American has the right to get COVID-19.”

Last week, in an essay titled “Republican Idiot Brigade Debuts Dumbest COVID Claims Yet,” Levin accused Republicans of having “a lot of extremely stupid things to say about COVID-19.”

“Unfortunately, since the pandemic has lasted longer than anyone could have imagined, conservatives have had to up their game re: the absurd things coming out of their mouths, from just stupid to historically moronic,” she wrote, adding it is “a challenge they have been more than willing to take up, rolling out an official idiot brigade of commentary that belongs in a study of people who’ve suffered traumatic head injuries.”

Levin then blasted “conspiracy theorist” Rep. Marjorie Taylor Greene (R-GA) for contrasting the lack of obsession over outnumbering cancer-related deaths with those of COVID-19, as well as Rep. Matt Gaetz (R-FL) for “suggest[ing] that people would be better off contracting the virus,” and Sen. Ron Johnson (R-WI) for claiming that White House chief medical adviser Dr. Anthony Fauci has “overhyped” the pandemic. 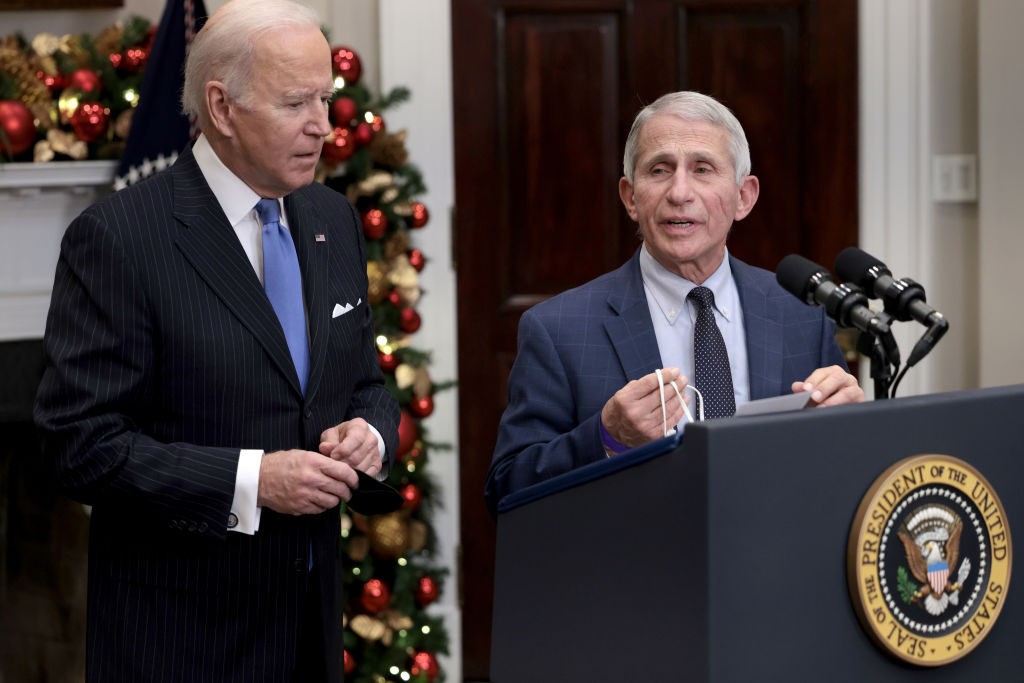 Anthony Fauci, Director of the National Institute of Allergy and Infectious Diseases and Chief Medical Advisor to the President, speaks alongside U.S. President Joe Biden as he delivers remarks on the Omicron COVID-19 variant following a meeting of the COVID-19 response team at the White House on November 29, 2021, in Washington, DC. (Photo by Anna Moneymaker/Getty Images)

“Why do these people refuse to get vaccinated?” she asked in reference to Republicans who choose not to.

“Because the Trumps (and Greenes, and Johnsons, and Gaetzes) of the world are lying to them, of course,” she wrote.

“I think, actually, the mandate has made it worse in terms of hardening people who don’t want to be told what to do by the government,” said Sen. John Barrasso (R-WY).

“If you look at my state, 40% of my state’s workforce stands to lose their job under this mandate,” said Sen. Shelley Moore Capito (R-WV). “It will be a killer to our economy.”

However, Democrats have often likened those opposed to undergoing vaccination to ignorant individuals who oppose science.

“Some of the anti-vaxxers here in this chamber remind me of what happened 400 years ago when people were clinging to the fact that the sun revolved around the Earth,” he said. “They just didn’t believe science.”

Last week, the Senate approved a resolution nullifying the Biden administration’s requirement that businesses with over 100 workers have their employees be vaccinated against COVID-19 or submit to weekly testing and wear masks at work, after Democratic Sens. Joe Manchin (WV) and Jon Tester (MT) joined 50 Republicans to vote against it.