China is well-known as one of the most oppressive and genocidal nations in modern times, but despite its long history of mass murder, oppression, corruption, and enslavement of minority groups, a tidy list of multi-national corporations have rushed to China’s side to sponsor the 2022 Olympics in Beijing.

Corporations including woke Coca-Cola, Airbnb, Bridgestone, and Visa are proudly listed as some of China’s collaborators for the coming international games, even as China continues to enslave its minority Uyghur population in forced labor camps.

There is little disagreement on the international stage among left and right regarding China’s outrageous human rights record.

The world’s premier watchdog organization, Human Rights Watch (HRW), says China is still one of the worst abusers of human rights in the world. In its 2018 report, the group reported that China has “dramatically stepped up repression and systematic abuses against the 13 million Turkic Muslims, including Uyghurs and ethnic Kazakhs, in China’s northwestern Xinjiang region. 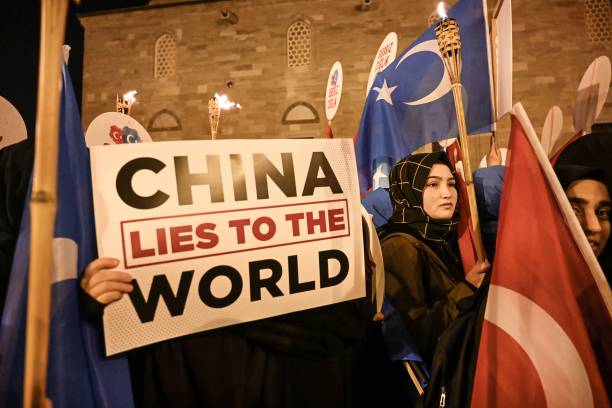 Supporters of China’s Muslim Uighur minority wave flag of East Turkestan and hold placards on December 20, 2019, during a demonstration at Fatih in Istanbul. (Photo by Ozan KOSE / AFP) (Photo by OZAN KOSE/AFP via Getty Images)

“Authorities have carried out mass arbitrary detention, torture, and mistreatment of some of them in various detention facilities, and increasingly imposed pervasive controls on daily life,” HRW wrote. “New regulations in Tibet now criminalize even traditional forms of social action, including community mediation by religious figures. In Hong Kong, a region promised ‘a high degree of autonomy” under the Sino-British Joint Declaration, the Chinese and Hong Kong governments hastened their efforts in 2018 to undermine people’s rights to free speech and political participation.”

The organization also cited China’s oppression of its homosexuals, refugees, asylum seekers, women, and girls, not to mention its actions against Tibet.

Despite the international consensus on China’s evils, a group of top corporations is still falling in line to support the “genocide” Olympics:

Airbnb: The Internet-based lodging rental company not only sponsors the “genocide” Olympics, but it may also even be profiting from the oppression and enslavement of the Uyghurs. According to a recent review, Airbnb sponsors rental properties in towns in China’s Xinjiang region where Chinese officials who manage the forced labor camps live. On the other hand, Airbnb is an opponent of American immigration laws and a proponent of open borders. In 2018, for instance, the company launched a campaign attacking Donald Trump for tightening immigration rules and attempting to secure the southern U.S. border.

Allianz: The Germany-based multinational financial firm has been one of the few corporations to defend its participation in the China Olympics. Recently the company hid behind the ideals of the Olympics but refused to actually address its support for China’s genocidal actions. In Nov. the company said, “We stand behind the Olympic Movement, and our longstanding support for its ideals will not waver.”

Atos: The French Information Technology company is a stout Olympics supporter and has helped China build its digital IT infrastructure for the Olympics and beyond. Of course, China is well-known for using its technology to spy on, track, and hunt down its citizens to punish them with beatings and imprisonment for not toeing the Communist Party’s iron-fisted rule. 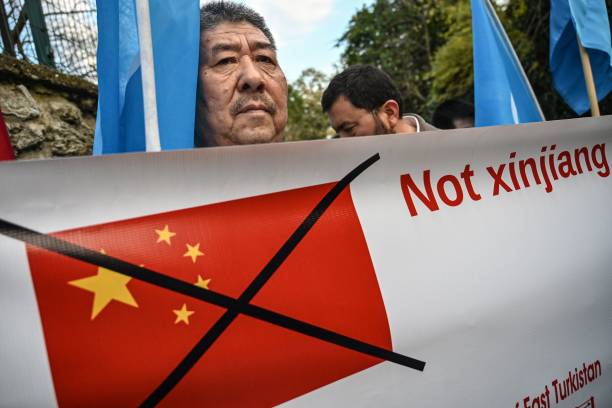 A Muslim Uighur holds a banner as he waves a flag of East Turkestan on December 13, 2019 during a demonstration in front of China Consulate in Istanbul. (Photo by Ozan KOSE / AFP) (Photo by OZAN KOSE/AFP via Getty Images)

Bridgestone: The Japanese tire manufacturer — which also owns the Firestone brand — has been sponsoring the Olympics since 2014 but has made only a few proclamations about its participation in China’s Winter Games. The company issued dozens of press releases mentioning its support for the Tokyo Games, but its mentions of China’s have been sparse. Still, in one note in June, Bridgestone praised China as a “sporting powerhouse” and noted how excited it was to use its Olympics sponsorship to “connect with Chinese consumers.”

Coca-Cola: During the Black Lives Matter era, Coke became one of the most woke American corporations of them all, with proclamations attacking America over social justice, its campaigns calling its white employees and customers racists, and its CEOs bloviation that Georgians are racists for voting for Republicans. On the other hand, Coke does not seem as willing to criticize China for its oppressive regime and has not said a word to explain why it is sponsoring the China games in the face of the country’s horrid record on human rights.
Intel: Silicon Valley giant Intel might fit right in with China’s campaign to put an end to free speech. The computing giant recently announced an artificial intelligence-based program that could be used to delete “racist” and “offensive” speech online. The company’s list of “offensive” speech is a left-winger’s wet dream as it squelches any criticism of the radical LGBTQ agenda, and attacks what it calls “white nationalism.”

Omega: Swiss watchmaker Omega has been the “official timekeeper” for the games for several years. Recently, though, the company chose to ignore American efforts to organize a boycott of the “genocide” games. After calls were made for Omega to address China’s human rights abuses, all the company would say was, “Our role at this event is Official Timekeeper, a vital position we have proudly fulfilled at the Olympic Games since 1932. We will therefore be there once again to serve the world’s best athletes as they compete on the global stage.”

Panasonic: The Japanese electronics manufacturer has been among the many Olympics sponsors that have neglected to say anything about China’s massive record of human rights abuses and have stonewalled calls by activist groups for comment.

P&G: The American personal health product manufacturer has also been unusually quiet in the face of calls for the company to defend itself for supporting the “genocide” games.

Samsung: South Korean electronics maker Samsung recently hailed China as a leader in healthcare, praising the country for its efforts to address the needs of the disabled. Samsung went on to exclaim that it hopes to become “a corporation that contributes to the Chinese society and is loved by people of China.” It, too, though, has rebuffed calls to comment on China’s actual record of human rights abuses.

Toyota: The Japanese carmaker that only six months ago was quick to chastise its own country by pulling its TV ads during the Tokyo Olympics has studiously remained quiet about the genuine human rights abuses in China. Toyota is not averse to making political statements, though. For example, this year, the carmaker proudly announced that it would no longer donate money to specific Republican candidates because of their racist objections to the 2020 election results.

Visa: The credit card giant has no qualms about shutting down the financial lives of Americans with its efforts to disenfranchise conservatives by canceling their credit services, but Visa is not so interested in standing up against China’s Uyghur genocide. The financial services company has joined most of the other China Olympics sponsors in a refusal to make any statements about China’s human rights abuses.

The pressure remains on these companies to speak up and explain themselves. In July, a bipartisan congressional panel criticized Coca-Cola, Visa, Intel, Airbnb, and Procter & Gamble for sponsoring the 2022 Beijing Olympics despite China’s human rights violations. 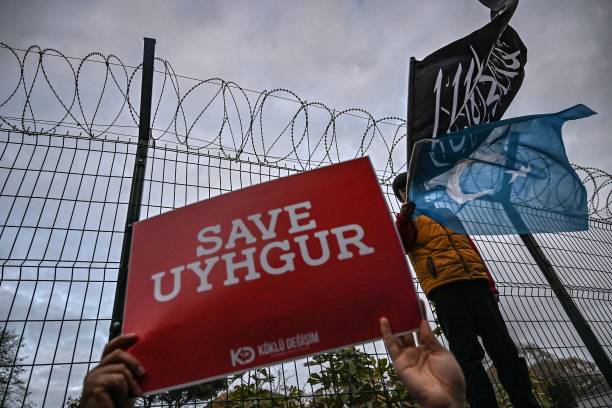 A supporter of China’s Muslim Uighur minority holds a placard reading “Save Uighur” as a boy waves the flag of East Turkestan and an Islamic black flag on December 13, 2019, during a demonstration in front of China Consulate in Istanbul. (Photo by Ozan KOSE / AFP) (Photo by OZAN KOSE/AFP via Getty Images)

“The time for quiet diplomacy is over,” Human Rights Watch spokesperson Minky Worden said during a briefing last month. “It’s time for the TOP sponsors to urge the International Olympic Committee to adopt human rights. It’s time for them to disclose their supply chains in China, particularly any products that have the five rings of the Olympics.”

Clearly, these companies don’t care about human rights when there is money to be made in China.