Up to one million noncitizens living in New York City will have access to the ballot box after Mayor Eric Adams (D) on Sunday approved legislation by the city council to automatically become law.

“I believe that New Yorkers should have a say in their government, which is why I have and will continue to support this important legislation,” Adams said in a statement Saturday, as seen by the New York Post.

“While I initially had some concerns about one aspect of the bill, I had a productive dialogue with my colleagues in government that put those concerns at ease. I believe allowing the legislation to be enacted is by far the best choice, and look forward to bringing millions more into the democratic process,” the Democrat continued.

The law promises to be be a boon for the city’s massive 3.1 million-strong foreign-born population, which makes up almost 40 percent of its resident population, while at the same time diluting the municipal votes of millions of American citizens who live in the city.

Beneficiaries could vote in municipal elections as early as next year unless a judge halts its implementation. New York City is now the most populous city in the United States to grant voting rights to non-citizens.

More than a dozen communities across the U.S. already allow noncitizens to cast ballots in local elections, including 11 towns in Maryland and two in Vermont.

The Board of Elections will next draw up an implementation plan by July, including voter registration rules and provisions that would create separate ballots for municipal races to prevent noncitizens from casting ballots in federal and state contests. 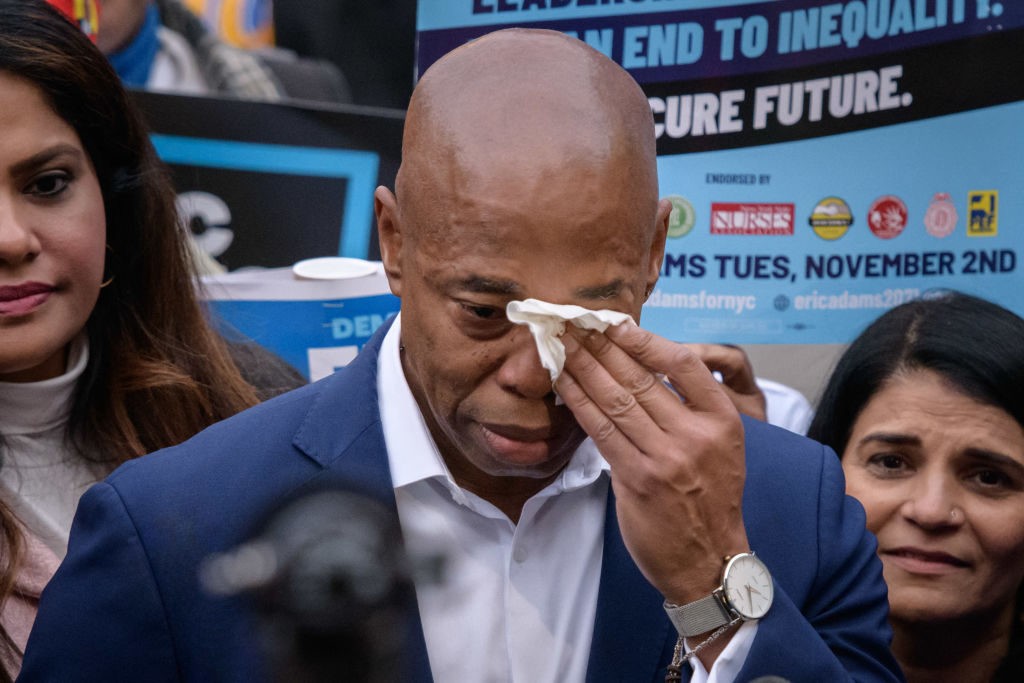 New York democratic mayoral candidate Eric Adams (C) wipes his eyes as he speaks to the media and supporters upon leaving a voting center after casting his ballot, in Brooklyn, New York on November 2, 2021. (ED JONES/AFP via Getty Images)

The measure enables noncitizens who have been lawful permanent residents of the city for at least 30 days, as well as those authorized to work in the U.S., including so-called “Dreamers,” to help select the city’s mayor, city council members, borough presidents, comptroller and public advocate.

Opponents say the council lacks the authority on its own to grant voting rights to noncitizens and should have first sought action by state lawmakers.

The New York State Republican Party previously issued a statement indicating it will file a lawsuit to get the plan thrown out, arguing the state’s constitution is explicitly clear that voting is a right guaranteed exclusively to American citizens.

"We will fight, using every legal means necessary, to prevent this legislation from becoming law. Stay tuned for further announcements about our legal action." pic.twitter.com/N2wChAayce

As Breitbart News noted, the move has the potential to massively influence local elections while diluting the votes of American citizens in the city.

Some states including Alabama, Arizona, Colorado and Florida have adopted rules that would preempt any attempts to pass laws like the one in New York City.