President Joe Biden and Gov. Gretchen Whitmer (D) are underwater with likely Michigan voters months ahead of the 2022 election, where the governor is running for reelection and the president’s failed agenda items in Washington will be put to the test with voters.

The poll, first reported by ABC12 News, showed that only 32 percent of likely Michigan voters have a positive view of Biden’s job as president. In comparison, an overwhelming majority (66 percent) gave the president a negative review of his job performance. Included in those numbers are 44 percent who said Biden is doing a “poor job” and 22 percent who said the president is “just fair.”

Biden, who has now been in office for over a year, has been plagued with bad poll numbers for months after dealing with the consequences of poor decision-making, such as a supply chain crisis, record-high inflation, and the botched Afghanistan withdrawal.

The respondents also gave a poor review to Whitmer, who is up for reelection. Only 45 percent of the respondents said they have a positive view of Whitmer, while a majority (52 percent) viewed the governor negatively. Three percent said they were undecided or refused to answer. 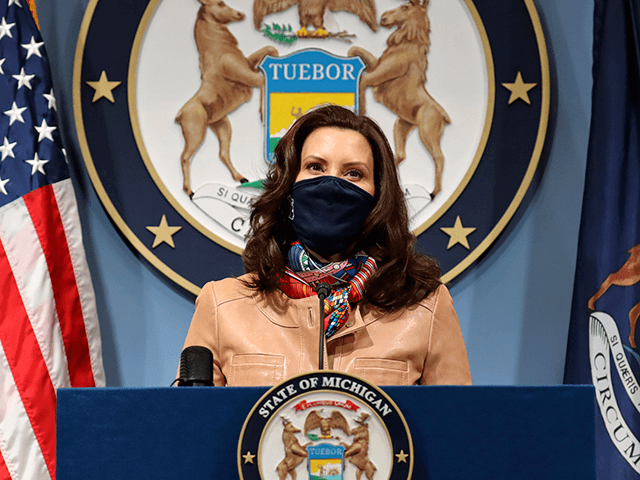 Gov. Gretchen Whitmer addresses the state during a speech in Lansing, Mich. (Michigan Office of the Governor via AP)

In a hypothetical 2022 head-to-head matchup between Whitmer and the Republican gubernatorial front-runner, former Detroit Police Chief James Craig, the governor led by five points, 46 percent to 41 percent. However, 55 percent of respondents said they did not recognize the former police chief’s name.

The statewide poll for ABC12 News was conducted by EPIC-MRA and asked 600 likely Michigan voters. The poll was carried out “last week” according to the news organization and showed a four percent margin of error.