While Republicans and Democrats in Congress have helped President Joe Biden fund his massive Afghan resettlement operation to the sum of $13 billion, Baker is subsidizing the cost even more by throwing millions at non-governmental organizations (NGOs) who will resettle about 2,000 Afghans across the state by the end of March. 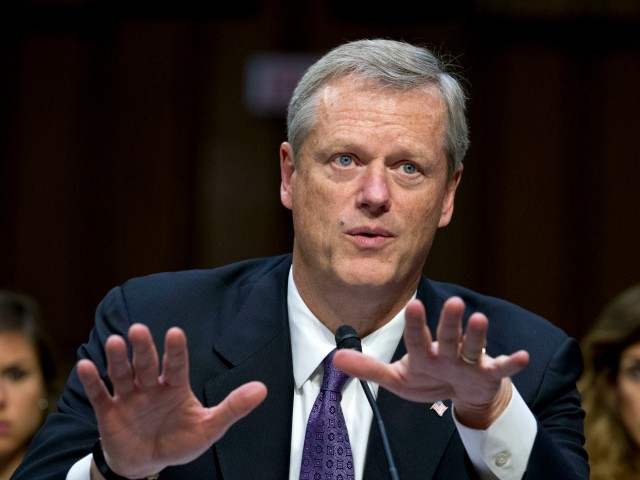 In this Sept. 7, 2017, file photo, Massachusetts Governor Charlie Baker speaks at the Senate Health, Education, Labor, and Pensions Committee hearing to discuss ways to stabilize health insurance markets​, on Capitol Hill in Washington. Some lawmakers, activists and medical groups in Massachusetts are pushing for the creation of “supervised injection sites” where drug users can shoot up illegal substances under the watchful eye of staff trained in countering the effect of potentially fatal overdoses. Supporters said the sites could reduce the staggering toll of opioid-related overdose deaths in Massachusetts. Baker says he’s skeptical. (AP Photo/Jose Luis Magana, File)

Up to 75% of Massachusetts’ funding is expected to go directly to arriving families, with the remaining 25% bolstering refugee resettlement organizations, the International Institute of New England has said. The funding could provide, on average, about $3,000 per refugee, or $12,000 in additional support for a family of four. [Emphasis added]

As of last week, more than 1,500 Afghans had been resettled in the state, a U.S. Department of State spokesperson said Monday. [Emphasis added]

Baker joins the likes of New York Gov. Kathy Hochul (D), who has forced state taxpayers to foot the bill for Afghan resettlement to the sum of $5 million. Like Massachusetts, the state expects to resettle nearly 2,000 Afghans.

Last week, Rep. Lance Gooden (R-TX) sounded the alarm on NGOs contracting with the federal government to resettle refugees in the United States — noting their “vested financial interest” in importing as many refugees as possible each year, as their taxpayer-funded budgets rely on those totals.

Biden’s Afghan resettlement has already brought more than 75,000 to the U.S. in six months. As Breitbart News has reported, many Afghans are offered free housing, food stamps, job training, as well as $2,300 checks.

The nation’s Afghan population has exploded since former President George W. Bush started the Afghanistan War in 2001. The number of Afghans living in the U.S., for instance, has shot up to 133,000 in 2019 — more than three times the 44,000 Afghans who lived in the U.S. before the start of the war.