The Ambassador Bridge connecting Canada and the U.S. remains blocked by Canadian demonstrators on Saturday night, over 24 hours after a deadline issued by a Ontario Superior Court Justice Geoffrey Morawetz via injunction to restrain individuals from blocking the bridge between Windsor, ON, and Detroit, MI.

Reuters described the status quo as a “standoff” late Saturday night between Canadian law enforcement and protesters at the Ambassador Bridge, blocking traffic in both directions. The demonstrators are demanding an end to restrictions on constitutional rights imposed by government and marketed as “COVID-19 restrictions” by left-wing news media.

The Windsor Police Service said it began ticketing and towing vehicles to end the blockade of the U.S.-Canada bridge.

Active enforcement in relation to parking in the area of the protest is commencing. Vehicles are being ticketed and towed.

Police negotiators wearing blue surgical masks outside told demonstrators they “can be arrested for mischief” if they do not “leave” the area. They were then told they “will be arrested” if they do not comply with police instructions.

You will be arrested police negotiators say. pic.twitter.com/o2MOHqduq5

The City of Windsor explained via statement that Morawetz’s order commands them to cease blocking access to the bridge by 7:00 PM ET on Friday:

After hearings held on Thursday February 10 and Friday February 11, 2022 Chief Justice Morawetz of the Ontario Superior Court of Justice granted an injunction to restrain individuals from establishing a blockade, or in any way impeding access, to the Ambassador Bridge.

Effective 7:00 pm on Friday, February 11, 2022, any persons having notice of the Order granting the injunction are restrained and enjoined from impeding or blocking access to the Ambassador Bridge and indirect or direct approaching roadways and access points for ten (10) days.

People remain at liberty to engage in a peaceful, lawful and safe protest that does not impede or block access to the Ambassador Bridge and approaching roadways. The terms of the Order and any applicable law must be complied with

Morawetz wrote, “[A]ny persons having notice of this Order are hereby restrained and enjoined from impeding or blocking access to the Ambassador Bridge
and indirect or direct approaching roadways and access points for ten (10) days from the date of this Order.” 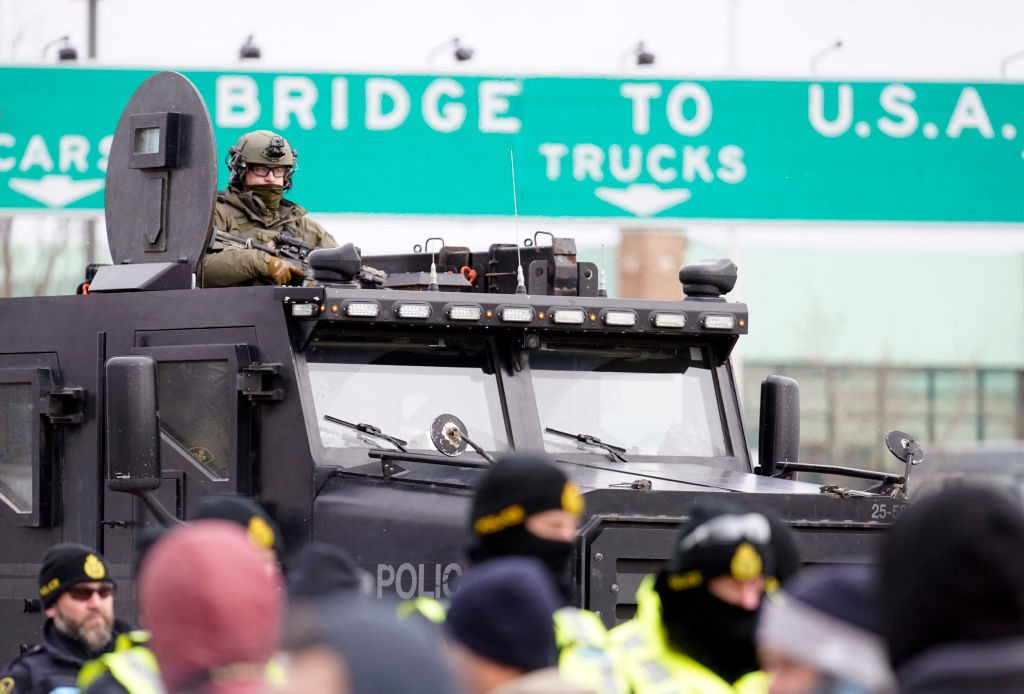 He added, “Police or designated agents shall have authorization to remove any vehicles, personal property, equipment, structures, or other objects that impede or block access to the Ambassador Bridge and approaching roadways.”

Prime Minister Justin Trudeau described the demonstration as an “illegal blockade.” He promised to convene meetings among several law enforcement agencies to end it and the Freedom Convoy protest in Ottawa, ON, which he regularly describes as an “illegal occupation.”