After months of some vulnerable Democrats trying to avoid mentioning or being seen with President Joe Biden, many are now saying they would welcome him to their district.

Multiple vulnerable Democrats spoke with Punchbowl News and said they would welcome him to their district if he were to volunteer to come.

When asked, Rep. Susan Wild (D-PA) told the publication, “Anytime.” She added, “I always welcome the president to the district; he’s been to my district, I hope he comes back.”

“I think if he wants to come and help deliver, help fix another bridge, if he’s got resources, then I’ll take anyone to come, if they got resources to help my district,” said Rep. Josh Gottheimer (D-NJ), who was critical of his party at times last year trying to pass the infrastructure bill. 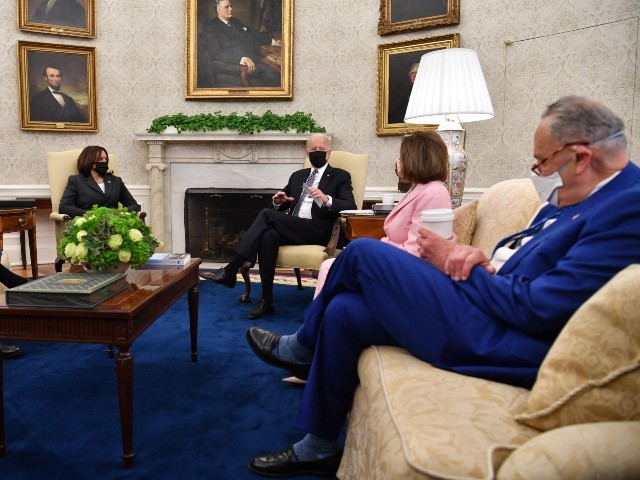 President Joe Biden and Vice President Kamala Harris meet with members of Congressional Leadership, including Senate Majority Leader Chuck Schumer and Speaker of the House Nancy Pelosi, to discuss policy areas of mutual agreement, in the Oval Office of the White House in Washington, DC, on May 12, 2021. (Photo by NICHOLAS KAMM/AFP via Getty Images)

Rep. Dan Kildee (D-MI) also told Punchbowl that he would “For sure” welcome Biden to the district when he was asked, along with Rep. Susie Lee (D-NV), who said, “yeah” when asked the same thing.

Rep. Mike Levin (D-CA) added that he would “Of course” be “excited” to see Biden “if he ever decided to come to Southern California.”

Two vulnerable Virginia Democrats — Rep. Abigail Spanberger and Rep. Elaine Luria — were also asked by Punchbowl. Spanberger, whose district Biden recently visited and had an event with the congresswoman, said she “would welcome a visit from Biden to [her] district.”

Additionally, Luria, whose district he has also been to in the past said that he has already “come down a couple of times,” and she “think[s] it is important that the president regardless of who it is, or which party, gets around the country and visits people and hears from” Americans. She added, ” I will be there with them.”

This comes after Axios reported that vulnerable Democrats incumbents and candidates in tough elections nationwide have appeared to have avoided mentioning the president’s name on campaign accounts in recent months as the midterm elections get closer. Biden’s approval rating continues to drop after being in office for over a year.