The United Nations Security Council held its second meeting this week on Russian aggression against Ukraine late Tuesday – a meeting presided over by the Russian ambassador ending with Ukraine’s envoy warning he would “go straight to Hell.”

Russian strongman Vladimir Putin announced an invasion of Ukraine in the early morning hours of Thursday that, reports indicate, has gone far beyond the Donbas region Putin claims he is protecting and included reported explosions in Kyiv, the national capital hundreds of miles from the Russian border.

At press time, the Ukrainian government has called the attack a “full-scale” attempt to overthrow the democratically elected government of President Volodymyr Zelensky and announced a program to rapidly distribute weapons to as many Ukrainian citizens as possible.

Russian Ambassador Vassily Nebenzia used his status as president to condemn Ukraine for causing its own invasion, blaming the Zelensky administration, which took office in 2019, for the Maidan pro-democracy protests in 2014 that led to the resignation of Putin proxy Viktor Yanukovych.

“The tragedy in Ukraine started indeed after the illegal coup in Maidan in 2014 when, rather than dialogue with the Russian-speaking citizens of Ukraine, the new authorities brandished guns and airplanes at them,” Nebenzia claimed. In reality, Yanukovych’s security forces killed over 100 mostly peaceful protesters who had flooded the heart of Kyiv urging their government to move away from Russian influence and embrace Europe. The Maidan protests led to the election of Petro Poroshenko, the president Zelensky defeated in the 2019 vote.

Nebenzia also claimed that “occupation of Ukraine is not in our plan,” a remark that outraged Ukrainian Ambassador to the United Nations Sergiy Kyslytsya.

Kyslytsya told the assembly that his prepared statement was “useless” because there was no longer any time to prevent full-scale war.

The Ukrainian ambassador urged Russia to give up the presidency of the Security Council.

Kyslytsya received the final remark at the meeting, which he used to condemn Nebenzia and the Russian government to Hell.

“There is no purgatory for war criminals, they go straight to Hell,” Kyslytsya said. 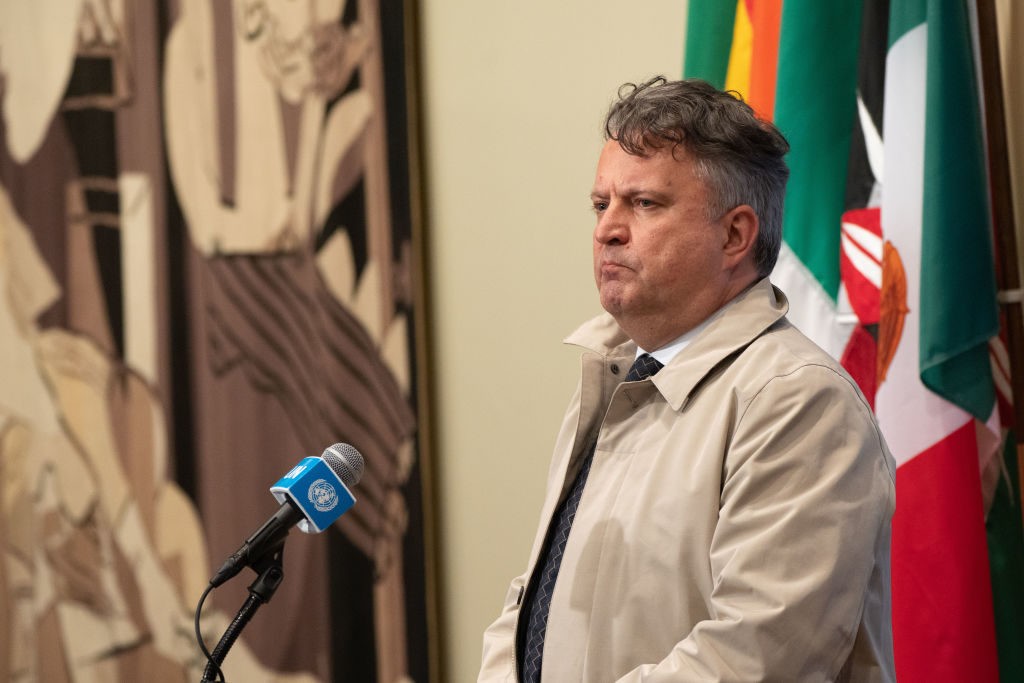 Permanent Representative of Ukraine to the United Nations Sergiy Kyslytsya speaks after the United Nations security council’s emergency meeting to discuss the threat of a full-scale invasion by Russia of Ukraine on February 23, 2022 in New York City. The Kremlin shared that two breakaway regions of Ukraine have requested protection. President Volodymyr Zelenskyy appealed to the Russian people in a televised address stating “The Ukrainian people want peace.” (David Dee Delgado/Getty Images)

The Security Council took no measures on Thursday night. It remains unclear at press time if it will be able to pass any resolutions, much less take action, given that Russia has veto powers on the body.

Russia invaded Ukraine in 2014, colonizing its Crimean peninsula and starting a war in the eastern Donbas region that Moscow has now used as an excuse to attack the rest of the country. In remarks on Monday, Putin proclaimed that Ukraine was a fabrication of Vladimir Lenin’s and did not have a “tradition” of being a real country.

The speech was nominally to announce that Putin would recognize the two regions of Donbas, Donetsk and Lugansk, as sovereign states independent of Ukraine. Thursday’s attack, according to the Kremlin, was at the request of those sovereign “states.”

Ukrinform, a Ukrainian state media outlet, reported on Thursday that the Russian military had attacked at least five major cities outside of Donbas overnight: Odessa, Kyiv, Kharkiv, Dnipro, and Mariupol.

“The invasion has begun. There have just been missile strikes on military command centers, airfields, and military depots in Kyiv, Kharkiv, and Dnipro. There are artillery shelling of the border,” Adviser to the Minister of Internal Affairs Anton Herashchenko confirmed, according to Ukrinform.

The state outlet later reported that the critical port city of Mariupol had been attacked by “Smerch multiple launch rocket systems” in its residential areas. Ukrainian officials have confirmed at least three deaths in the city.