Following Steinle’s 2015 killing on a pier in San Francisco, California, 51-year-old illegal alien Jose Garcia Zarate was charged with her murder after being caught on surveillance footage running from the shooting.

After his arrest, Garcia Zarate admitted to shooting and killing Steinle, who was walking on the pier at the time with her father, saying he chose San Francisco because it was a sanctuary city that shields criminal illegal aliens from arrest and deportation by federal immigration officials.

On November 30, 2017, Garcia Zarate was found not guilty of murdering Steinle. 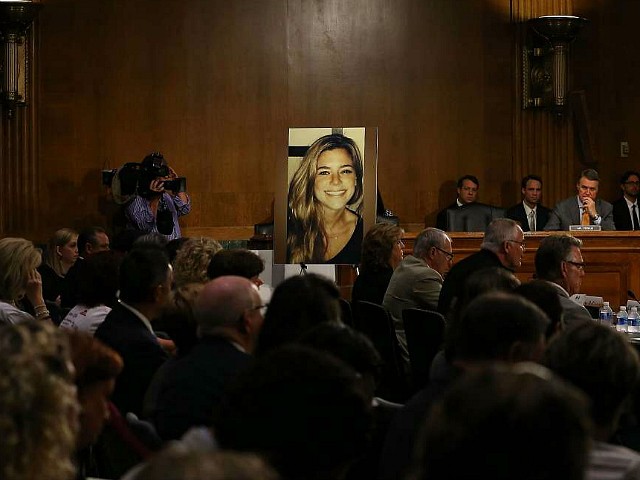 A large photo of Kathryn ‘Kate’ Steinle who was killed by an illegal immigrant in San Francisco, is shown while her dad Jim Steinle testifies during a Senate Judiciary Committee hearing on Capitol Hill, July 21, 2015, in Washington, DC. (Mark Wilson/Getty Images)

Following the verdict, Garcia Zarate was hit with federal gun charges for having a firearm while in the United States illegally. In February 2020, as Breitbart News reported, Garcia Zarate had initially been deemed mentally unfit to stand trial for the charges, but last month, a doctor found him fit for trial.

Late last year, Garcia Zarate’s attorneys pleaded with President Joe Biden to free him from federal custody. On Tuesday, prosecutors announced that Garcia Zarate had pleaded guilty to the charges.

“The charges are because I was in the country illegally and I had a firearm,” Garcia Zarate said through an interpreter.