The vast majority of Americans, 87 percent, acknowledged that they are paying more for groceries now than they were one year ago. That includes 93 percent of Republicans, 85 percent of Democrats, and 84 percent of independents.

The survey also asked respondents if the rising food prices caused them to change their eating habits, and 55 percent said it has. Half of Democrats say this is the case for them, and 62 percent of Republicans and 56 percent of independents said the same:

Republicans (77%) are more likely than Democrats (55%) or those not affiliated with either major party (63%) to expect that the amount they spend on groceries a year from now will be higher. Democrats are less likely to say rising food prices have caused them to change their eating habits.

Women (58%) are more likely than men (53%) to say rising food prices have caused them to change their eating habits.

Older Americans are more likely than those under 40 to say they’re paying more for groceries now than they were a year ago. 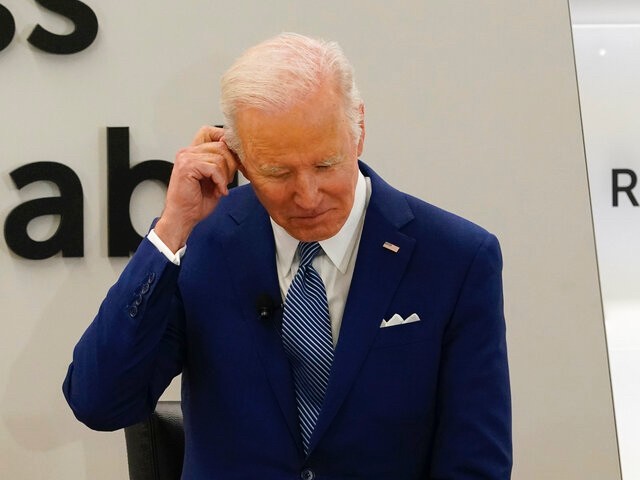 The survey was taken April 18-19, 2022 among 1,000 U.S. adults and has a +/- 3 percent margin of error. It comes as Biden and Democrats continue to suffer negative ratings heading into the midterm elections, as they refuse to take responsibility for high gas prices and rampant inflation.

While one third of Americans say they have actively had to cut groceries in order to afford gas, Democrats remain in denial. Both Senate Majority Leader Chuck Schumer (D-NY) and House Speaker Nancy Pelosi (D-CA) held a press conference on Thursday where they blamed Russia, as well as oil and gas companies, for stunningly high prices.

“No. I don’t think the public is blaming Democrats,” Pelosi said, ignoring the left-wing policies that led to the current state of affairs, including printing trillions of dollars and slashing American energy independence.

“I think they’re blaming oil companies. They will blame all of us if we don’t do something about the fossil fuel industry,” the 82-year-old Democrat added.