Most Republicans continue to support former President Donald Trump as the Republican Party’s frontrunner in the 2024 presidential election, a University of Massachusetts Amherst released Friday found.

The survey asked Republican respondents to rank their top three choices for individuals to run as the GOP’s candidate in the 2024 presidential election.

Most, 55 percent, chose Trump as their first choice. That figure is unchanged from the 55 percent who said the same five months ago in December 2021.

Another 20 percent chose Florida Gov. Ron DeSantis (R) as their first choice, with no other candidate coming close.

Despite Trump’s firm grip on first, DeSantis remains the top second choice among Republicans, as 34 percent chose him in that category. That represents a three percent drop from the 37 percent who chose him as their second place candidate in December 2021.

Another 25 percent chose Sen. Ted Cruz (R-TX) as their third choice in the lineup, behind Trump and DeSantis.

The survey asked the same of Democrats in ranking the Democrat presidential candidate in 2024. While it showed Biden leading, he failed to garner majority support as the top candidate, seeing just 33 percent. Perhaps what is most significant is that the figure represents a seven-point drop from the 40 percent who chose Biden in December 2021, further demonstrating the reality of Biden’s waning support even among members of his own party. 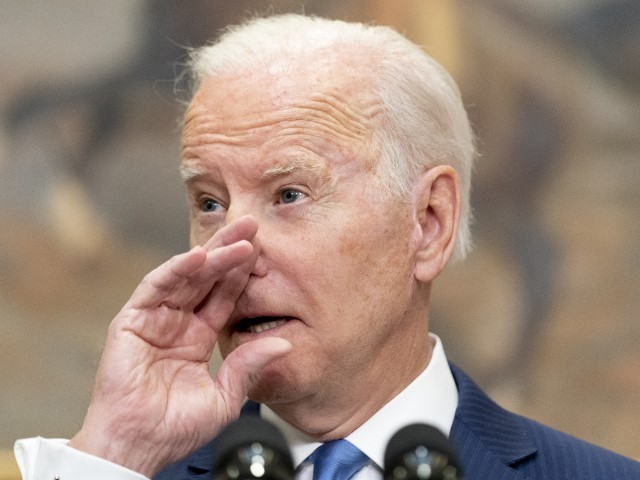 President Joe Biden speaks about the war in Ukraine in the Roosevelt Room at the White House, Thursday, April 28, 2022, in Washington. (Andrew Harnik/AP)

Notably, 17 percent of voters chose Sen. Bernie Sanders (I-VT) as their first choice candidate, but he also stood as the top second choice among Democrats, garnering 19 percent support. Third place remained a tie between Sen. Elizabeth Warren (D-MA) and “someone else,” as both garnered 15 percent.

The full survey was taken May 5-9, 2022, among 1,000 respondents and has a +/- 3.5 percent margin of error. It comes as Biden continues to struggle to rally Democrats ahead of the midterm elections as “frontline” Democrats — those who are in vulnerable positions — beg party leaders to pursue bipartisan legislation in hopes of saving their majority in the wake of Biden’s stunning lack of popularity.