Rep. Elise Stefanik (R-NY) said the Biden administration has continued to put out “false information” to cover up its failures on the baby formula crisis plaguing the country, telling Breitbart News Daily that her office began sounding the alarm on the issue months ago.

“This should have been caught earlier on, and Republicans, including my office, was sounding the alarm about this crisis back in February when there was an announcement that the Abbott plant in Sturgis, Michigan, was shut down,” she said, explaining that she reached out to the Food and Drug Administration (FDA), which failed to respond to a congressional office until May.

“We now know from the CEO of Abbott that the FDA slow walked their approval to reopening that,” Stefanik explained, accusing the Biden administration of “putting out false information trying to cover up for their failures to identify where we were going to get supplies.” 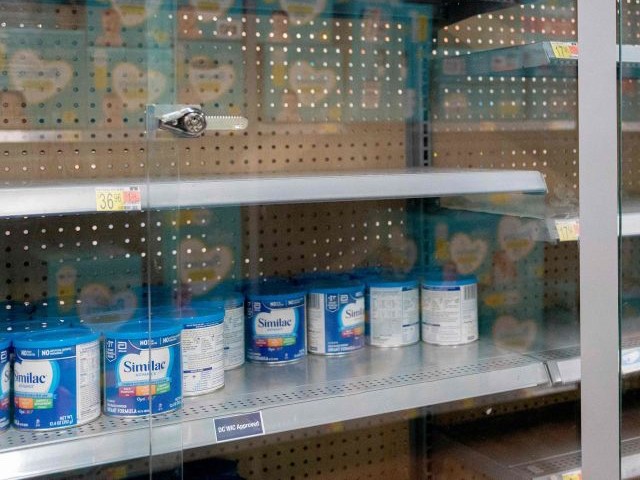 Grocery store shelves where baby formula is typically stocked are nearly empty in Washington, DC, on May 11, 2022. (STEFANI REYNOLDS/AFP via Getty Images)

She also said they “slow walked getting the Sturgis, Michigan, facility back online.”

“So they’ve been aware of this. They’ve done everything they could not to talk about this crisis. That’s how out of touch they are. They laughed about it. That was the first public sound coming out of this administration was the newly appointed press secretary was laughing about not knowing who is responsible for baby formula,” the congresswoman said, adding that she, a mom of a nine-month-old boy, has heard stories from parents all over the country, detailing the “absolute terror” of not being able to access formula and food for their babies.

“It was only because that press conference that Joe Biden had to scramble and that day changed his schedule to set up a call with formula manufacturers to try to show any semblance of competency which is you know, far out the door for this administration. There is no plan from the Democrats,” she said, adding that she is working on legislation designed to require the FDA to “present the public with a plan” before shutting down these types of places. The details should include how they plan to get them back up and running as well as how they will cover supply chain issues.

“I think this is a much larger scandal than people realize,” she said.

Breitbart News Daily host Alex Marlow also asked Stefanik to weigh in on the tragic Buffalo shooting, which Stefanik labeled as “pure evil.”  However, she also berated the establishment media for using the tragedy to “try to score political points.”

“This was filth and heinous, and we actually don’t know from law enforcement, the full extent in terms of what this horrible criminal, you know, what led to this,” she said, adding that “there’s a lot of questions that need to be answered.”

“But the fact that now mainstream media is accusing Republicans who support border security and support and oppose amnesty for illegals as somehow leading to this — it’s outrageous. It’s disgraceful. It’s dangerous,” she said, expressing confidence that the American people “see through this.”

“It’s a disgrace on the media, and frankly, it’s disgraceful for the people of Buffalo to see the media take advantage politically of this horrific tragedy,” she said. “This criminal should be prosecuted to the fullest extent of the law and New York state should consider reinstating the death penalty.”