Rep. Raja Krishnamoorthi (D-IL) asked Sturm, Ruger, & Co. to pledge not to sell ammunition that pierces body armor, to which Ruger CEO Christopher Killoy responded that Ruger is not involved in ammunition sales.

The exchange between Krishnamoorthi and Killoy occurred during the Committee on Oversight and Reform’s Wednesday hearing on “practices and profits of gun manufacturers.”

Krishnamoorthi used his time to question witnesses on a variety of issues, the last of which was police officer safety. He asked Daniel Defense CEO Marty Daniel to commit to “not sell a weapon that tears through bulletproof vests” and then moved to the next witness when Daniel talked about his company’s commitment to self-defense.

Krishnamoorthi addressed Killoy, saying, “[I] assume you won’t sell a weapon that tears through bulletproof vests, will you?” 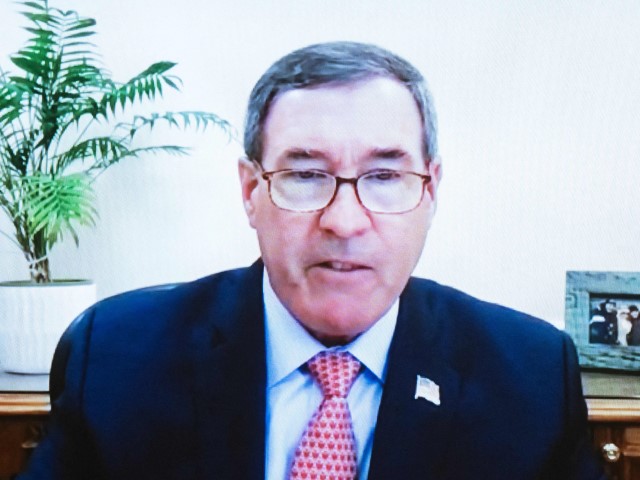 Christopher Killoy, President and CEO of Sturm, Ruger and Company, Inc., testifies virtually during a House Committee on Oversight and Reform hearing on “Examining the Practices and Profits of Gun Manufacturers,” on Capitol Hill in Washington, DC, July 27, 2022. (SAUL LOEB/AFP via Getty Images)

Killoy responded, “Congressman, with all due respect, the ability to pierce body armor typically relates to the ammunition, not the firearm.”

Krishnamoorthi shot back, “So you will not sell that ammunition either, will you?”

Killoy explained, “Congressman, we do not sell ammunition. We sell firearms in a variety of calibers.”