Bank of America analysts issued a report on Friday warning that America’s military support for Ukraine in the conflict with Russia has pushed United States military stockpiles to “dangerously low levels” not seen for decades.

As part of $16.2 billion in support committed to Ukraine since Russia invaded in February, the Department of Defense (DoD) has sent approximately $8.4 billion worth of military equipment from its own weapons stockpiles through an authority known as “presidential drawdown.”

The analysts wrote in their Friday report:

Presidential drawdowns have pushed US weapons stockpiles to dangerously low levels that have not been seen for decades. On several ground systems, DoD officials have indicated that ammunition stocks have dwindled to levels that would be considered problematic during wartime.

The analysts wrote that as the United States continues to provide military assistance to Ukraine, major defense contractors have been tasked with meeting demand throughout Europe and restocking United States military inventories depleted as a result of the 20 presidential drawdowns since August 2021.

They forecasted that Raytheon Technologies (Defense Secretary Lloyd Austin’s employer before he become defense chief), Lockheed Martin, and General Dynamics are best positioned to benefit from the demands, given their experience in producing “legacy ground-based systems.” 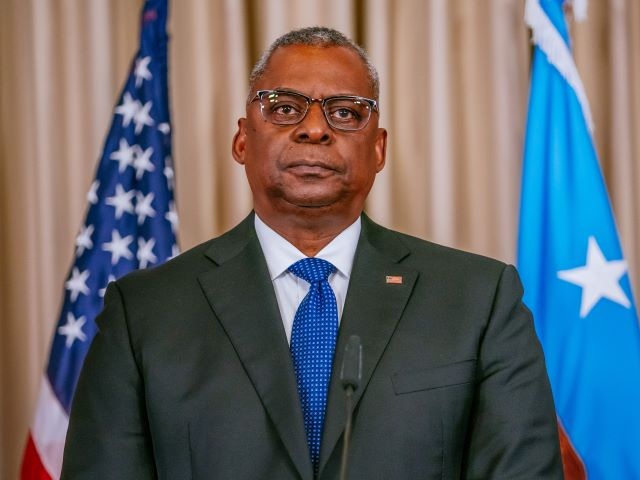 U.S. Secretary of Defense Lloyd Austin attends a press conference after a meeting of the Ukraine Defense Contact Group at the U.S. military’s Ramstein air base on September 8, 2022, in Ramstein-Miesenbach, Germany. The Ukraine Defense Contact Group is a U.S.-led effort to bring together defense leaders from dozens of countries across the globe in order to facilitate military support for Ukraine in its ongoing efforts in fighting Russia’s military invasion. (Thomas Niedermueller/Getty Images)

They wrote that the DoD was actually expected to pivot away from those systems as it looked to shift away from the ground-based wars in the Middle East to preparing for war in the Pacific, but that the Ukraine conflict has renewed their importance.

“The DoD’s shift in focus to the Pacific and away from ground conflicts in the Middle East previously cast doubt on the fate of some ground-based defense programs,” they wrote. For example, they noted that Raytheon almost stopped producing High Mobility Artillery Rocket Systems (HIMARS) in 2021, but now efforts are being made to ramp production back up.

The DoD announced earlier this week that it would send 18 HIMARS and associated ammunition to Ukraine. The delivery would not be immediate, but would take several years, according to defense officials.

“HIMARS provide a highly effective precision fires capability. We’ve all seen how Ukraine has leveraged this system to push back against Russia’s war of aggression, disruption [of] ammunition depots, supply lines and logistical hubs far behind the front lines,” a senior defense official said during a briefing this week.

“This package of HIMARS, these 18 HIMARS and associated ammunition will constitute a core component of Ukraine’s fighting force in the future. One that can deter and defend against all threats. The procurement and deliver [sic]of these HIMARS systems and associated ammunition will take a few years. Today’s announcement is only the beginning of a procurement process,” the official said.

So far, according to the Bank of America report, the U.S. has committed 34 HIMARS to Ukraine, as well as:

The report noted that Undersecretary of Defense for Acquisition and Sustainment Bill LaPlante was scheduled to meet with procurement officers from allied nations on Wednesday to discuss how the global industrial base and “that of the U.S. in particular” could support the Ukrainian effort.