Ross said she wanted her book to provide a bit of lighthearted fun and gentle wisdom during harsh and heavy times.

“There’s so much seriousness, and heaviness, and news, and politics, as you know, because you’re in it constantly,” she told Boyle.

In contrast, she said her book is filled with fun quotations from her aunt, Alma Ross:

And you know how old people are: they just say whatever they want to say. And when you read it, you kind of shake your head and go, “Did she just say that? Did this lady actually just say that?”

And that’s what it is. People have kind of coined her, if you’re familiar with that cartoon character “Maxine” that’s so popular – “Man! She’s like the Black Max.” She’s [speaking] in this southern black dialect. It’s just funny, and so people are loving it and laughing.

Ross said Aunt Alma, who lives in New York City, helped raise her. She wrote the book as a tribute to her beloved aunt, whom she credits with helping her achieve everything she has done in her career as a teacher, editor, and writer.

It was an unexpected tribute for Aunt Alma. “She didn’t know I was writing this book, Matt,” Ross said with a laugh:

She didn’t know I was writing quotations down when she was speaking, putting it on social media. That’s why we’ve got that hashtag there, hashtag AuntAlma, because I just began sharing, innocently, what she was saying, and people just started loving her, and saying, “Hey, I want a book. I want that on a mug. I want that on a T-shirt.”

And I hired an illustrator, and we began to collaborate, and the rest is history. I’m working on book number two now, and she still has no idea that when she speaks, I’m taking notes.

Ross teased that the second #AuntAlma volume will have “more quotations, more illustrations.” She added, “And I’m going to write more stories because one of the things that people said to me is, ‘I was getting to know her, I was laughing my head off, and I wanted more.’”

“And so we’re going to expect more of the same – just funnier, just more. And like I said, the illustrator and I are already in the works for that,” she promised. “I call this ‘Aunt Alma 2016: Make America Laugh Again’ because we need to laugh more.”

In addition to her book being available from Amazon.com and Barnes & Noble in both paperback and e-book formats, Ross has created a website, AuntAlma.com, filled with illustrations and quotes from the book, along with reader reviews. Notably, former Alaska governor and vice presidential candidate Sarah Palin endorsed Ross’s book, posting her review on Facebook and Twitter. Aunt Alma also has a Twitter feed and Facebook page. 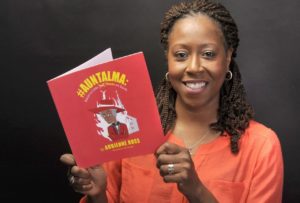 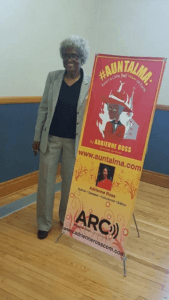 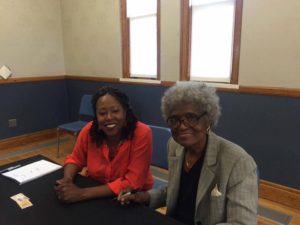