Rep. Nancy Mace (R-SC) noted on Wednesday’s edition of SiriusXM’s Breitbart News Daily with host Alex Marlow that every Democrat on the House Oversight Committee voted against her proposal to survey the equipment and weapons abandoned in Afghanistan by the Biden administration.

Mace said she proposed an investigation of the national security implications of military equipment abandoned by the U.S. government in Afghanistan in her capacity as a member of the House Oversight Committee. She introduced a legislative amendment to utilize “a very nebulous line dealing with $25 million” to “invest and look at what [military equipment]” was given up in Afghanistan.

“What did we leave behind?” she asked. “What was its value? What could have national security risks do we have by what we left behind in Afghanistan and not knowing that information?”

Mace stated, “Every single House Democrat voted against what I would say is a very common-sense amendment. If you care about our country [and] our national security here and abroad, then you would care to know what we left behind, but they all voted against it. It’s just so unbelievable to me that that’s where we are as a country.”

“They’d rather spend your money figuring out how to do social and environmental justice spending [and] socialist program spending than to figure out what we did in Afghanistan, what we left behind, and what our national security risks are,” she noted.

“I’m grateful for Senators Joe Manchin and Kyrsten Sinema right now,” she remarked. “They have prevented some really horrible and bad legislation from passing in the Senate from the House. These are people that we need in order to help stop this freight train that’s happening.”

“When [Border Patrol agents] are able to test illegals coming across, I think the rate of COVID-19 is around 40 percent of all the illegal aliens who are crossing the border,” she stated. “The cartel … makes more money on human trafficking, because people pay between five and eight thousand dollars to get across the Rio Grande. They pay the cartel that money.”

“They’re making more money on human trafficking than they are on trafficking drugs,” she added. “Every person that we let across that order illegally, we fund the cartel. So why we would support funding the cartel through this is beyond me. If we had a legal immigration system that worked, we wouldn’t be funding the drug cartels in  Mexico and elsewhere, but we are because of this policy.” 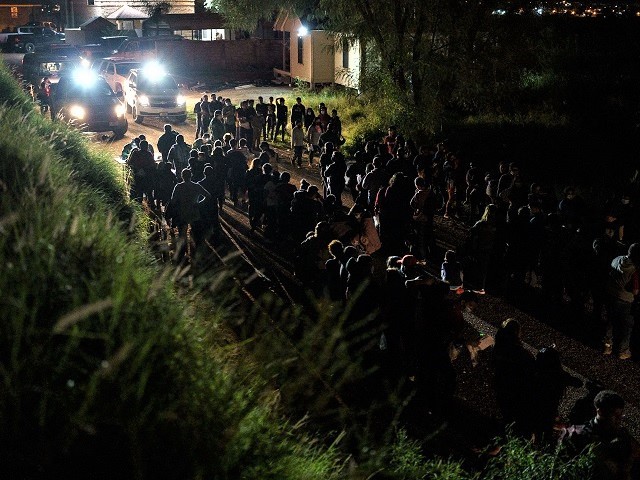 United States Border Patrol agents process migrants who crossed the US-Mexico border into the United States in Roma, Texas on July 9, 2021 – Republican lawmakers have slammed Biden for reversing Trump programs, including his “remain in Mexico” policy, which had forced thousands of asylum seekers from Central America to stay south of the US border until their claims were processed. (Photo by PAUL RATJE/AFP via Getty Images)

“The night that we were there, we saw 50-plus illegal aliens trying to cross,” she remarked. “Whether that was vis-a-vis 18-wheeler trucks through the interstate I-35 or over the Rio Grande. At that time of the night, it was like two to three feet of water.”

Both local Democrat and Republican elected officials in border regions are “furious with the Biden administration reversing Trump’s policies,” Mace said, “particularly building the wall. Across Laredo, where the border agents monitor 135 miles, they already had steel for about 70 miles of wall and Biden overturned that. The wall was already funded down on Laredo, Texas and it would have relieved so much strain on these agents, where there’s massive turnover.”

She concluded, “[Border Patrol agents] are assaulted on a daily basis. They often work alone down there. This isn’t just a Republican issue. This is an issue that Republicans and Democrats — when you talk to them along the border — they’re not with Biden on this.”