Gordon Chang, author of The Coming Collapse of China and The Great U.S.-China Tech War, said on Thursday that President Joe Biden is not defending U.S. interests in terms of foreign policy towards China.

“Biden does not want to defend American interests with regard to China,” Chang stated on SiriusXM’s Breitbart News Daily with special guest host Jerome Hudson. The Biden administration prematurely offers concessions to the one-party state via John Kerry, its “climate czar,” he added.

Chang recalled, “In February 2009, [Kerry’s] predecessor as Secretary of State, Hillary Clinton, actually said … just before she went to Beijing, ‘Well, we’re not going to press on Tibet and Taiwan and a lot of other things, because we have bigger fish to fry with China.’  When Chinese leaders heard that, they were ecstatic because they felt — according to one observer, very close to the Beijing leadership — that Clinton had performed the full kowtow before the celestial court, and that really meant that they gave her a hard time.

“Just after [Clinton] left Beijing, China started to harass unarmed U.S. Navy reconnaissance vessels in its peripheral waters, and one of those harassments was so serious that it actually constituted an attack on a U.S. vessel, which meant an act of war.”

Chang remarked, “If you want to negotiate with the Chinese, you don’t show friendship beforehand, you have to impose costs, because you have to give Beijing an incentive to do what you want. [John] Kerry’s got it backwards.”

“[China] simultaneous crises,” he assessed. “It has an economy which looks like it’s contracting. It’s got the rolling power blackouts/ It’s got the flooding. The environment is exhausted. It’s got worsening food shortages, and China can’t feed itself, and it’s on the edge of the steepest decline in demography in world history in the absence of war or disease.” 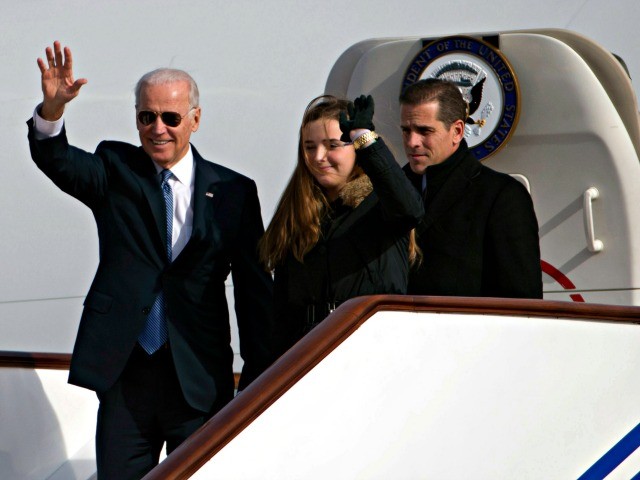 U.S. Vice President Joe Biden waves as he walks out of Air Force Two with his granddaughter, Finnegan Biden (C) and son Hunter Biden (R) upon their arrival in Beijing on December 4, 2013. (NG HAN GUAN/AFP/Getty Images)

He concluded, “Two Chinese demographers, about two weeks ago, came out with a study that says that China’s population could fall in half in 45 years. That means going from 1.41 billion now to maybe 700 million by 2065, and by the end of this century, China could be about the same number of people as the U.S.

“Now it’s about four times more populous. This is is going to be stunning.”