“[Buttigieg] in charge of the most critical infrastructure in the United States of America,” Root said on SiriusXM’s Breitbart News Sunday with host Joel Pollak. “If we don’t have Christmas, if there are no presents in the supply line, and there’s not enough food, and the shelves are empty towards Thanksgiving and Christmas, you can blame America’s first openly gay transportation secretary who thought it was more important to coo with his baby and cuddle with his husband.”

Root continued, “This is what you get with this liberal attitude, this permissive, politically correct attitude, ‘I’m more important than you. I am gay, and I adopted two babies.’ No, you’re not. You’re the transportation secretary. We don’t care if you’re gay or straight, have a baby or don’t have a baby. Your baby is America. You agreed to take care of America.”

He added, “It’s like a father saying, ‘I got busy [with an] appointment, and I know I’m supposed to be watching my kids. I know they’re my kids. I know I should care, but I’m too busy. I don’t care.’ That’s what he just said to America. He said, ‘All of you can go to hell. I got two babies to watch.’ It’s the most ludicrous thing I’ve ever heard.” 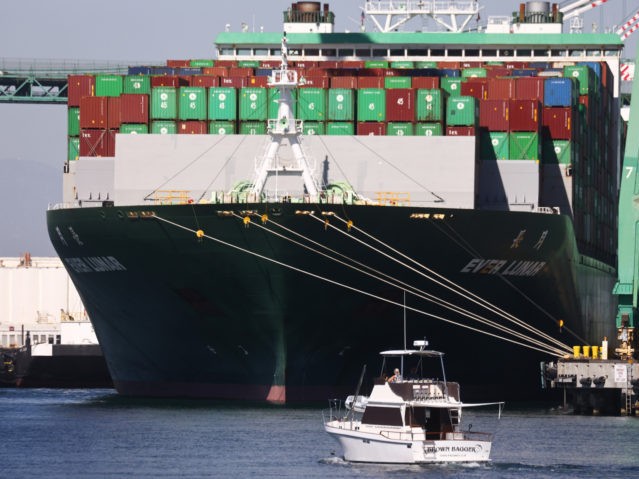 A recreational boat passes near the Ever Lunar container ship at the Port of Los Angeles, the nation’s busiest container port, on October 15, 2021, in San Pedro, California. (Mario Tama/Getty Images)

“Mayor Pete [is] bringing America to its knees,” he remarked. “He’s the guy in charge of transportation in the United States and our supply lines, and he’s home on maternity-paternity leave. It’s the most ludicrous thing I’ve ever heard of in my entire life. He’s a gay dad that went home to be with his husband and their new babies, their adopted new babies. He needs three months paid leave for that?”

Root stated, “If I’m the transportation secretary, I can’t worry about my son’s little league game. When you take a position that important, you’ve got to commit that you’re going to give 18-hour days to run America.”

Buttigieg characterized criticisms of his leave as rooted in bigotry against homosexuals. In a tweet on September 4, Buttigieg announced that he and his spouse, Chasten Buttigieg, were “becoming parents” of fraternal twins.

Buttigieg did not explain the circumstances of the twins’ birth.