Rep. Greg Murphy (R-NC) told Breitbart News on Friday that the GOP Doctors Caucus is “infuriated” that the Biden administration and Dr. Anthony Fauci, director of the National Institute of Allergy and Infectious Diseases (NIAID) and the president’s top medical adviser, have “been all about vaccination” and not therapeutics in their response to the coronavirus outbreak.

“We’re not going to vaccinate our way out of it,” Murphy, a urologist, said on SiriusXM’s Breitbart News Daily with host Alex Marlow.

He went on, “Duke University, just last week, posted they’re finally, finally, going to be studying — doing studies of — Ivermectin. There’s been so much data, not only from this country but from other countries, that have shown that it has efficacy in this particular arena, and there are other things — fluvoxamine, probenecid — other drugs that could be repurposed but are not big sexy expensive drugs. And this is where we should have gone a year and a half ago when we knew we were not going to vaccinate our way out of this.”
Murphy continued, “There should be something that we should be able to write and prescribe that’s not $800 a pill for people who test positive to try to get them better, not only keep them out of the hospital, but get them better, get them back to work, and let society function, I think this is a major problem.”

Fauci has contributed to broad erosion of public trust in the healthcare industry and physicians, Murphy held.

“Fauci, I’m going to blame [him] as the biggest reason – his arrogance – [that] the trust of the American people in health care — and in doctors, in particular — has plummeted,” he stated. 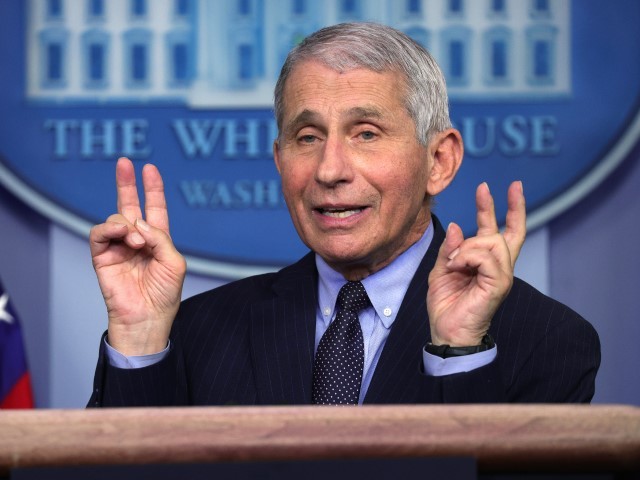 Murphy expressed hope that subsequent variants of the novel coronavirus would be less dangerous.

“So we only pray that with this last surge — which was much, much more infectious, but less overall lethal — that we’ll be moving towards a virus that is less pathological for individuals,” he stated. “I will note, though, however, last week at the peak of Delta, that we lost as many last week from Omicron as we did during the peak of Delta. Why? It’s not because of its lethality itself, it’s just because the pure numbers of individuals [infected].”