George Soros’s Open Society Foundation (OSF) has donated over $1 million to organizations that work to normalize and legalize prostitution.

George Soros’s OSF donated a total of $185,000 to an organization called the Sex Workers Outreach Project (SWOP) in 2019 and 2020. The organization is just one of several groups that has received funding from OSF and advocates for the normalization of prostitution.

According to their mission statement, the organization calls itself “a national grassroots social justice network dedicated to the fundamental human rights of sex workers and their communities,” with a focus on “ending violence and stigma through education, community building, and advocacy.”

Their website also explains that the organization was founded when prostitutes in California’s Bay Area protested the arrest of a prostitute named Shannon Williams, who was also an employee at Berkeley High School.

The website also notes, “SWOP has grown into a national network of regional chapters and local activists. This network works together to address stigma and criminalization.” 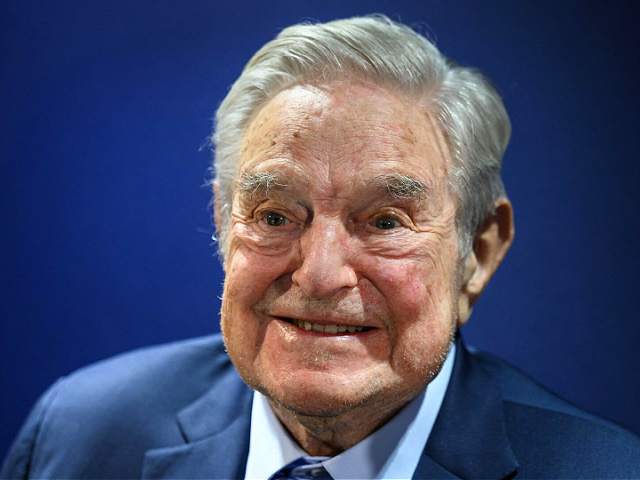 Hungarian-born U.S. investor George Soros smiles after delivering a speech on the sidelines of the World Economic Forum annual meeting in Davos on May 24, 2022. (Photo by FABRICE COFFRINI/AFP via Getty Images)

The organization’s “values” page indicates that they support the decriminalization of prostitution.

While one grant was intended “to provide general support,” another went to support SWOP’s attempt “to reduce the stigma and dehumanization associated with sex work and to increase power and collaboration among sex workers.”

The organization published a guide on “How to Be an Ally to Sex Workers.” The guide includes a number of suggestions, all of which are intended to normalize prostitution.

Business owners were told to “Put up sex-work-positive signs in your window,” while those in hiring or admission roles were instructed to “Ignore prostitution, drug, and non-violent convictions or arrests when they appear on applicant background checks.”

Meanwhile, the guide told policymakers to “Work to eliminate policies/laws that discriminate against individuals currently or previously involved in the sex trade.”

SWOP, which has also received monetary support from Neo Philanthropy and the Comer Family Foundation, is just one organization that works to normalize prostitution and has received support from OSF.

The fund calls itself “the first global fund guided by and for sex workers. Launched in 2012, Red Umbrella Fund joins together funders and sex workers in support of the human rights of sex workers.”

The organization articulates its agenda by saying, “We oppose criminalization and all forms of stigma and discrimination against sex workers. We recognize that sex work is work, RUF’s website reads.”

The OSF has also given two grants totaling $134,987 to the Red Umbrella Worker’s Collective. One grant of $49,987 went to “changing the narrative on sex work through video advocacy,” while one for $85,000 was dedicated to a project called “Revolting Prostitutes with the Sex Workers Advocacy and Resistance Movement.”

Even this, however, is just a small snapshot of the OSF’s continued support of the legalization and destigmatization of prostitution. The Soros-backed fund gave just under $150,000 to Yale University, with the grant intended “to support policy advocacy on diversion programs and decriminalization of sex work.”

A search for grants on the OSF website for the term “sex work” yields over 30 results, including organizations in the United States, Denmark, Germany, Norway, and the United Kingdom.

It goes on to argue “Laws against sex work intrude into private sexual behaviors and constitute a form of state control over the bodies of women and LGBTI persons who make up a large majority of sex workers worldwide.”