Baltimore Orioles center fielder Adam Jones set the sports world on fire Monday night when he told the media that fans at Fenway Park had called him the n-word “a handful of times,” and that one fan in particular had thrown a bag of peanuts at him.

Reaction to Jones story dominated the sports world Tuesday, even causing some pundits to demand the public outing of the fan who hurled the racial slurs.

However, for one media member, Adam Jones word alone isn’t enough to prove that any of this actually happened.

Albert Breer, who writes for the Monday Morning Quarterback and hails from the Boston-area, took to Twitter to ask for proof of Jones claims:

Is it horrible to want some proof? I dunno. I’ve probably been to 200 games at Fenway in my life. Never heard a slur yelled at a player. https://t.co/Nq29ijPrzy

ESPN’s Bomani Jones then went after Breer, challenging the notion that any proof should be required: 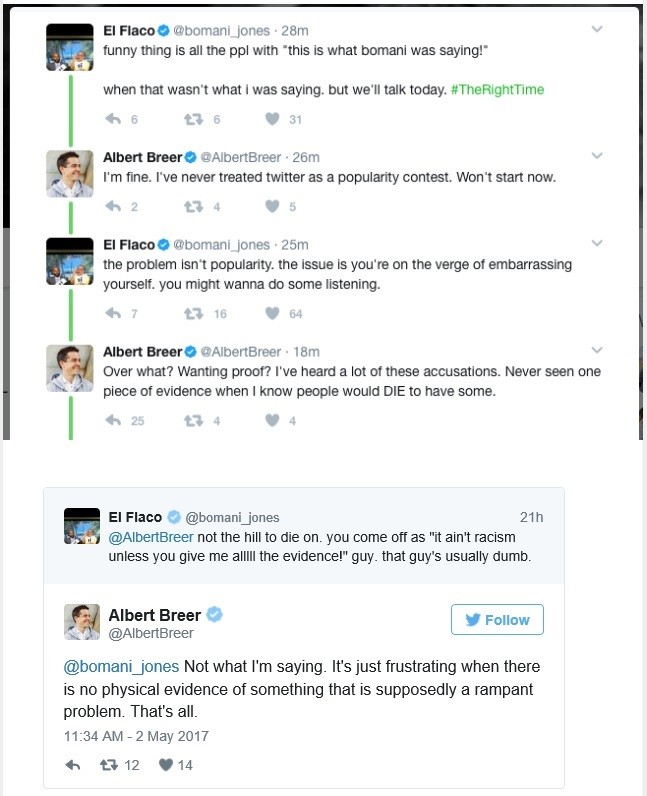 Bomani’s nonchalance when it comes to providing proof of something should surprise no one, considering that he was one of the loudest, most accusatory voices against the Duke Lacrosse players, even after the evidence against the players unraveled. To Bomani, proof, or the absence of proof, should never stand in the way of doing that thing which he loves to do most, which is to play the race card.

Nor, would one ever need more proof that “journalists” like Bomani are in fact not journalists at all. Here you have Breer, merely asking for evidence of Adam Jones claims, the asking of which should be the first and immediate object of any journalist on any story. Yet, Bomani mocks Breer for even deigning to question Adam Jones claim.

Why? Because this story has to do with race, particularly racial attacks by a white crowd against an African-American baseball player. Blacks are a minority within a minority in Major League Baseball, to the point where only 62 American-born black players remain in the league. This story lines up perfectly with the desire of the leftists in the sports media, and Adam Jones himself, to prove that baseball is a “white man’s game,” and that its culture has not only forgotten black people, but is actually hostile towards black people.

But hey, maybe things did truly go down like Adam Jones said. After all, the mayor of Boston and the Boston Red Sox themselves apologized for the incident. Though, doesn’t it seem odd, in this day and age, that fans could engage in the rampant racial slurring and peanut-throwing of a major-league player, and not one spectator turned on their phones and started videoing while it was happening?

Then again, maybe someone did and it just hasn’t come to light yet. Either way, it’s perfectly reasonable to ask for proof.

Whether this incident actually happened is important. Yet, what’s more important, and terrifying, is that no one in the media feels the need to prove that it actually did.