Fans hoping to see LeBron James face off against the Sacramento Kings on Tuesday were left wanting when the NBA announced the star Laker had entered “health and safety protocols.”

Several sources told ESPN that James will “miss several games” with the Los Angeles Lakers due to the protocols, which may or may not have stemmed from a positive coronavirus test. The exact cause of James’s removal was not made known. According to current NBA mandates, a player must isolate for ten days if they test positive for the coronavirus.

“After that period, a player must undergo a cardiac screening and reconditioning in order to be cleared to return to the court,” noted ESPN. “A player who tests positive could also clear protocol by returning two negative PCR tests within a 24-hour period.”

LeBron James — who the Lakers are listing in health and safety protocols — is expected to miss several games, source tells ESPN. Players with positive Covid cases must be out a minimum of 10 days.

This past September, LeBron claimed he was vaccinated from the coronavirus; however, as the New York Times noted at the time, he previously evaded several questions about his vaccination status and did not say which vaccine he received or the exact number of shots.

“I think everyone has their own choice to do what they feel is right for themselves and their family,” James said. “I know that I was very skeptical about it all, but after doing my research and things of that nature, I felt like it was best suited for not only me but for my family and my friends, and that’s why I decided to do it.”

James also said he would not use his massive platform to promote the vaccines.

“We’re talking about individuals’ bodies,” he said. “We’re not talking about something that’s political or racism or police brutality and things of that nature.”

“So I don’t feel like for me personally that I should get involved in what other people should do for their bodies and their livelihoods,” he added. 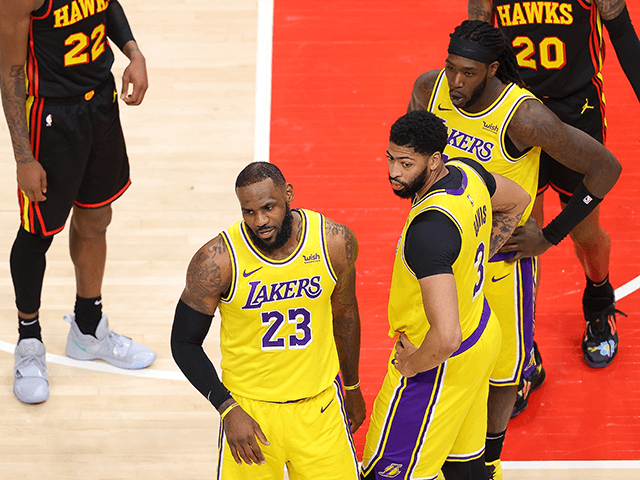 LeBron James #23 of the Los Angeles Lakers reacts to a fan courtside during the second half against the Atlanta Hawks at State Farm Arena on February 01, 2021, in Atlanta, Georgia. (Photo by Kevin C. Cox/Getty Images)

“Obviously it’s a huge loss,” Vogel said prior to Tuesday’s game. “It’s disappointing. We just want the best for him right now. That’s where our thoughts are. And we have a next-man-up mindset.”

Vogel said he arranged for James to travel from Sacramento back to Los Angeles as of Tuesday. His absence comes after he “missed 11 of the Lakers’ 22 games coming into Tuesday because of injuries and a suspension,” according to ESPN.

“We know he wants to be in there every night,” Vogel said. “More than anybody in the league, probably.”

Vogel added that he has spoken with Lakers vice president of basketball operations and general manager Rob Pelinka about recommending coronavirus booster shots for players.

“We met early in the season or right around the day or two of that recommendation,” Vogel said. “Just to encourage and recommend the booster shot and the values that come with it.”