The NFL has talked about wanting to improve relations between the community and the police. Though, they might want to start with their own players.

Seahawks quarterback Geno Smith allegedly told a police officer that he had a “little d*ck” during a DUI arrest Monday morning.

Smith was pulled over for speeding in King Count, Wash., early Monday morning and spent about 7.5 hours in jail.

Smith was reportedly driving 96 miles per hour in a 60 mph zone in his Rolls Royce. Police documents said he drove erratically, smelled of booze and told them he drank wine before driving.

Smith was transported back to the police station after allegedly becoming belligerent with the officers. According to arrest documents obtained by TMZ, it was there that Smith told the officer he had a “little d*ck.” 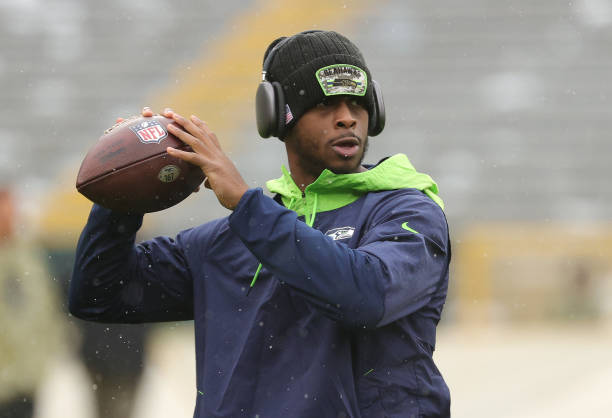 GREEN BAY, WISCONSIN – NOVEMBER 14: Geno Smith #7 of the Seattle Seahawks warms up before the game against the Green Bay Packers at Lambeau Field on November 14, 2021 in Green Bay, Wisconsin. (Photo by Stacy Revere/Getty Images)

The backup Seattle signal-caller reportedly threatened officers at the scene after refusing blood tests and a breathalyzer.

Smith told his followers on Twitter to be patient and keep an open mind.

Being arrested brings a taint onto the reputation that is impossible to undo, no matter what really happened.
I’m asking all of you to hold back on judging me the same as you would do for a friend or family member.
I’ll have more to say down the road
& ask that you bare with me.

Smith’s Attorney Jon Fox pleaded for the public to have an “open mind” towards his client while stressing that Smith is cooperating with the investigation.

“Geno is fully cooperative with the investigation,” Fox told the AP in a statement on Monday. “I hope that an open mind can be kept by all as the facts are ascertained.”

Geno Smith has just completed his eighth year in the NFL and his second as a backup with the Seahawks.