“Putin, at the invitation of Chinese President Xi Jinping, will visit Beijing on February 4 and will be present at the opening ceremony of the Winter Olympic Games the same day, and the two leaders will hold in-depth talks covering a wide range of bilateral and international issues,” the newspaper reported on February 3.

“Putin is the first foreign head of state who confirmed his presence at the 2022 Games last year,” the Global Times noted, adding, “Chinese experts consider him as the most important guest to the event, given there’s no limit for China-Russia friendship, and two leaders will discuss how to build up the two countries’ strong partnership.”

Russia is currently prohibited from allowing its athletes to participate in any Olympic event according to the terms of a punishment issued by WADA in December 2019 for alleged doping incidents involving Russian athletes in previous years. 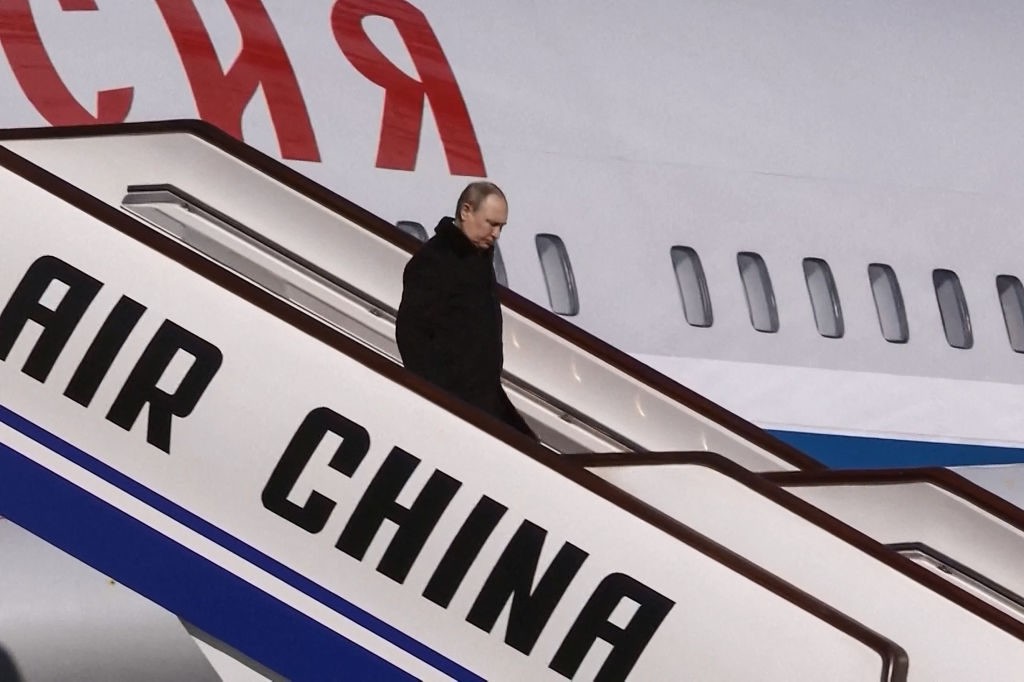 This screengrab taken from video by state broadcaster China Central Television (CCTV) via AFPTV shows Russia’s President Vladimir Putin disembarking upon his arrival in Beijing on February 4, 2022, ahead of his meeting with China’s president and the opening ceremony of the 2022 Winter Olympic Games. (STR/AFPTV/AFP via Getty Images)

“Russia will not be permitted to participate in, bid for or host any covered event, including two editions of the Olympic and Paralympic Games and many other major events, for the next two years,” WADA reiterated on December 17, 2020, after initially announcing the same ban one year earlier.

Russian athletes are still participating in the Games, however, as part of the Russian Olympic Committee (ROC), but cannot fly the country’s flag.

Beijing will host the 2022 Winter Olympics from February 4 through February 20. Putin’s attendance of the event’s opening ceremony on Friday will mark his first visit to China in nearly three years.

Xinhua published a personal statement from Putin on February 3. The Russian president said he and Xi “will thoroughly discuss key issues on the bilateral, regional, and global agendas” during their upcoming talks and described Sino-Russian relations as “entering a new era” of “unprecedented” cooperation.

“The development of business ties will certainly be given special attention,” Putin revealed.

He specifically mentioned “the construction of four new power units at Chinese nuclear power plants with the participation of  Rosatom State Corporation [that] launched last year” as an example of Beijing and Moscow’s growing economic coordination.