Former Congresswoman Tulsi Gabbard tweeted on Sunday about how forcing biological women to compete with biological men who “identify” as women in sports is not only hurting female athletes as competitors but also threatens their safety and well-being.

“Denying the biological differences between men and women not only threatens women’s rights, it threatens our safety,” Gabbard tweeted. “Not only are we shutting women out of competitive sports, we are also shaming girls into silence in the face of abuse and harassment.”

Denying the biological differences between men and women not only threatens women's rights, it threatens our safety. Not only are we shutting women out of competitive sports, we are also shaming girls into silence in the face of abuse and harassment. pic.twitter.com/dJHgCboH3m

Gabbard also spoke about how the success of Title IX – designed to prevent discrimination against female students because of their sex – is also threatened on its 50th anniversary.

Gabbard attended a rally in Washington, DC, made up of female athletes protesting transgender competition and was interviewed by Greta Van Susteren about the event.

“The 50th anniversary of Title Nine really highlights the incredible opportunities and progress that have been made over the last 50 years,” Gabbard said. “And so when you see actions like those taken by the Biden administration today, and a lot of the changes that we’ve seen that are essentially pointing to the erasure of women, both through actions like hey, we’re not going to call use the word mother, or father in legislative language, we’re not going to say a mother. We’re going to call someone a birthing person.

“And then you see the Biden administration really rejecting the objective reality that there are biological differences between a man and a woman of male and a female,” Gabbard said, adding that she wants to stand with female “brave athletes” and speak out against the Biden Administration and others who are “hurting girls and women.”

Gabbard said she had spoken to protestors, and transgender swimmer Lia Thomas was a common theme of the group. 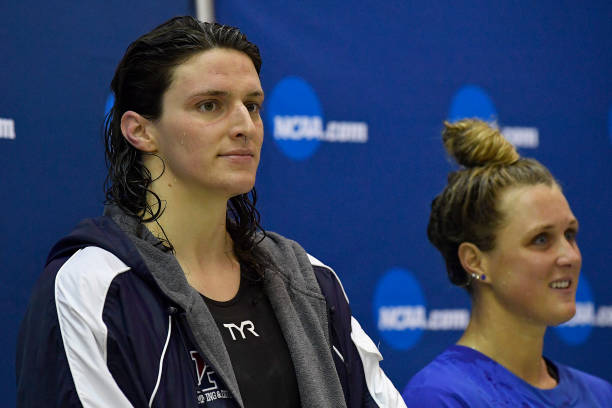 Lia Thomas looks on from the podium after finishing fifth in the 200 Yard Freestyle during the 2022 NCAA Division I Women’s Swimming & Diving Championship at the McAuley Aquatic Center on the campus of the Georgia Institute of Technology on March 18, 2022, in Atlanta, Georgia. (Mike Comer/NCAA Photos via Getty Images)

“In the in the women’s locker room Lia Thomas was exposing male genitalia and boasting about how [he is] still dating women and going out with women and these girls felt sexually harassed and threatened, and went and reported to their administrators and were told to be silent,” Gabbard said.

Gabbard said “weak leaders in Washington” are not standing up for women today and future generations of women who need their rights and safety protected.