The worst video game journalism on planet Earth is published by Gawker, on its Kotaku gaming vertical.

This week, resident brainiac Nathan Grayson of “I slept with Zoe Quinn and didn’t disclose that I’m in the credits of her game even though I mentioned it approvingly in my copy” fame decided that Steam Curators, a system whereby members of the Steam community can assemble lists of their favourite games, was bad because “anyone” can make lists and, oh no! sometimes people like to take the mickey and make jokes.

Gosh, a system where just anyone can decide what games are good. We can’t have that.

Anyway, since Kotaku has come out against Steam Curators – despite, obviously, maintaining a list itself – I felt I had no option but to try the system out. Therefore please do join me over at Steam where I’ve put together a list of my favourite games with a few reasons why I like them. 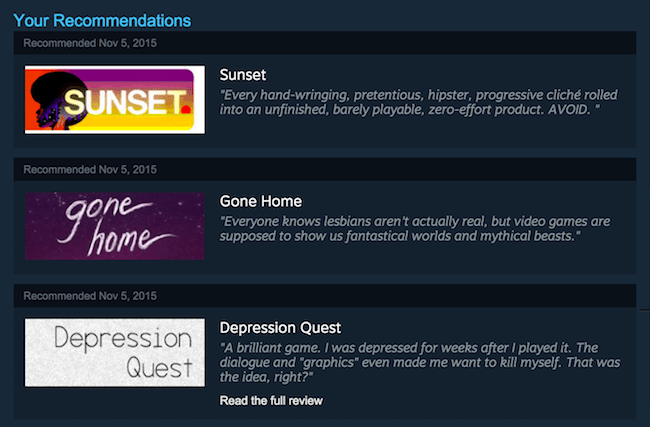 Kotaku appeals to social justice warriors and other journalists but ordinary gamers loathe the site and don’t trust its recommendations because everything it does is saturated with dreary authoritarian hand-wringing about diversity quotas and “offensiveness.” It’s not that they’re always wrong about everything. They’re just no fun.

It would of course be just terrible if disreputable internet trolls somehow spread my list and made it more popular than, say, Kotaku’s. But you can’t blame me for the sins of others.