A growing university poster campaign is asking Christian students to check their privilege. Although the campaign originated out of the University of San Francisco, the message has now created backlash with students across the country after the posters went viral on social media networks like Tumblr and Facebook.

Although the architects behind the campaign contend that the posters weren’t intended to shame those with “privilege,” students at Virginia Tech, Oregon University, and the University of San Francisco have complained that the posters are dividing students more than they are bringing them together. 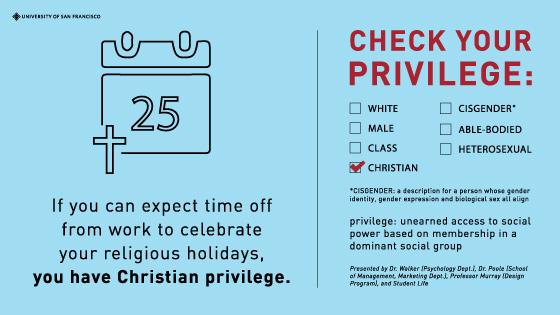 “Today, I was diagnosed with privilege. Symptoms: white, Christian, straight, ‘cisgender,’ and able bodied,” a conservative student activist at Virginia tech wrote. “Virginia Tech deciding who does and does not have privilege is not okay. Going up to a sign and reading that you should ‘check your privilege’ just because of the situations you were born into, and paths you have chosen for your life, is categorizing and dividing people further.”

Southern Oregon University student and U.S. Marine Corps veteran Tim Short made clear that he feels the posters do more harm than good, stating his belief that the posters “are segregating and dividing the population by targeting certain groups.”

According to the campaign’s website, the mission of the posters is to “begin the discussion around privilege and social inequalities in an effort to raise critical awareness of the institutional oppression often seen in the United States of America.” Social justice activists at the Jesuit-led University of San Francisco define privilege as “unearned access to social power based on membership in a dominant social group.”

The posters list several categories of privilege but puts an emphasis on “Christian privilege,” which it defines with the phrase: “if you can expect time off from work to celebrate your religious holidays, you have Christian privilege.” According to the organizers, the posters went viral on social media sites like Tumblr and Facebook, which has brought the campaign to various campuses around the country.

Although the posters suggests that Christians receive an assortment of unearned advantages, there has been much evidence to suggest that university faculty are often hostile to Christian students and their perspectives. The 2014 film, God’s Not Dead, resonated with Christians with its story of a philosophy professor who coerced his students into concluding that “God is dead.”

Not only have faculty been accused of treating Christians unfairly, but university administrators have allegedly engaged in discriminatory practices as well. In 2015, National Review columnist David French detailed his experience with the university practice of “ideological cleansing,” which he claimed almost cost a Christian applicant a spot on the faculty at Cornell Law School: “the committee almost rejected an extraordinarily qualified applicant because of his obvious Christian faith (he’d attended a Christian college, a conservative seminary, and worked for religious conservative causes). In writing, committee members questioned whether they wanted his “Bible-thumping” or “God-squadding” on campus.”

Tom Ciccotta writes about Free Speech, Intellectual Diversity, and Social Justice for Breitbart. You can follow him on Twitter @tciccotta or on Facebook. You can email him at tciccotta@breitbart.com