Wikipedia bills itself as “the free encyclopedia that anyone can edit.” In reality, it’s a bureaucratic mess dominated by a small clique of established editors who exploit their position to bully, smear, and intimidate anyone who challenges their authority.

Their latest target is David Auerbach, a highly regarded technology columnist for Slate and a fellow at the New America Foundation. Auerbach has been in the editors’ crosshairs ever since he wrote a series of damning exposes of Wikipedia’s bureaucratic elite in 2014.

In one of these columns, Auerbach described how the Wikipedian aristocracy maintain their power.

As it turned out, I’d run into a couple of what one Wikipedia administrator terms “The Unblockables,” a class of abrasive editors who can get away with murder because they have enough of a fan club within Wikipedia, so any complaint made against them would be met with hostility and opprobrium.

Longtime editors, wrote Auerbach, “have developed a fortress mentality in which they see new editors as dangerous intruders who will wreck their beautiful encyclopedia.” According to Auerbach, the combination of hostility to new editors, and the precipitous drop in longstanding ones (MIT Tech Review counted only 31,000 active editors in 2013, compared to a peak of 51,000 in 2007) “increases pressure to retain other long-standing editors, even incredibly acerbic ones, reinforcing the fortress mentality.”

Previously, Auerbach’s opponents targeted him on Wikipedia, attempting to smear him in public articles, and  have his own page deleted — both favorite tactics of editors looking to damage someone’s public image. Although those efforts failed, Auerbach’s opponents — who hold senior positions in the Wikimedia Foundation’s DC outreach unit — are now targeting his job.

Robert Fernandez, a member of Wikimedia DC’s Board of Directors and Audit committee, who goes by the pseudonym “Gamaliel” on Wikipedia, was the primary culprit, accusing Auerbach of being “pro-Brexit, pro-GamerGate” and “anti-SJW,” as well as a “libel machine.”

Fernandez, a well-known social justice warrior himself, went on to insinuate that Auerbach’s thoughtcrimes were severe enough to warrant a sacking. 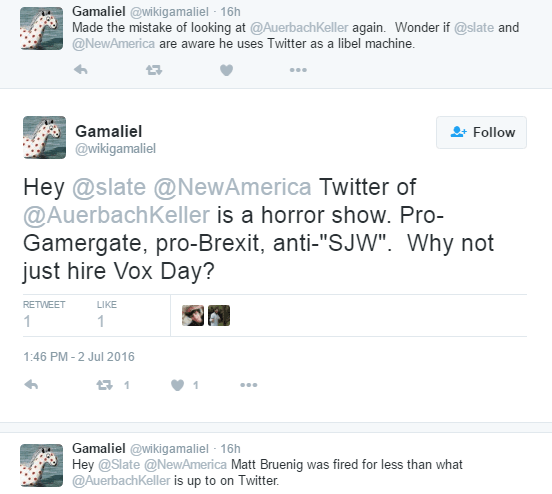 Auerbach, a liberal, has repeatedly made it clear that he is neither pro-Brexit nor pro-GamerGate. He has, however, criticised opponents of both for employing counterproductive rhetoric. In particular, he’s attacked anti-GamerGate journalists for showing contempt for their own audience and anti-Brexiters for showing contempt for democracy. Auerbach’s view is that both methods only serve to alienate observers and drive more support to both camps. 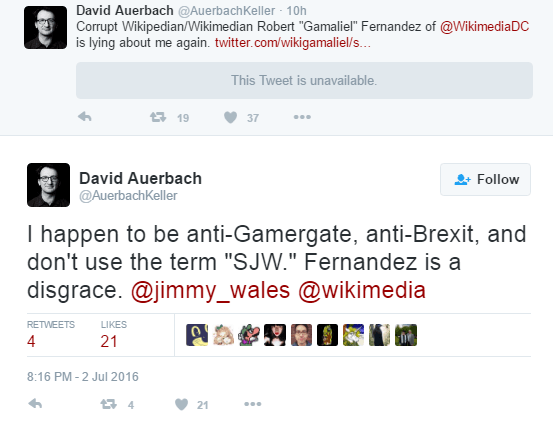 But, according to Fernandez, Auerbach’s pragmatic liberalism is enough to place him in the same camp as Vox Day, a champion of the alternative right.

When Auerbach attempted to rebut Fernandez’s smears, another Wikipedian, Adam Hyland, stepped in to accuse him of “harassing a private citizen.” Like Fernandez, Hyland tagged Auerbach’s employers — another direct attempt to damage Auerbach’s career. 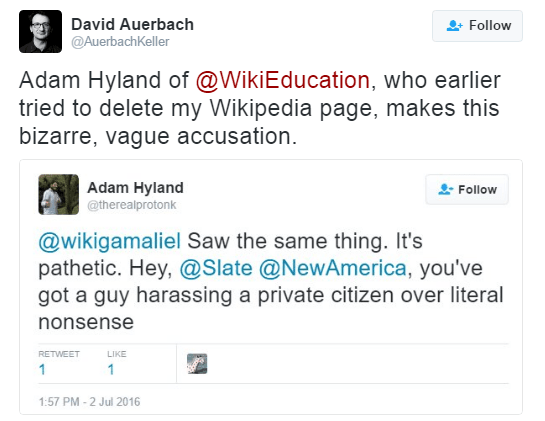 Auerbach then attempted to reach out to other board members of Wikimedia DC and Wikipedia’s Arbitration Committee to ascertain whether the organization stood behind Fernandez’s behaviour. He received no reply via email, and public rebuffs via Twitter. Bizarrely, one Arbitration Committee member refused to “give comment on demand” and then added that she would not do “unpaid labour.”

Breitbart Tech has also reached out to Wikimedia DC. Like Auerbach, we received no response.

As Auerbach is a fellow Wikipedia editor, Gamaliel’s behavior likely violates the site’s broad-ranging ban on “off-site harassment,” which prohibits editors from pursuing vendettas against their peers, even outside the confines of the online encyclopedia.

Wikipedia’s definition of harassment is broad-ranging, covering all behavior intended to “make the target feel threatened or intimidated, and the outcome may be to make editing Wikipedia unpleasant for the target, to undermine, frighten, or discourage them from editing.”

It’s hard to see how a Wikipedian threatening the job of a fellow editor because they found said editor’s opinions to be disagreeable wouldn’t fall under the site’s definition of harassment. Yet when Breitbart Tech reached out to the Arbitration Committee, which has the power to enforce the site’s rules and sanction rogue editors, we received no response.

This should ring alarm bells with neutral observers, as the Arbitration Committee has in the recent past been highly strict in enforcing its harassment policy. Last year, they were embroiled in controversy after they sanctioned a longstanding editor for offsite harassment while refusing to provide the public with evidence of the alleged harassment, or allowing the editor to defend himself.

It’s worth noting that the editor in question, like Auerbach, took a far more moderate approach towards topics like GamerGate than Fernandez and other social justice-inclined editors.

The editor, who goes by the pseudonym “The Devil’s Advocate,” was, initially, not even told what he had done to merit sanction.

Months later, following media and community pressure, the editor was presented with the extraordinary news that he had been sanctioned because he warned a Wikipedia admin that, in his view, they had engaged in a conflict of interest and may have to be reported to the Arbitration Committee. Once The Devil’s Advocate carried out his warning and filed a report, proceedings were launched against him, resulting in his ban.

In other words, merely alleging that one of Wikipedia’s untouchable elites had engaged in wrongdoing was enough to get The Devil’s Advocate sanctioned.

“If they think what I did was harassment, then they really can’t argue that Gamaliel’s actions didn’t fall under the harassment policy” said The Devil’s Advocate in a comment to Breitbart Tech.

The Arbitration Committee have yet to initiate proceedings against Fernandez for his aggressive, threatening behavior on social media. Yet The Devil’s Advocate was banned simply for filing a conflict-of-interest complaint via the proper channels. The double standards are breathtaking.

Still, isn’t that the story of all systems dominated by unaccountable elites? It’s one set of rules for the clique, and another for everyone else.