There have been widespread reports that Brian Niemeier, a Hugo Award-nominated sci-fi author, has been “shadowbanned” on Twitter, with his tweets no longer appearing in peoples’ notifications or feeds.

According to Niemeier, his followers are reporting that “they aren’t getting notifications when I retweet or reply to them. People also aren’t being notified when I follow them.” One user also reported that “he can’t even follow conversations since my tweets don’t show up.”

Niemeier agreed to carry out a test, in which I tweeted him to see if his replies showed up on my feed or in my notifications. They didn’t. Instead, I could only view the author’s replies to my tweet by navigating to his profile and scrolling down his feed.

My own tweet, below, should be followed by a reply from Niemeier. But the reply is hidden. 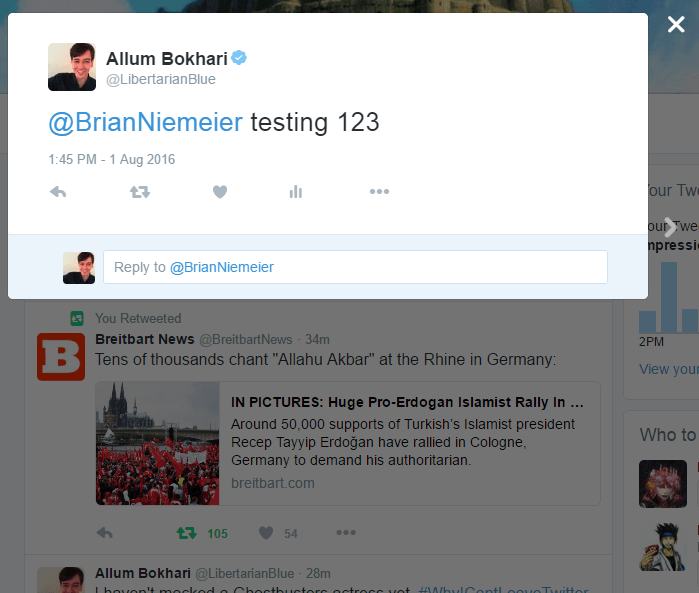 After Niemeier replied to my tweet, I checked my notifications to see if his reply would appear there instead. Once again, it didn’t. The following screenshot, taken 10 minutes after Niemeier replies, shows no sign of the author’s tweet.

Nor could Niemeier’s reply be seen in my “mentions” tab.

The only way to view Niemeier’s response was to manually navigate to his own Twitter feed and scroll down. Other users reported the same problem.

The problems with the sci-fi author’s tweets instantly attracted suspicion, as Niemeier is a supporter of the “Sad Puppies” slate, a nominating bloc in the annual sci-fi Hugo Awards aimed at combating political homogeneity in the award nominations. The Sad Puppies are regularly accused of being a conservative campaign (they deny this, claiming that nominating high-quality authors is their only goal), and have attracted the wrath of the web’s left-wing social justice warriors.

The mysterious disappearance of an author’s tweets, especially an author affiliated with the Sad Puppies, is another source of concern for those worried about Twitter’s descent into partisan bias. With the recent suspension of Milo Yiannopoulos from the platform, and the campaign to get him reinstated, Twitter is now facing yet more allegations that it is censoring opponents of social justice warriors.