Facebook’s new fact-checking partner Snopes is almost solely staffed by left-wing employees, some of whom have compared Trump supporters to “ethno-nationalists,” claimed that racism against white people is not possible, and praised national bans on “ultra-thin models.”

Snopes fact-checker Arturo R. Garcia, who also writes for Raw Story and works as the Editor-at-Large of “Racialicious”– “A blog about the intersection of race and culture” — labels himself a “progressive” in his Twitter bio and frequently engages in left-wing commentary while also determining what’s true or false at the “neutral” Snopes.

Quoting a tweet from an account which read “Ethno-populist Trump TV, coming soon to racists near you,” Garcia added, “I guess they finally got their White Entertainment Television”.

I guess they finally got their White Entertainment Television. https://t.co/cjmq9Etwwh

In other tweets, Garcia often attempted to portray Trump supporters in a negative light, while he also made numerous racially-provocative comments.

White colleague: Two people stopped me to ask if I'm from California.
Me: I like this town. The white people get profiled!

I dunno, might have to create more white folks in the comics to have enough content https://t.co/ydIkeEOt2b

Why is @YouTube supporting a right-wing fringe radio host against @RightWingWatch? http://t.co/ug7BNpl5y7

Nearly all of the content retweeted by Garcia was also either left-wing, racial, anti-Trump, or social justice-related.

As pointed out by the Daily Caller, one of Garcia’s most recent articles at Raw Story is titled “The next time your right-wing uncle tries to ruin the holidays with ‘proof’ of creationism, show him these videos.”

Garcia also frequently writes positively about #BlackLivesMatter while attacking those who condemn it.

Some of Garcia’s previous articles within the last few months include: “GOP congressman tries to burn Kaepernick with NYC bombing tweet — but it backfires spectacularly“, “Trump revives creepy gun rhetoric against Clinton: Disarm her bodyguards — ‘let’s see what happens to her’“, “Internet mocks the Donald after disastrous Flint visit: ‘How about handing Trump a glass of Flint water?’“, “Stephen King compares Trump to Cthulhu — and now Cthulhu is pissed“, and “WATCH: Trump fan caught on video punching and slapping protesters — and getting away with it”

Despite his obvious and self-proclaimed political biases, Garcia has fact-checked numerous comments by Donald Trump and Mike Pence, while providing leading political coverage during the election.

Garcia, who could be instrumental in determining what news outlets are “fake” or not on Facebook, has also repeatedly attacked Breitbart News. He also currently misattributes a quote to Breitbart in his Twitter bio. 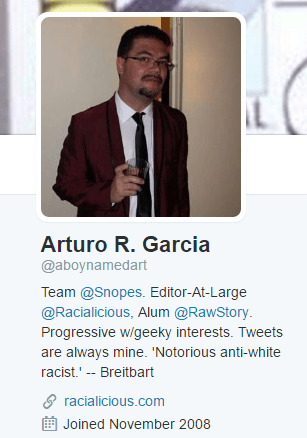