A professor at the University of Delaware has come under fire for arguing that Otto Warmbier, who passed away last week after being imprisoned by the North Korean government for over a year, deserved his fate because he was an affluent white male.

“Is it wrong of me to think that Otto Warmbier got exactly what he deserved?” University of Delaware Professor Katherine Dettwyler wrote on her Facebook page and in the comments section of a National Review article on the left’s reaction to Warmbier’s death. “He went to North Korea, for f*ck’s sake, and then acted like a spoiled, naive, arrogant US college student who had never had to face the consequences of his actions. I see him crying at his sentencing hearing and think ‘What did you expect?'” 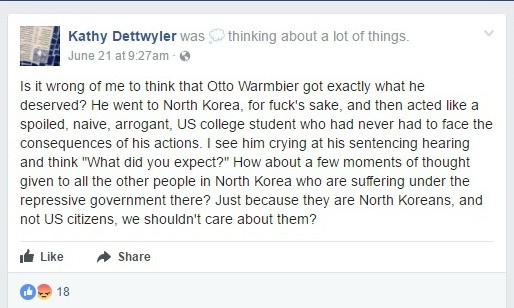 Dettwyler, a professor of anthropology at the university, made the posts on Wednesday, just two days following Warmbier’s death.

Warmbier was transferred back to the United States in a coma after having been detained by the regime for nearly 18 months. He passed away six days after his return to the United States. Several U.S. officials blamed North Korea for Warmbier’s death. “Countless innocent men and women have died at the hands of North Korea…, but the singular case of Otto Warmbier touches the American heart like no other,” said Nikki Haley, the U.S. ambassador to the U.N.

Dettwyler drew a parallel between Warmbier’s alleged stealing of a propaganda poster with “white males routinely [getting] away with raping women” in the United States. This comparison served as a suggestion that he had been conditioned to act recklessly by the society in which he grew up and that for the alleged crime of stealing a poster, Otto Warmbier deserved his fate.