Ubisoft’s latest outing in their science-fiction alternate history franchise is a decent action RPG — but not a very good Assassin’s Creed game.

As the tenth main-line release in a franchise that has been just as loved as hated by its fans, Assassin’s Creed: Origins was meant to renew confidence in a franchise that had been steadily flagging since the demise of the second most beloved Italian in video games, Ezio Auditore. After a year’s hiatus following a series of releases that beat their cash cow within an inch of its life, Origins is supposed to be a reinvigorating return to form. And while Origins hits a lot of the right notes, its quest to be different from its predecessors has ended with a decent game that is Assassin’s Creed in name only.

Yes, Assassins Creed: Origins is still an open world science-fiction fantasy rooted loosely in world history and anchored to its mechanics by mysterious ancient technology that is virtually indistinguishable from magic. It remains a third-person action/stealth playground in vast and meticulously rendered settings from around the world and across time. There is a token modern element, replete with high-level conspiracies by shadowy organizations. But these recognizable features fail to mask what is essentially an action role-playing game in Assassins’ clothing. 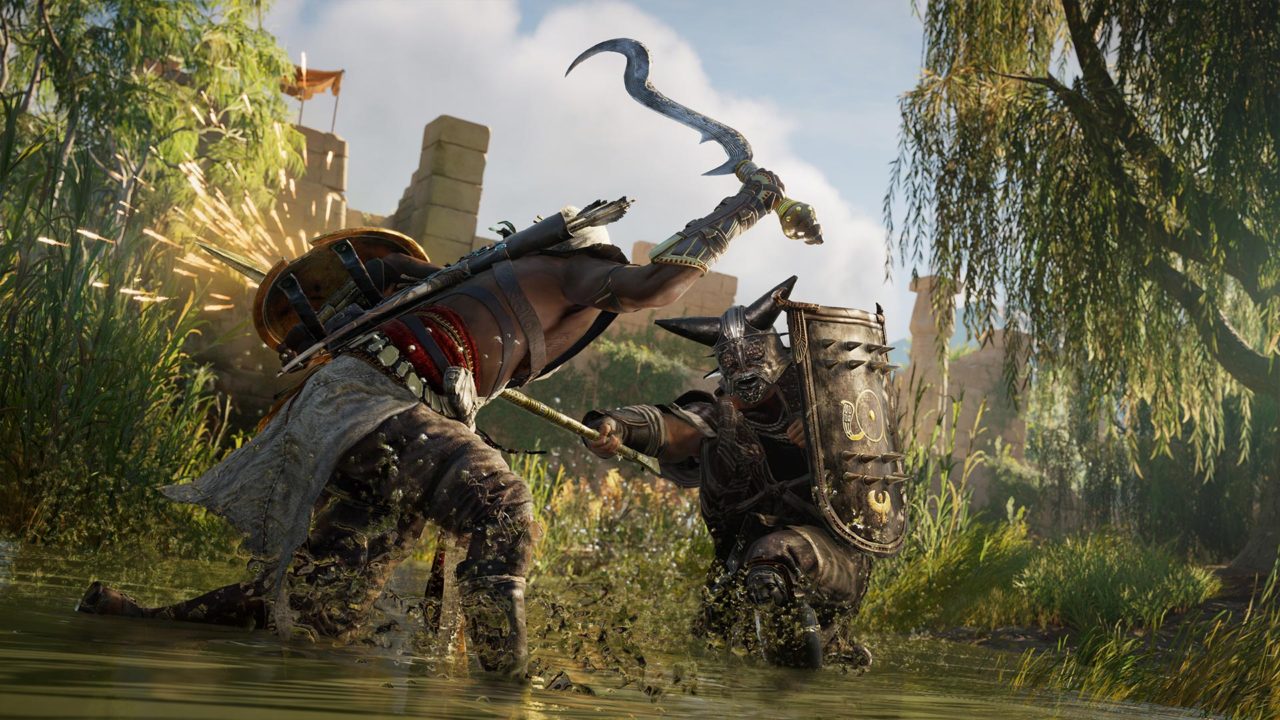 That isn’t to say that Origins is a bad game — far from it. For the first time in years, there were times in which I actively enjoyed moving around in the world. The setting of Egypt is vast and beautiful and a consistent delight to explore. You play Bayek of Siwa, Egyptian Medjay and perhaps the most interesting and charismatic protagonist since Ezio himself. Bayek has far more years on him than most playable game characters outside of Solid Snake and wears them well. He has a defined personality, a meaningful role within the context of the world, and strong enough motivation for most of the many tasks he undertakes.

Bayek’s wife is an interesting character as well but relegated to the side where she would have been better involved as an alternate (or even co-op) player. Friends and enemies alike receive just enough character development to make you curious about them — which is why it is so unfortunate that none of them really get any time to shine. Despite the strength of its central character, storytelling is the first of Assassin’s Creed: Origins‘ missed opportunities. Bayek’s overarching story is a predictable tale of loss and vengeance that has been focus-tested into a finely honed — and thoroughly expressionless — sheen. 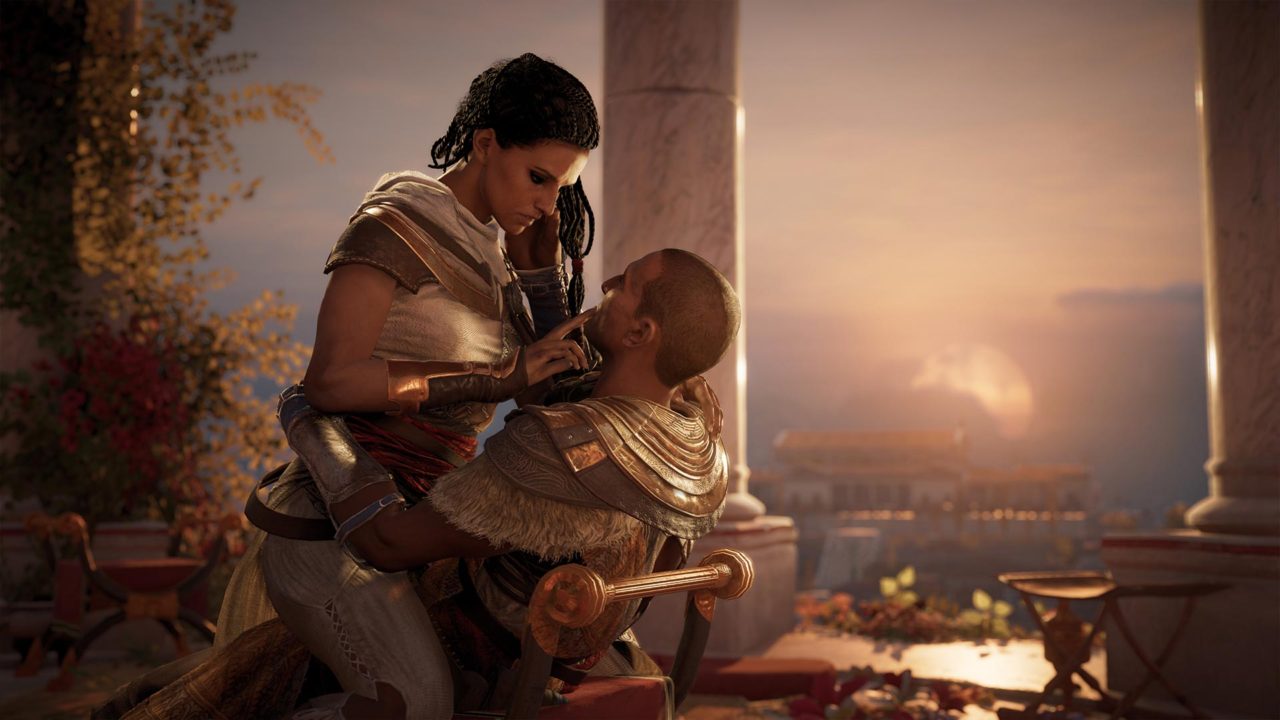 The second missed opportunity lies within the combat system itself, by far the biggest change that the franchise has ever seen. It feels as if the development team noticed the popularity of the Dark Souls series and decided to shoehorn its gameplay into the Assassin’s Creed franchise to see if it would spice things up without anyone in danger of being too creative. The result is a frantic hack-and-slash affair against enemies with bloated hitpoints who are all but invincible and capable of killing you in one or two hits if they outstrip your current level.

That’s right: This time around, you will need to level up your assassin if you want to assassinate anything. In fact, if you do not want to see simple city guards laugh away a thrust of your hidden blade through their skulls, you will have a lot of leveling, looting, and crafting to do. Leveling increases your health and damage, as well as granting skill points that you can use to gradually earn your abilities. The mass slaughter of clustered crowds of wildlife will improve your gear, because Ubisoft loves “hunting,” but only if it bears no resemblance to the real word. Instead, you hoof it toward another icon and slaughter a dozen animals milling in circles until you’ve killed the “boss” animal, and then the icon is cleared. That’s right, it’s Hunting™! 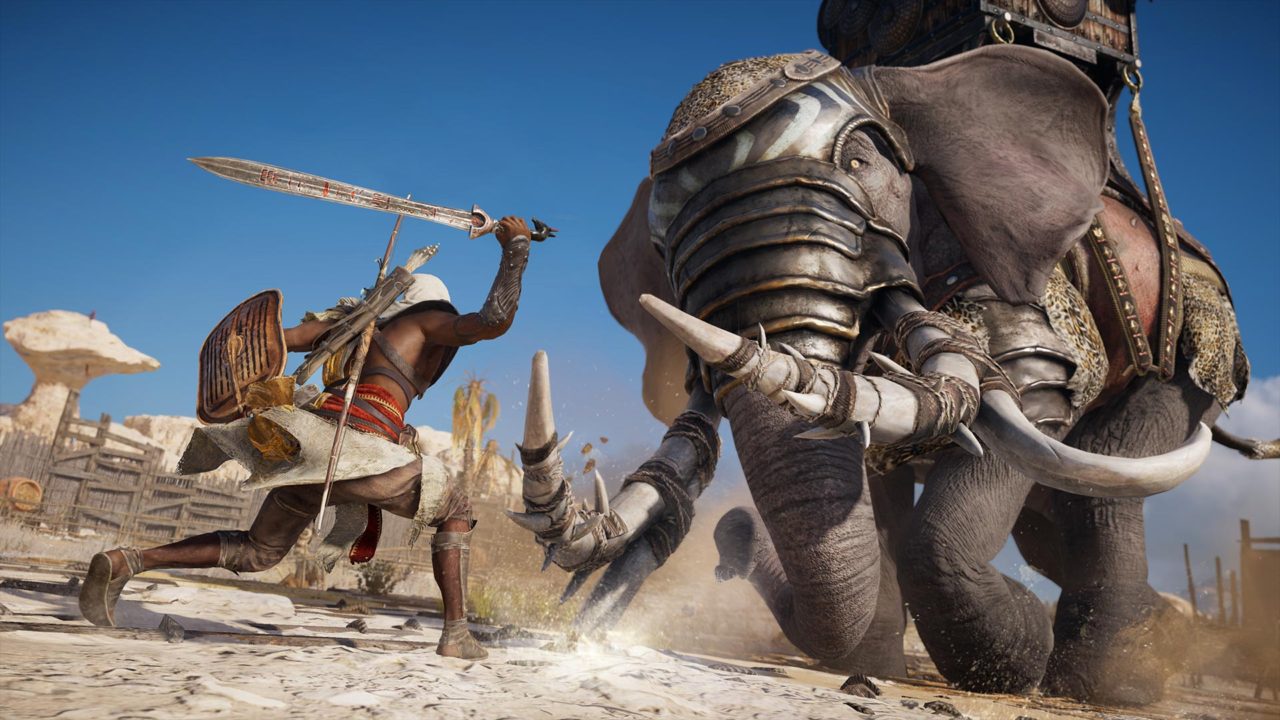 Enemies drop items of varying rarity, but even the highest rarities are so plentiful that anything less than legendary just isn’t worth leveling. Yes, you do have to level up the weapons as well. Keep looting those corpses! Leveling an item will require a lot of cash. Wander outside the areas current to the level of your character, your abilities, your weapons, and your gear, and the humblest city guard will eviscerate you as you flail wildly at them with all the deadly efficacy of a wet noodle.

And rather than assassinating anyone, you will inevitably spend the majority of your time in open combat. Stealth has become an afterthought in Origins; most areas are designed with only the barest measure of interesting ways with which to interact, more like Far Cry‘s outposts than the vertical acrobatic playgrounds of former titles in the Assassin’s Creed series. It is almost always more efficient to charge in than consider your surroundings. That said, carefully winding your way around in the shadows is certainly an option, albeit ineffective. There is no danger if you’re detected because you can so easily turn the world into your personal meat market. Assassins Creed: Origins is a game which embraces that grind. 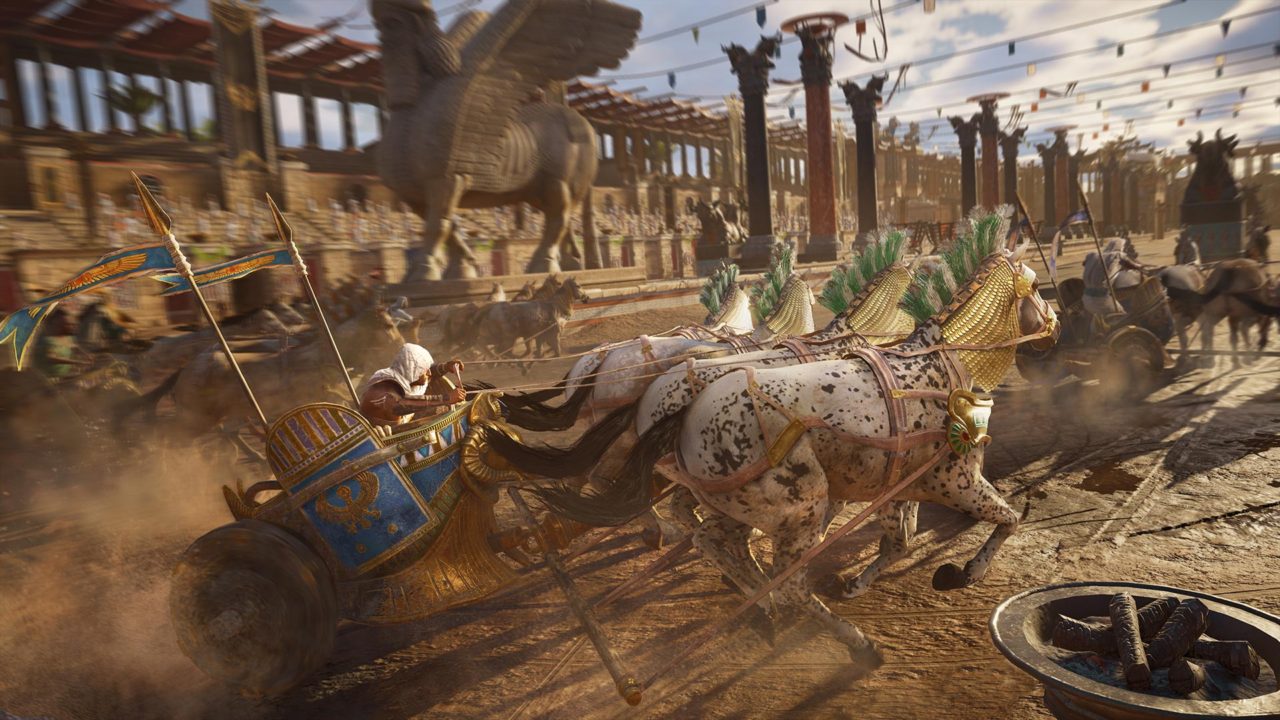 Side quests are typically mundane, but out of the dozens available I did find a handful that were interesting and well designed. There’s a lot of filler, but diamonds lurk in the proverbial rough. Ubisot has pulled from Dark Souls for the combat and The Witcher 3 for its investigations. But Bayek is not a witcher, and the investigations are almost never engaging enough to warrant the term. Activities like chariot racing aren’t as much fun as the developers seem to believe, but they are competent enough for a bite-sized experience. Arena bouts leverage the relatively solid open combat but represent more hacking and slashing in a game that revolves around that already.

But here’s the kicker: when it all works, it can be a lot of fun. The combat is tight, so long as you are in an appropriate area and current with your various power metrics. Bayek is cool, well-acted, and the world he inhabits is full of NPCs that seem significantly more lively than those that have come before. The weapons you find are varied and interesting, and their different effects can certainly encourage varying play styles within the game’s essential framework. It’s a shame the game would rather throw dozens of useless ones at you while you wait for a high-quality version of whatever weapon you prefer. There is plenty to enjoy, and I frequently did; but at every turn, the game is happy to stop just past the point of competence. 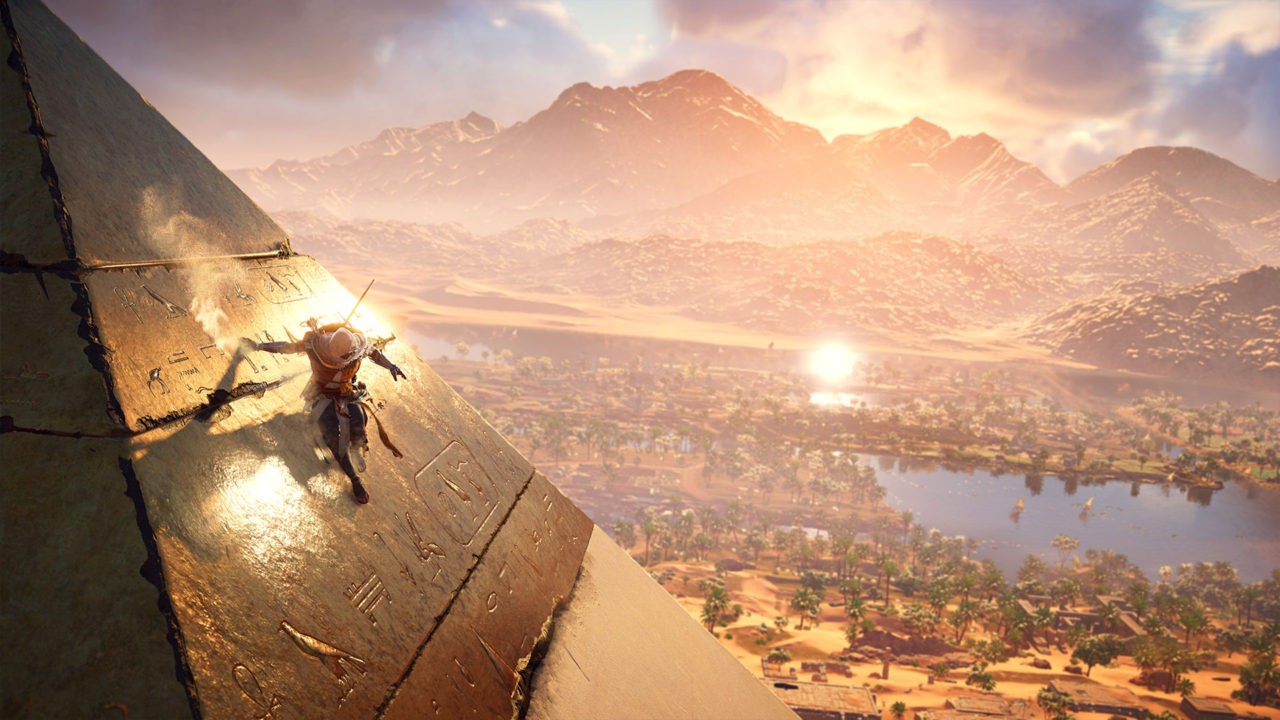 More than anything else, the “assassin” fantasy has been stripped away. By forcing you to gradually level your damage, and making enemies immune to your skills outside your level, Ubisoft has forsaken a cornerstone element of the series for the sake of another layer of progression mechanics. The eponymous assassins have always been compelling because they are so deadly; because no one is immune to their ancient arts, or the blade at their wrists. Ironically, it was 2014’s Assassin’s Creed Unity that came closest to fulfilling the vision of the early series, though it was mired in so many other problems that it was difficult to see. In Origins, you are a level [whatever] warrior. At no point are you much of an assassin. In fact, you are exactly the sort of bone-breaking thug at which descendant generations of the order would sneer.

I must, however, commend Ubisoft for finally giving up on the stints of abject misery that comprised the first-person interludes. The Desmond Approach is back, with a new character who seems almost as blank as the former, but is at least a step back in the right direction. Nevertheless, this is more a remedy to past mistakes than any sort of advancement, and our new Animus explorer never really gets their due. 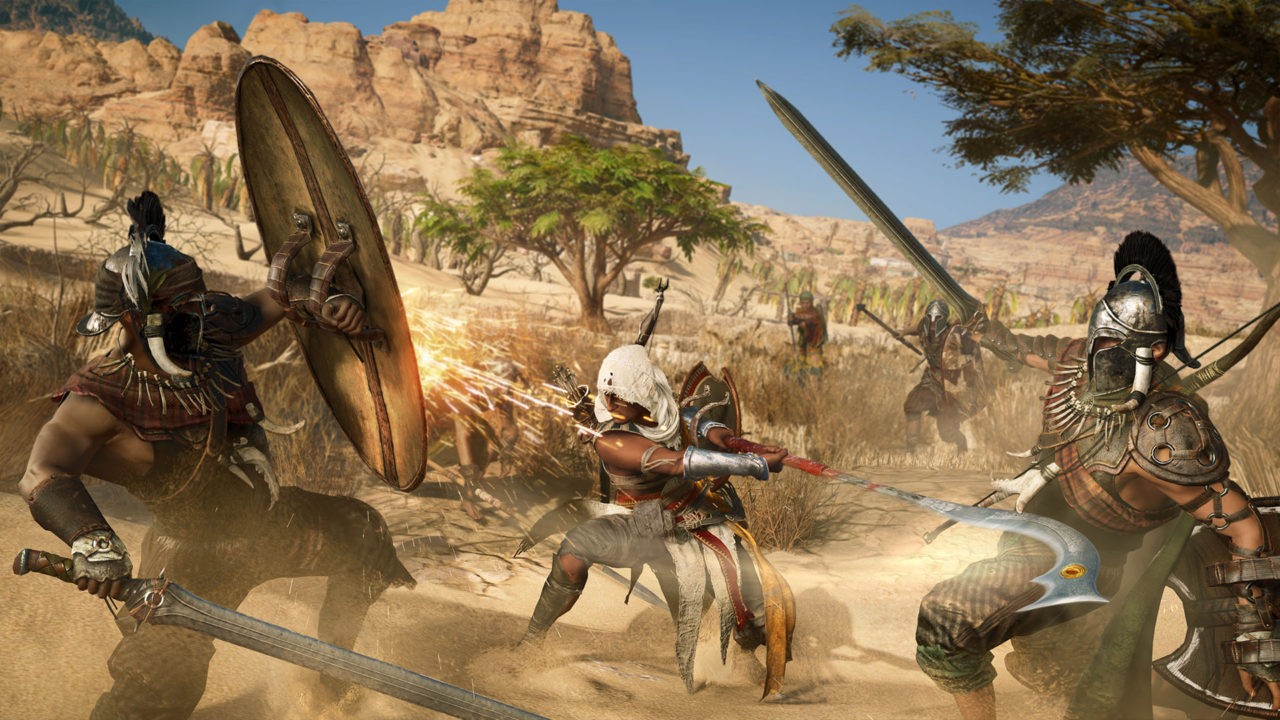 Is there a world in which, rather than measuring virtual worlds by square miles, we can measure them by intricacy and degrees of freedom? Can we pare down the paper-thin NPCs to a dozen (or fewer), but give them the long and interesting story arcs that would befit a supporting cast? Are we so far past the point where quality is outstripped by quantity that we are doomed to explore environments that lack anything more than their surface attractions? I hope not, but every release of this kind seems to suggest just that.

Assassins Creed: Origins is not in any way bad; I would say that it is in many ways “pretty good.” I frequently enjoyed my time in Egypt, despite the merciless grind. I just wish that, rather than incessantly pushing for bigger worlds with more icons to clean, Ubisoft would seek out the heart of the series. If you enjoy open world action games, this one is big, beautiful, and full of things to do. But if you are looking for something beyond the Ubisoft Formula, you may very well find yourself disappointed.