WIRED, a leading leftist tech magazine, is terrified by the thought that corporate “diversity” protections might apply to conservatives and white males at Google.

The site published a piece interviewing a number of Google’s most notorious ideological witch-hunters and racists, including individuals who are repeatedly named among the company’s worst offenders in James Damore’s anti-discrimination lawsuit.

One of the employees interviewed, Liz Fong-Jones, is accused in Damore’s lawsuit of having “repeatedly discriminated against Caucasian males”. The lawsuit also provides evidence to back up the allegation, noting that Fong-Jones, who holds a managerial position at Google, publicly made a racist comment, saying she could “care less about being unfair to white men.” 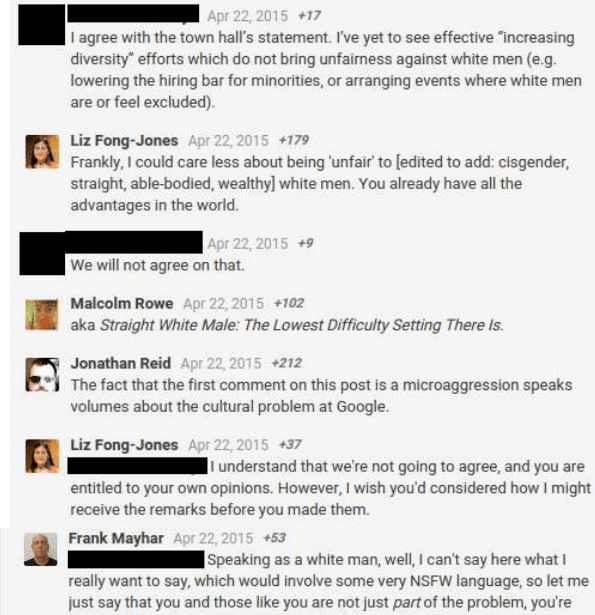 Damore’s lawsuit also revealed that Fong-Jones believes that “benefits to everyone as a whole” justifies discrimination.

WIRED uncritically repeats the claim of Fong-Jones and others that exposing discriminatory statements in this manner constitutes “harassment” and “doxing.”

In addition, the piece also repeats some demonstrably false claims without any attempt to fact-check them. For example, the piece reports that material regarding Fong-Jones appeared on the web forum Kiwi Farms following the publication of James Damore’s memo calling for more viewpoint diversity at the company, and subsequent reporting by Breitbart News and Vox Popoli.

However, a cursory search of the Kiwi Farms forums reveals that Fong-Jones had been targeted by the site’s users since at least February 2017—five months before Damore’s memo was written, and long before any coverage of Fong-Jones appeared in the alternative media.

Another Google employee interviewed by WIRED was engineer Colin McMillen. Comments from McMillen are also referenced in the Damore lawsuit, including one instance in which he dismissed concerns about discrimination against Caucasians at the company as “stupid goddamn devil’s advocate bullshit” that “drives out women” at Google. In another screenshot, McMillen calls for fellow employees to be “arrested” for talking to a right-wing blogger about discrimination at the company, on the grounds that doing so potentially “puts specific Googlers’ lives in danger.”

WIRED also interviewed Alon Altman, a senior engineer at Google who has openly admitted to keeping blacklists on fellow employees at the company, for no other reason that they hold conservative beliefs. In August last year, Altman called on Google’s management to “severely discipline or terminate” anyone who agreed with Damore’s call for more viewpoint diversity. Altman also threatened to resign from the company if Damore were not fired: 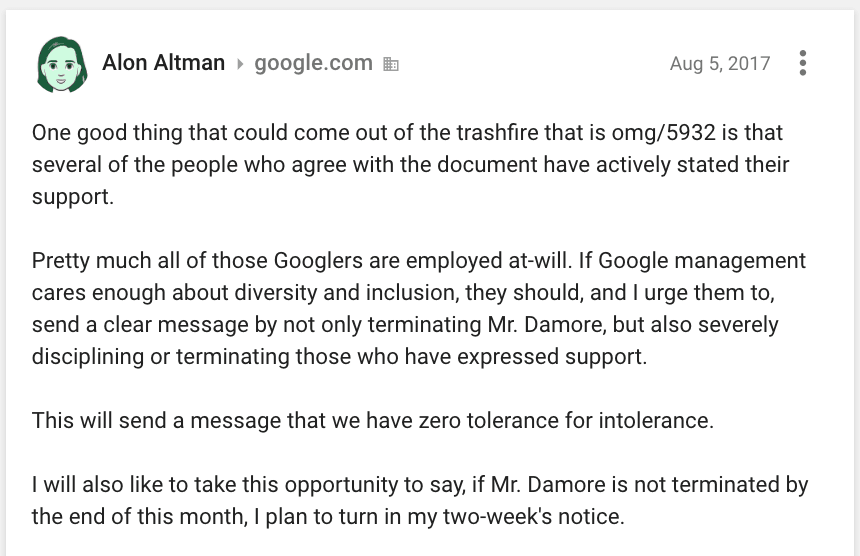 Even though WIRED referenced the Breitbart News article in which Altman’s comments were published, they did not reference the comments themselves. According to WIRED, the fact that their interviewee called for people who support viewpoint diversity to be fired is not worth mentioning, even as Google is being sued for political discrimination.

The focus of WIRED‘s article is that Google’s harassers are somehow being “harassed” by having their harassment exposed. It’s the kind of mind-boggling coverage that echoes recent reporting on psychology professor Jordan Peterson’s viral interview with Channel 4’s Cathy Newman.

When Newman received a drubbing from Peterson after she attempted to portray him as a sexist, progressives in the media attempted to shift the narrative to “online harassment” directed at Newman. Actual evidence for this so-called “harassment” was scarce; Metro UK noted that a social media user had called Newman a “f*****g idiot,” and others “commented on her appearance.” No further examples were offered.

This is what @MetroUK defines as "vile online abuse."

It's hard to believe that even mainstream reporters can be this stupid, so I can only conclude that they are being deliberately disingenuous to stop @jordanbpeterson being invited on TV again. pic.twitter.com/S8iXyidSUA

WIRED‘s article is in a similar genre. Having been called out for racial and political discrimination, Google’s social justice warriors are now complaining that they are the ones being harassed. Will anyone believe them?