Numerous individuals alleged to be members of Google’s management team have been caught bragging about forming blacklists to impact the careers of colleagues with different political beliefs.

In a series of screenshots from 2015 onwards provided to Breitbart News by a verified Google employee, individuals described as left-wing Google management employees can be seen discussing the ways they punish their colleagues both inside and out of the company.

“While Google appears to be doing very little to quell the hostile voices that exists inside the company, I want those hostile voices to know: I will never, ever hire hire/transfer you onto my team. Ever. I don’t care if you are perfect fit of technically excellent or whatever,” declared former employee Adam Fletcher in a post on Google’s internal, staff-only Google+ network: “Internal Plus.” “I will actively not work with you, even to the point where your team or product is impacted by this decision. I’ll communicate why to your manager if it comes up.”

“You’re being blacklisted by people at companies outside of Google,” he continued. “You might not have been aware of this, but people know, people talk. There are always social consequences.” 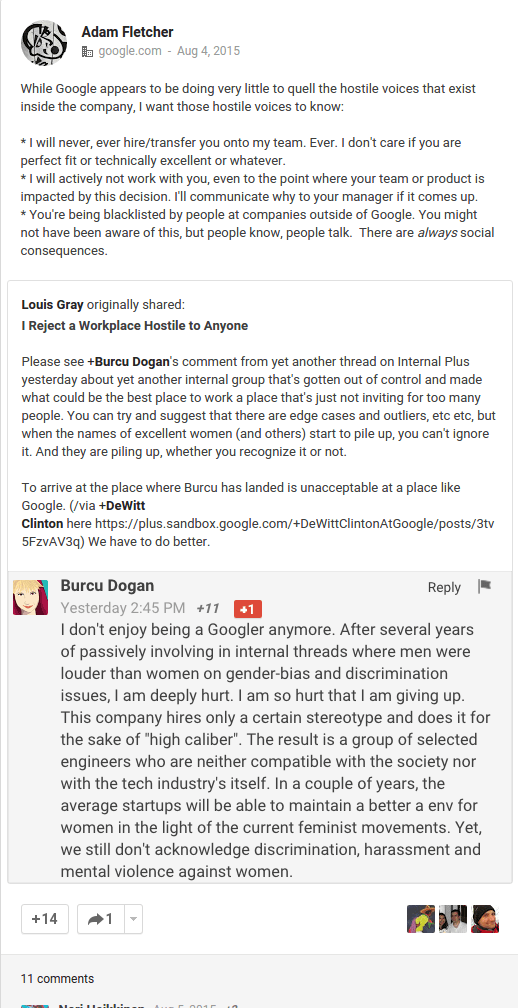 “One of the great things about Google’s internal communication mechanisms (G+, mailing lists, etc), is that, as a manager, I can easily go find out if I really want to work with you,” wrote another individual described on social media as a Google manager, Collin Winter. “I keep a written blacklist of people whom I will never allow on or near my team, based on how they view and treat their coworkers. That blacklist got a little longer today.”

In the comments, one Google employee can be seen asking, “Are such blacklists allowed at Google?” before another added, “I would talk to legal before assembling a list of people who are possibly creating a hostile workplace.”

“And now I know that if I ever sue Google for harassment I should demand to see all manager’s shit-lists to see if this was something management already knew and thus let happen (my tormentor could be on there and not dealt with). It would probably increase the settlement aware considerably,” he continued. “I would encourage anyone else getting mistreated at Google to do the same.”

This week, a Google employee’s ten-page document went viral, after he called for more ideological diversity at the company.

As reported by Breitbart Tech’s Allum Bokhari, “The Googler’s 10-page manifesto criticized the company for maintaining an atmosphere of political groupthink, in which employees with viewpoints that challenge leftist narratives are forced to keep their mouths shut for fear of losing their jobs. He also criticized Google for ignoring the latest research on gender differences and their interplay with the lack of women in STEM jobs.”

The employee’s manifesto quickly prompted extreme responses from left-wing users, including one SJW, Emily Gorcenski, who claimed she would “beat the sh*t out of him.”

Gorcenski frequently retweets and expresses support for It’s Going Down, an extremist far-left Antifa organization, who have previously doxed and harassed college students, and encouraged violence against Trump supporters.

Alon Altman, who according to social media posts is a senior software engineer at Google and who describes himself as an “intersectional feminist” and uses “they/them/their” pronouns, was also seen in leaked screenshots urging Google management to fire employees who agreed with the anti-political correctness manifesto that was revealed this week.

In leaked screenshots, Altman added that should the employee behind the manifesto not be fired by the end of the month, he would hand in his resignation notice. 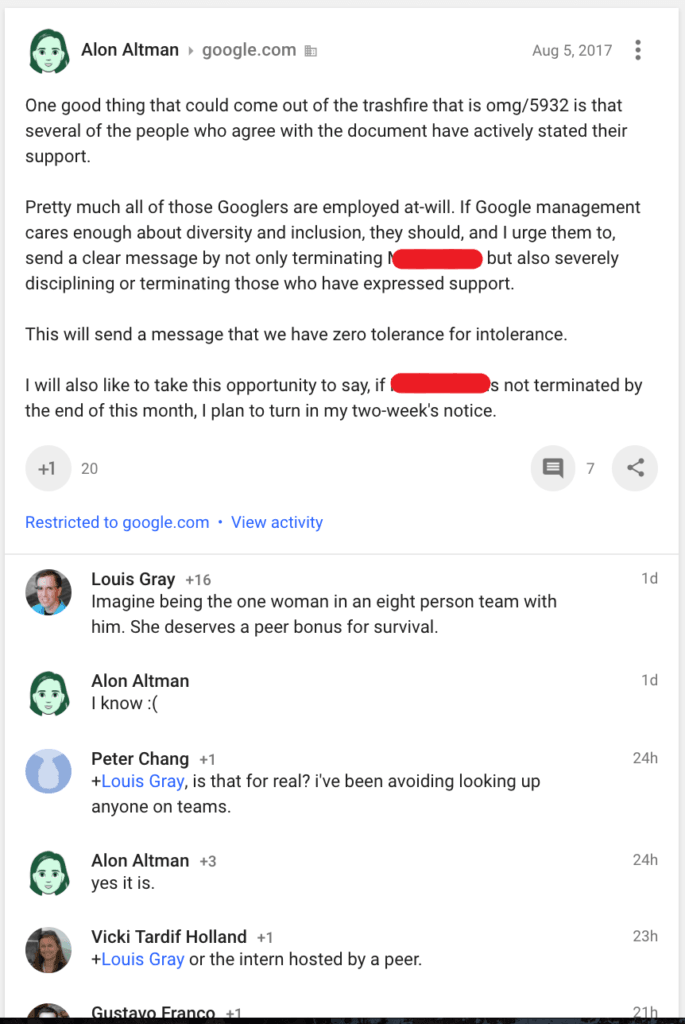 Cowan continued to reference a post from Google dissidents, who were discussing the blacklists being created by an “SJW cabal” at the company, before defending the concept of punishing anti-SJW employees.

“To be clear: this is, in my opinion, perfectly acceptable,” he declared. “Quoting this as if it were some egregious abuse of power, or of your rights, is laughable… My life, happiness, and mental health, are worth too much to me to burn my precious happy-fu working with people I find contemptible, unpleasant, or even in some cases merely irritating.”

After being warned that keeping blacklists could result in him being reported to Human Resources, Cowan then bragged on Twitter that they were “threats I ignored, naturally, and which ironically grew the list substantially.” 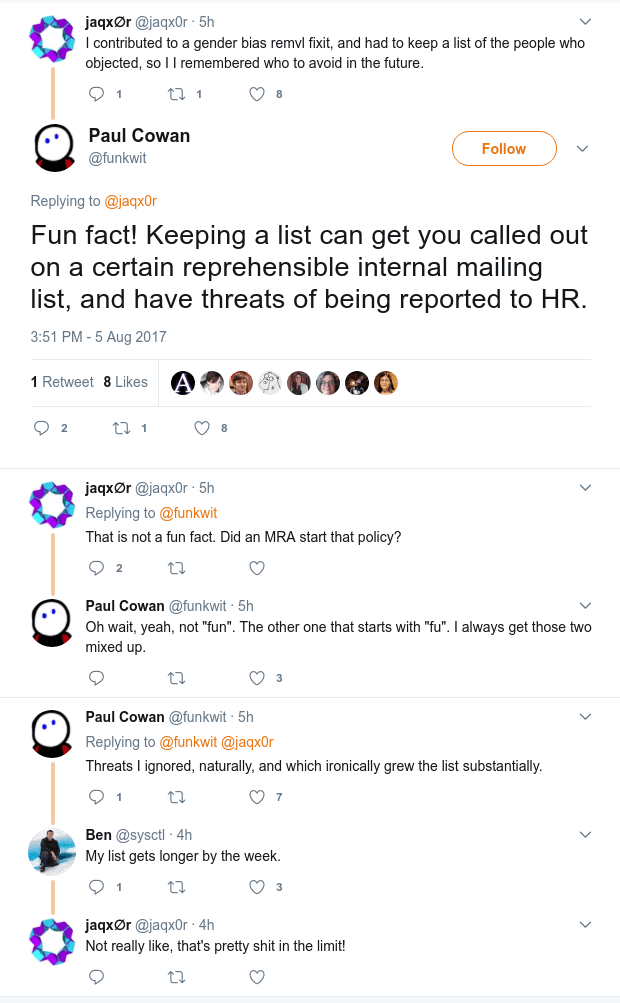 In older posts, Kim Burchett, a now ex-Google employee and Antifa supporter, also discussed blacklists in a post on Internal Plus.

“I am considering creating a public-inside-google document of ‘people who make diversity difficult’,” claimed Burchett. “I am thinking of something like google doc that accepts comments, and which calls out those googlers who repeatedly made public statements that are unsupportive of diversity, with links to those statements so that readers can decide for themselves.” 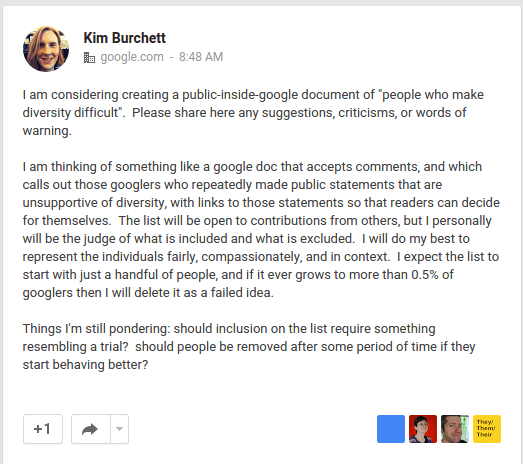 On Burchett’s alleged Twitter account, she displays the Antifa logo as her profile picture, and follows numerous Antifa accounts, including It’s Going Down.