Facebook has apologized for a recent user survey which asked if pedophiles should be allowed to request sexual images from children on the social media platform.

The Guardian reports that Facebook has apologized for a recent user survey which asked users to outline how they believed the company should deal with pedophiles grooming children on the platform. One question stated, “There are a wide range of topics and behaviors that appear on Facebook.” It continued, “In thinking about an ideal world where you could set Facebook’s policies, how would you handle the following: a private message in which an adult man asks a 14-year-old girl for sexual pictures.”

Another question asked whether an adult man should be allowed to ask for sexual pictures of an underage child on Facebook, the options ranged from “Facebook users decide the rules by voting and tell Facebook” and “Facebook decides the rules on its own.” 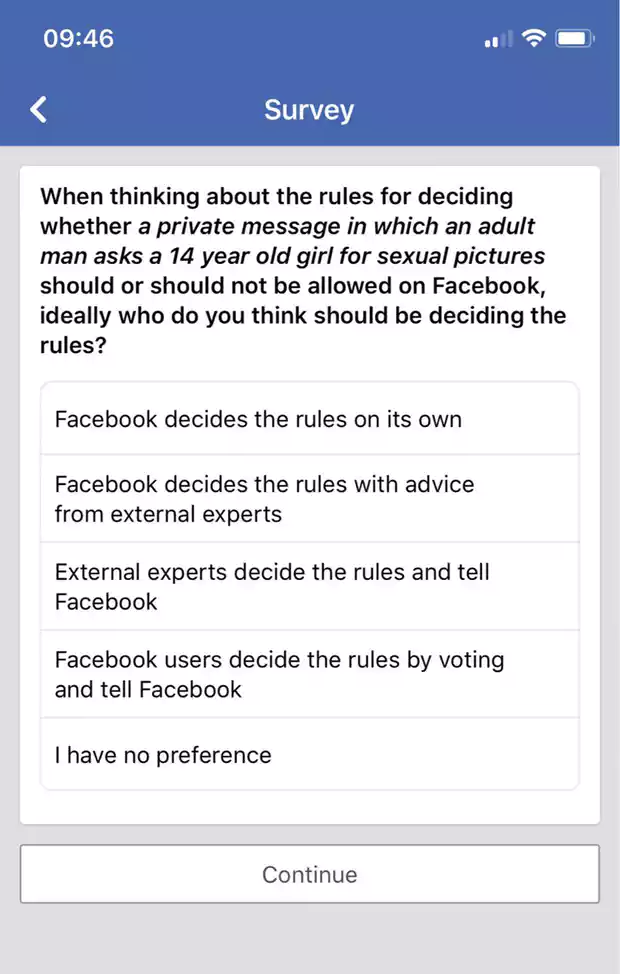 Yvette Cooper MP, chair of the Home Affairs Select Committee in the UK criticised Facebook for the survey saying, “This is a stupid and irresponsible survey,” she said. “Adult men asking 14-year-olds to send sexual images is not only against the law, it is completely wrong and an appalling abuse and exploitation of children. I cannot imagine that Facebook executives ever want it on their platform but they also should not send out surveys that suggest they might tolerate it or suggest to Facebook users that this might ever be acceptable.”

The social media giant’s VP of product Guy Rosen stated that the survey was “a mistake,” and continued to say “We run surveys to understand how the community thinks about how we set policies. But this kind of activity is and will always be completely unacceptable on FB. We regularly work with authorities if identified. It shouldn’t have been part of this survey. That was a mistake.”

We run surveys to understand how the community thinks about how we set policies. But this kind of activity is and will always be completely unacceptable on FB. We regularly work with authorities if identified. It shouldn't have been part of this survey. That was a mistake.

A company spokesperson commented on the survey saying, “We understand this survey refers to offensive content that is already prohibited on Facebook and that we have no intention of allowing so have stopped the survey. We have prohibited child grooming on Facebook since our earliest days; we have no intention of changing this and we regularly work with the police to ensure that anyone found acting in such a way is brought to justice.”