The “racist” leaflets which UK anti-terrorism police cited as the reason to detain conservative journalist Lauren Southern and bar her from entering the UK have been revealed to be leaflets promoting “LGBT for Islam.”

“You have asked for leave to enter the United Kingdom as a visitor for up to five days. However, by your own admission, on the 24th February 2018 you were involved in the distribution of racist material in Luton,” declared a document which was handed to Southern while she was detained last weekend. “I believe that your actions whilst in the United Kingdom present a threat to the fundamental interests of society and to the public policy of the United Kingdom.”

Dear @AmberRuddHR – you have detained @Lauren_Southern in Calais and prevented her entering the U.K. She is a Christian Conservative. You have sided with Islamists of Luton. You need to make better decisions ma’am. pic.twitter.com/rpAgSEwLI3

However, Southern has revealed that the allegedly “racist material” she handed out in Luton was nothing more than leaflets which read, “Allah is gay,” and “LGBT for Islam UK.” 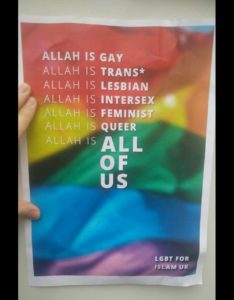 The leaflets, which consisted of an LGBT rainbow flag and the text, “Allah is gay. Allah is trans*. Allah is lesbian. Allah is intersex. Allah is feminist. Allah is queer. Allah is all of us… LGBT for Islam UK,” were handed out by Southern, and conservative commentators Brittany Pettibone and Caolan Robertson in Luton.

“It was for a social experiment video comparing peoples reactions when this statement was applied to different gods. It was inspired by Vice’s infamous ‘was Jesus gay’ article,” claimed Southern to Breitbart News. “Don’t suppose I know how Allah is gay is a racist statement.”

Southern also claimed she was asked a variety of bizarre questions while detained under the Schedule 7 Terrorism Act of 2000, including how she felt about people running Muslims over, how Christian she was, and how she felt about “right-wing terrorism.”

Investigated me under schedule 7 (terrorism act) because of alleged racism. At least they let me identify as Pakistani on my report lol. Still being held by police. pic.twitter.com/LhZFK2d8Jh

For people curious, yes I was held under Schedule 7. pic.twitter.com/FWh6n7vElh

I'm not kidding about this, but during my questioning by the UK police… I was asked about my Christianity and whether I'm a radical. I was also asked how I feel about running Muslims over with cars.

Southern was also allegedly threatened with the confiscation and subsequent hacking of her phone if she refused to give up her password, but was allowed to “identify as Pakistani” on documents.