A popular Jewish-Australian IDF veteran, political blogger, and Australian state government candidate recently found his Facebook page banned, just 48 hours before the blacklisting of Infowars host Alex Jones. Yemini’s Facebook page boasted a follower count of approximately 175,000 but was suspended for “hate speech” according to a notification Yemini received from Facebook. Yemeni has been on the receiving end of death threats on Facebook himself based on his reporting. 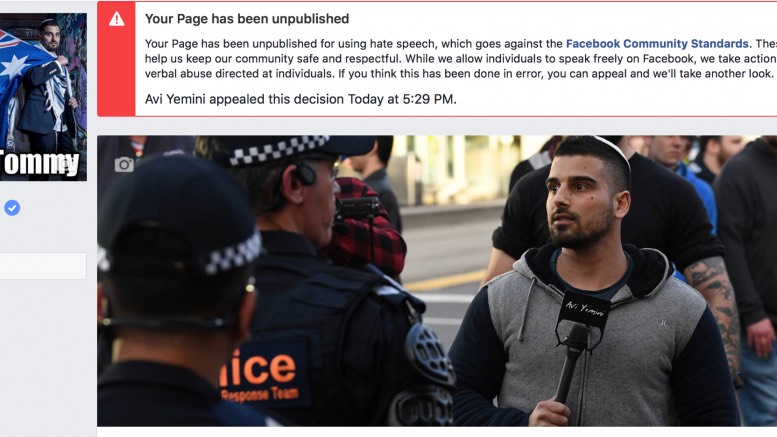 Yemini appealed Facebook’s decision but was told that the page would not be taken off the blacklist. Some have accused Yemini of being banned from the platform for posting the phone number of an ABC News reporter, which they believed was doxing, but Yemini claims that the number he posted is publicly available on ABC News’ website.

Breitbart News spoke with Yemini who provided the following comment on the blacklisting of his page:

Banning my page is another example of Facebook’s political bias and is an attack on free speech. They are purging conservative pages. In this case, they are meddling in the Australian political system and therefore breaching a number of local laws.

I plan on suing them if they do not reinstate it immediately. By banning me, they are preventing me from reaching out to Australian Liberty Alliance voters, which is a form of voter suppression.

I believe I was banned because I am exposing the Islamization of Australia and how it is negatively impacting the country. Many other conservatives around the world have also been banned for speaking out about Islam.

They claim it was for ‘hate speech’ but when pressed couldn’t give me a specific post that breached any of ther terms and conditions.